A compulsive daydreamer teleports himself to 2020 to doodle a future history of the newsmakers of the next decade. 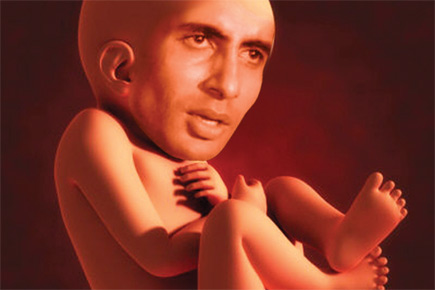 A compulsive daydreamer teleports himself to 2019 to doodle a future history of the newsmakers of the next decade.

The Big B is mighty excited about his new role. Mercury Films has just revealed the closely-kept secret of its next big-budget production Beta. Amitabh Bachchan’s role is that of a foetus. That’s right, foetus. The entire film is about how the mother-to-be and the foetus communicate with each other through the nine months of pregnancy. “He insisted on playing every stage of the foetus, from the single-cell organism to fully-grown creature ready to be born. We have used some computer effects, but they only add to the sheer brilliance of what Amitji has done,” said director Chukki Batra. When a visitor to Bachchan’s blog pointed out that Chachi, Mere Dashavatar Dekho where Kamal Hassan plays a six-year-old, was also ready for release, Bachchan replied: “I have the highest respect for Kamal as a thespian. I wish him the very best.”

Director Ram Gopal Varma’s next film will return to familiar territory: the Mumbai underworld. Since Satya in 1998, Varma has directed 18 films on the subject, including Company, Sarkar, Sarkar Raj, Sarkar Maharaj, Wat, Ghoda, Khoka and Bole Toh. He has also produced 61 films based on the underworld. ‘My new film Saala will have a wholly new take on the crime industry,’ Varma has written on his blog. ‘Something never before explored, even by me. And yes, I maintain that film critics are a bunch of freeloading idiots with evil-smelling gas between their ears, instead of brains.’

Britney Baby, Not One More Time

Oops, she did it again! But Britney Spears says she’ll never do it again. After she was released from a private drug rehabilitation clinic in Santa Monica, California, she issued a statement that she was now clean for life. ‘Ms Spears wishes to say she has been through a total of 27 rehabilitation programmes in the last few years,’ read the statement. ‘But she is absolutely clean for life now. This has been a difficult time, and she wishes to thank her fans for their support.’

Kamal Hassan is doing it again! The master-chameleon plans to bring his weight down to 12 kg over the next nine months for his role as a six-year-old in the upcoming Chachi, Mere Dashavatar Dekho.  “I need to look right for the character,” Hassan recently posted on Twitter. “I am giving it my all.” Sources revealed to a national daily that Hassan may soon be flying to a super-expensive sanatorium in Switzerland for this. Talks are on with daughter Shruti Hassan to essay the role of his aunt, who plays a pivotal part in the film. “There is no Indian actor as professional and perfectionist as Kamal,” said Chachi’s director Sharradd Minoccha. “We could have taken care of it through special effects, but Kamal would have none of it.”

Stephen King, the American horror maestro, has announced that he is working with Google to figure out if his next novel, The Hades Chronicles, can be published only through telepathy. “I was one of the first novelists to publish novels in excerpts over the net,” King says, from his home in Bangor, Maine. “The reasons are two. One, the challenge of a new medium which we can create from scratch. Two, if Hades is printed out, it’s 2,400 pages of standard hardcover format. I want to do my bit to prevent global warming, so telepathy means no trees get cut. Also, you can read the book without having to put the lights on, and thus, save electricity. And Google is the best partner possible for this.” When contacted, a spokesperson for Google CEO Alan Schmidt said that the company was working on ways “to monetise this exciting new technology we are developing”.

MF Husain has a new muse: 18-year-old Malavika Khan, the hot new star in Bollywood. After her debut in the Rs 700-crore grosser Sapne Apne Apne, Malavika has already been signed up by Karan Johar for his next film, to go on sets next year, and, according to reports, her agent is in negotiations with a major Hollywood studio for a film project that may involve Robert Pattinson. “I have watched Sapne 107 times,” said Husain, 101, from Dubai. “I have already planned a series of 76 paintings portraying Malavika as every major female figure in the history of the world.