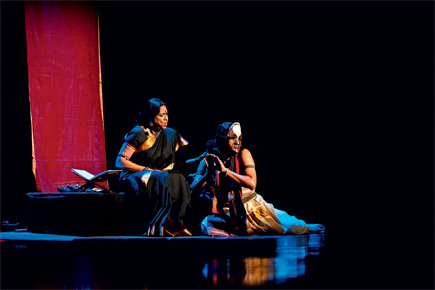 
In 2004, the English and Marathi poet Arun Kolatkar gave the snake sacrifice myth of the Mahabharata a contemporary twist with his haunting long poem Sarpa Satra, the idea of which struck him after a communal riot. Now, a play by the same name based on the poem, directed by the Chennai-based playwright Gowri Ramnarayan, brings out and centrestage the angry Janmejaya’s appalling scheme to rid the world of all snakes. A musical with English, Telugu, Tamil and Sanskrit vocals and Bharatnatyam-based interpretive dance, it’s a faithful airing of Kolatkar’s anti-establishment, postmodern retelling of the myth through the viewpoint of the snakes.

In the myth, Takshaka, the king of Naga snakes, has administered a bite of death to King Parikshit, Janmejaya’s father; Parikshit’s grandfather, the Pandava hero Arjuna, had annihilated the Khandava jungle with the wanton use of his new weapons of mass destruction. King Janmejaya’s response to his father’s murder is to target all of snake-kind. He has his powerful priests arrange a special havan, a ritual fire, to attract all snakes into its raging flames. Not just Takshaka himself, but also his entire kingdom of Nagas, including Naga women and younglings. Mass madness, Kolatkar poem notes, grips even otherwise sober minds of the land as they back Janmejaya’s decision.

So begins the holocaust. ‘The sickening smell of snake-fat [from the ritual fire]… continues to flow throughout the land’; snakes, hugging their younglings, keep crawling into the havan as the fire leaps and leaps.

Will all snakes perish for an act of terror committed by one malcontent? Just when it seems so, the snake Jaratkaru dispatches her son Astika to dissuade the king. Astika is the issue of a human-Naga union; in Kolatkar’s retelling, the human father has abandoned Jaratkaru. Still, Jaratkaru is free of hatred of the human race, as she tells Astika to go save his kin from death and his patrimony from deadly sin. In Kolatkar’s poem, only Jaratkaru and Astika are blameless. The humans are revelling in blood.

Can Astika dissuade the vengeance-drunk king from mass murder? Or will the king calmly proceed to wash off the sin of genocide with a ritual bath? It’s the sort of question that finds an echo in modern life sickeningly often.

On 23 November, Sarpa Sutra was performed to a standing ovation at the National Centre for Performing Arts in Mumbai. In fact, at most places, the play cast a powerful spell that lasted long after the performance. Was that mainly a result of Kolatkar’s vision? The inevitable question loomed in the coastal air long after.

The play’s narration, done by Ramnarayan herself, a former deputy editor with The Hindu, uses Kolatkar’s biting verse for the most part and remains faithful to the poet’s sardonic, critical tone. The director does bring more to the stage, however, with the inclusion of Bharatnatyam-based dance and period costumes. This makes the poem’s theatre adaptation more of “a period drama, not a contemporary one”, says Ashok Shahane, Kolatkar’s publisher, friend and first reader. Shahane, who attended the NCPA performance, would have preferred contemporary costumes, however. “At least the character of Astika could have worn jeans and a kurta,” he says, to convey a classic look with a specific political and intellectual mood.

But the audience’s response suggests that it was pleased enough with the play the way it is. Sarpa Sutra attempts and largely manages to pull off a juggling act with its postmodern subtext and its classical form.

The play, while featuring music and dance of some accomplishment, nevertheless stumbles in a couple of spots. Near the end, for example, it lapses into a kitschy preachiness— something Kolatkar avoids in the original poem that has inspired it.

One actor plays all the male characters, from Janmejaya to Astika, and the transition from one such character to another tends to be jarring at times. Also, the actor mis-stresses several of Kolatkar’s English iambs and anapests.

That’s the proverbial blemish on an otherwise capable piece of acting with some refined dancing.

All said, in questioning Ved Vyasa’s ‘establishment’ telling of the myth, the play does stick to the tone and vision of Kolatkar’s composition. The ‘establishment’ version has explanations that can be read as partial justifications for the actions of the three culpable characters—

the snake-terrorist Takshaka, Arjuna, who started the chain of murder with his weapons of mass destruction, and the vindictive Janmejaya.

We are told that in killing Parikshit, Takshaka was acting out a curse pronounced by a sage whom Parikshit had once insulted. As for Arjuna, well, when the fire-deity Agni plies him with super-weapons and points him to Khandava, what’s a guy to do? In other words, Arjuna was going by divine fiat. And Janmejaya, misled though he may be, is supposed to be acting out of filial piety.

In contrast, Kolatkar’s poem and Ramnarayan’s play investigate the murky motivations of these characters. Why, for instance, does snake-terrorist Takshaka not kill the culpable Arjuna instead of the innocent Parikshit? The character of Takshaka is especially puzzling. He has an impish streak, but that does not explain his actions. Why does Janmejaya inflict terror upon an entire race for the murder of the father he never got to know, since Janmejaya was a baby at the time of Parikshit’s death?

Can many murders, or even one, avenge Parikshit’s death? For that matter, why did the ‘heroic’ Arjuna act so uncharacteristically in razing an entire forest with its innocent residents and luxuriantly sustainable ecosystem?

Kolatkar and the play hint that the actions of the three fallen characters can be blamed on their positions of dominance. They are power junkies with sanction from their societies, and, without recourse to a power-de-addiction programme, they have lost their compassion, to say nothing of a sense of proportion.

Shockingly, the superstar gurus of the land aid and abet Janmejaya. Among others who lend respectability to the pogrom, Vyasa, the mythical documentarian-

poet of the Mahabharata, chooses this ritual for the debut recital of the epic. In typical sardonic vein, the poet Kolatkar wonders how the wise of the land can so readily set aside their principles to get plum posts as holy executioners, instead of referring the king to a good shrink.

In the end, the innocent young Astika makes Janmejaya call a halt to the proceedings. Kolatkar’s poem ends with Jaratkaru sending her son to the sacrifice. The play chooses to show Astika’s dialogue with Janmejaya. And that makes for a happy ending: an expanding cascade of bloodshed is halted by an act of reconciliation.

Kolatkar’s narrator wonders whether the flames of vengeance really go out, or whether the embers of the same continue to smoulder deep down, waiting to re-erupt.