The chasm between feeling and reality in Kashmir 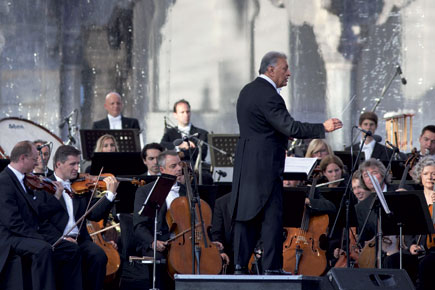 The chasm between feeling and reality in Kashmir


The SUVs raced down Srinagar’s Boulevard Road. They crossed one barricade after another without resistance. The soldiers checked the VIP stickers on windshields or looked in to see if the guests were carrying the invitation cards, and waved them on. At the designated parking lots, a couple of kilometres from Shalimar Bagh, the guests got off their vehicles, and were made to sit in other cars or buses, with an armed policeman in tow. They zipped through the narrow road leading to the garden, with a few local bystanders watching the spectacle. The guests alighted outside the Garden main gate, passed through metal detectors, adjusted their bow ties or Dior shades and walked in.

In 1981, during a concert in Tel Aviv, Zubin Mehta announced he would conduct Tristan and Isolde, an opera written by Richard Wagner, who was Hitler’s favourite composer. In the midst of protests, a holocaust survivor jumped to his feet and unbuttoned his shirt to show Mehta his scars. Now, India may not be comparable with Nazi Germany, but separatist leaders in Kashmir and their friends in Delhi had tried their best to persuade Germany to call off the concert at Shalimar Bagh. Separatist leader Syed Ali Shah Geelani called it the “nefarious design” of “a Jew who propagates Zionism.”

But there was no possibility of a Tel Aviv redux in Kashmir. Only about 2,000 passes to the show were issued. Many Kashmiris who managed to get a pass found policemen at their doors for security checks.

An hour before the concert, most seats at the venue had already been occupied. The best seats were reserved for politicians. Behind the first two or three rows, where the most important dignitaries like the Chief Minister and the German ambassador were seated, people kept shuffling seats to get a better view. The socialite mother-daughter duo of Bina and Malini Ramani too were there, hopping from seat to seat, throwing air kisses at people they knew. Radha Kumar, a former Centre-appointed interlocutor, also arrived, dupatta draped over her head. Actor Akbar Khan was also there. A day later, on the return flight to Delhi, he learnt from the owner of an upholstery store that saffron grew in Kashmir.

After short speeches by the German ambassador, the Chief Minister and Zubin Mehta, the Ehsaas-e-Kashmir (Feeling for Kashmir) concert began. Mehta and his orchestra first played a beautiful piece with a group of Kashmiri artists. But later, when they were playing Tchaikovsky and Beethoven, many in the audience started growing restless. Some clapped at inopportune moments, sometimes in the middle of a composition. A member of the state legislative council sitting next to me kept fiddling with his iPhone, the concert guidebook lying at his feet. He picked it up after the orchestra had finished playing Beethoven’s Fifth symphony. I thought the music had finally roused him. But he just glanced through the Chief Minister’s message at the beginning of the booklet.

For the handful who had come for the sheer love of music, it was a wonderful treat. This, despite the unsatisfactory acoustics, a largely unappreciative audience and actor Gul Panag as compere, whose insistence on using Urdu spelt doom—especially when she meant to say taawun (co-operation) and managed towuun (which in Kashmiri is ‘the worst of hells’).

Even as Mehta was leading his concert, a parallel protest concert called Haqeeqat-e-Kashmir (The Reality of Kashmir) was being held at a park on Srinagar’s Residency Road. I went there in the afternoon. The event was to begin in the evening, but the organisers had put up banners about human rights violations in Kashmir, including the forced disappearances of young men in the past two decades of insurgency. At that time, journalists outnumbered the audience here, and many of them flocked around separatist leader Mirwaiz Umar Farooq. He was talking to the TV cameras. Minutes later, two men accompanied by a young girl and two women entered the park. “What is happening to us is also haqeeqat,” one of them shouted. The man, Saifullah Farooq, and his friend Irshad, turned out to be former militants. “No one is bothered about us. We have nothing to eat, we have no jobs. My daughter cannot even get into a school,” Farooq said, pointing at the young girl. His wife said they lived in an empty Kashmiri Pandit house in old Srinagar. “Even this is used as an insult against us,” she said. “They only address us as the family that lives in the Pandit house.” Farooq pointed at Irshad. “His heart has developed a hole, but nobody holds our hand,” he said. While the young girl stared at me, I noticed Farooq’s shirt had two upper buttons missing. He spoke very agitatedly. As he invoked his haqeeqat again, the Mirwaiz, surrounded by a group of his followers, quietly shuffled away.

Geelani is not the kind of person who watches movies. But he should perhaps make an exception for The Band’s Visit, a 2007 film about an Egyptian police band that arrives in Israel to play at an Arab cultural centre but gets lost, ending up in a remote Israeli town. Through the events of that one night, the film beautifully portrays the lives of both ‘enemies’—how similar they are in their ordinariness, in the hope and disappointments they live with, and in the happiness they seek. In a single scene, the film powerfully shatters a stereotype when the band’s young trumpet player helps an inexperienced Israeli woo a shy girl. The trumpet player’s role is essayed by Saleh Bakri, whose father, the prominent Arab actor Mohammed Bakri, made Jenin, Jenin, a film on the 2002 Israeli massacre in the Palestinian refugee camp of Jenin.

During an award ceremony, an emotional Saleh thanked his father, who he said had “taught me to love mankind” and his mother “who taught me to bear the burden of life in this country and stand strong.” In her acceptance speech, Israeli actress Ronit Elkabetz turned to the film director and said: “You reminded us of a thing or two that we have already managed to forget. You showed us what would happen if we stood before each other, Jews and Arabs, and looked each other in the eye.”

There is a lesson there. If Mohammed Bakri had prevented his son from playing that role due to his political convictions, it would have been an immense loss to both the film and the actor and to thousands of people who watched the film and were inspired in one way or another.

Music does not change the reality of Kashmir. It continues being a conflict zone. But throughout history, there are examples where music has led to the bridging of gaps considered unfathomable. In the spring of 2008, the New York Philharmonic played in North Korea and even a dictator like Kim Jong-il allowed it. Last year, the UAE-based SharQ orchestra, led by Mohamad Hamami, played a beautiful piece, Bamyan, as a tribute to the two statues destroyed by the Taliban in 2001.

It is a pity that when Zubin Mehta conducted soulful music, the aam Kashmiri was not there to enjoy it. But it was necessary to give it a chance. It is in a park in Srinagar that the relatives of those who have disappeared in Kashmir’s bloody conflict gather every month. Maybe Mehta will be inspired to conduct music in that park one day. If he could for Gilad Shalit, then he can do it for Nazir Ahmed, who went missing in September 1990 and whose mother Mogli died a few years ago in the hope that some day Nazir would return.