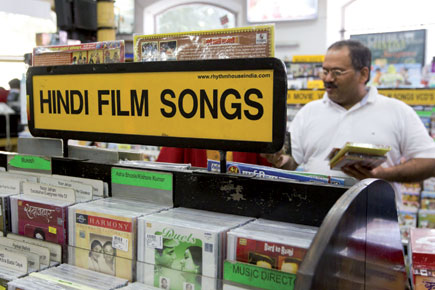 
On a dark monsoon afternoon, a salesman at a high-ceiling music store in Mumbai discusses an upbeat fusion track with a customer. It’s from the latest album released by a band called Recharge, says Ateek Khan, 42, who is dressed in the store’s distinctive red half-sleeved shirt.

Khan has worked here for 16 years and specialises in Indian classical, regional and devotional music. “When I joined, I did not know much about these genres,” he says, “Over the years, I have learnt a lot about them.” Three-quarters of a century after it first opened, Rhythm House is still in business. Knowledgeable salesmen and its cosy ambience are among the reasons that people all over Mumbai still schlepp to its famous Kala Ghoda outlet to buy music in physical format.

In this era of iTunes, the shop’s survival is an achievement in itself. Among the more recent casualties of the online wave was Music World, one of India’s biggest chains of music stores that pulled down its shutters in June after serving as a beloved destination for music lovers in many cities. As late as 2011, the chain had 100 outlets across the country.

“Over the past few years, the onset of digitisation of music and shift in consumer preferences towards music and video downloads has rendered the business model unviable,” says Sanjay Gupta, head of marketing at the Kolkata-based RP-Sanjiv Goenka Group, which owned the chain (and of which Open Media is a part).

Planet M, a Mumbai-based chain started by the Times Group and now owned by Videocon Retail, has reworked its entire market addressal strategy to regain sales and profits, which hit a low in 2010. From a peak of 200 stores primarily devoted to music, the chain now has 70 outlets, mainly in the big metros, selling toys, T-shirts, computer games and mobile phones, in addition to DVDs and select CDs of music. According to Sanjay Karwa, 45, the chain’s CEO, music sales have been in decline for three years.

Independent music stores are faced with a fate no better. Hiro Music House, which had two outlets in Mumbai, shut its downtown outlet last year; it had closed its Bandra shop two years earlier. In other cities too, music stores are either transforming into gift shops and the like, or simply closing down. For a retail business that fought off the threat of piracy for decades, the blow delivered by online music over the past five years has been stunning.

Mobile phone networks such as Airtel and Vodafone now make up a large chunk of all music distributed in India. According to Devraj Sanyal, 38, Managing Director for South Asia of Universal Music Group, the US-based music company, young music fans are pleased to subscribe to mobile phone services that bundle music along at nominal extra cost. Then there are direct downloads and stream-feeds off the internet, illegal or legal. Websites like Gaana, Saavn and Dhingana, which allow free streaming and downloads (for now), are hugely popular with youngsters, says Sanyal.

Among foreign music sites, Apple’s iTunes has scored a huge success within just eight months of focusing attention on India with tracks sold online for as little as Rs 15 a pop. Spotify, which is looking to enter India, is expected to do well too.

Even physical CDs are selling fast over the internet. By Sanyal’s estimate, online sales—including CDs and downloads—have been rising by 15-20 per cent every month for the past two years.

Amid this digital wave, Sanyal, like thousands of others, continues to visit Rhythm House. “It is the only music store in India that I visit because I have been going there since I was four years old,” he says. “Even today, it’s a sheer joy to stand in that store. But the next generation, consisting of preteens and those younger, want all the world’s music at the touch of a button, highly convenient to discover. They want it to be affordable and they want it on the go, to be portable. When their pricing power comes of age, physical formats are likely to die.”

Until that dire day, however, Rhythm House carries on simply because its owners are committed to keeping it going. “All retailers are under pressure, having to compete with online sellers while paying high-street rents. Food is perhaps the only sector that is doing well,” says Mehmood Curmally, 52, managing director and second-generation owner of the store. “In music retailing, we have the additional problem of legal and illegal downloads. But although sales are declining, we are still profitable. I can’t move to selling clothes. Shutting shop is the last option. We’d like to be involved in this business for as long as possible.”

Located at the head of Rampart Row, a street of galleries, restaurants and boutiques that branches off the arterial Mahatma Gandhi Road in South Mumbai, Rhythm House was founded in the late 1930s by Suleman Nensey, a friend of Curmally’s grandfather.

His father then took over the shop, eventually handing the reins over to Mehmood.

The store became a Mumbai landmark soon after it opened. For several generations of music lovers, no trip to Kala Ghoda was complete without browsing through the racks of Rhythm House and then savouring the purchases at Samovar, a café at Jehangir Art Gallery across the street. The store also features in Salman Rushdie’s 1999 novel The Ground Beneath Her Feet, a sort of alternative story of rock music largely set in Mumbai.

The Curmallys knew most of their regular customers, who included musicians of genres ranging from pop to Hindustani, Bollywood stars such as Shammi Kapoor and even top lawyers—India’s Attorney General Ghoolam Vahanvati among them—who sought refuge in its aisles after arguing difficult cases in the nearby Bombay High Court. Yusuf Curmally, Mehmood’s uncle who worked at the store for years and now lives in Switzerland, remembers the actress Nargis, playback singer Kishore Kumar and music director Anil Biswas as regular patrons, and also recalls attending to sarod maestro Ustad Ali Akbar Khan and sitar exponents Ustad Vilayat Khan and Pandit Ravi Shankar.

With such a robust retail heritage, the sentimental attachment that current and former Mumbai residents above a certain age harbour for Rhythm House has helped sustain its legend. “It is one of those Mumbai spaces that one would always recommend to music lovers and visitors to the city,” says Aneesh Pradhan, 48, an acclaimed tabla player. “My earliest memories of the place go back to my student days at Elphinstone College, when it was a sheer pleasure to have access to a space where you could spend an afternoon listening to music in booths.”

Rhythm House’s music booths were particularly popular with young couples looking for privacy. “The store continues to stand because the people who run it are passionate about music,” says Bashir Shaikh, 68, a former singer with the pop band Savages who went on to work for Polydor, a record label owned by Universal. “When I was in college,” Shaikh adds, “I would visit the store at least once a week and spend up to three hours there browsing and listening to music.”

Curmally, however, knows that nostalgia can help only so much. So while he used to be a familiar sight in the shop’s aisles, offering suggestions to browsers, over the past five years he has been spending more and more of his working hours at his desk in a cramped second-floor office that he shares with other colleagues, attending to orders that people from all over the world have placed on the store’s website.

“A lot of my work is now at the back end,” he says, seated at his desk strewn with files and papers. “Once you have a website, there’s a lot of tedious work involved.”

Online orders were only a trickle when Rhythm House set up its website in 2010, but have picked up quite well since. However tedious the job of servicing these, the website is what has helped the store stem a decline in sales; CD sales have fallen from an average 1,000-1,500 a day in the 1990s to 500 now. To sell even this quantity, says Curmally, the store has to maintain a huge stock. There are still takers for CDs of Indian classical music and fusion, genres that aren’t always easily available online. Visitors from abroad looking for Indian fare also buy CDs in large numbers and value the fact that they can depend on the staff for recommendations.

Some customers come for the store’s DVD collection. “[Rhythm House] lags in world cinema, but overall the collection is quite good,” says Gangadhar Humraskar, 29, an engineer who wants to become a filmmaker and is spotted ruffling through the movies section.

The store is also trying to diversify into music accessories and electronics. Still, it is unlikely that a Curmally will be running the store after Mehmood retires. “I don’t want my children to enter this business,” he says.

Curmally remembers navigating the market shift from LPs to cassettes and then from cassettes to CDs. This time, he senses, the challenge is of a different order altogether.