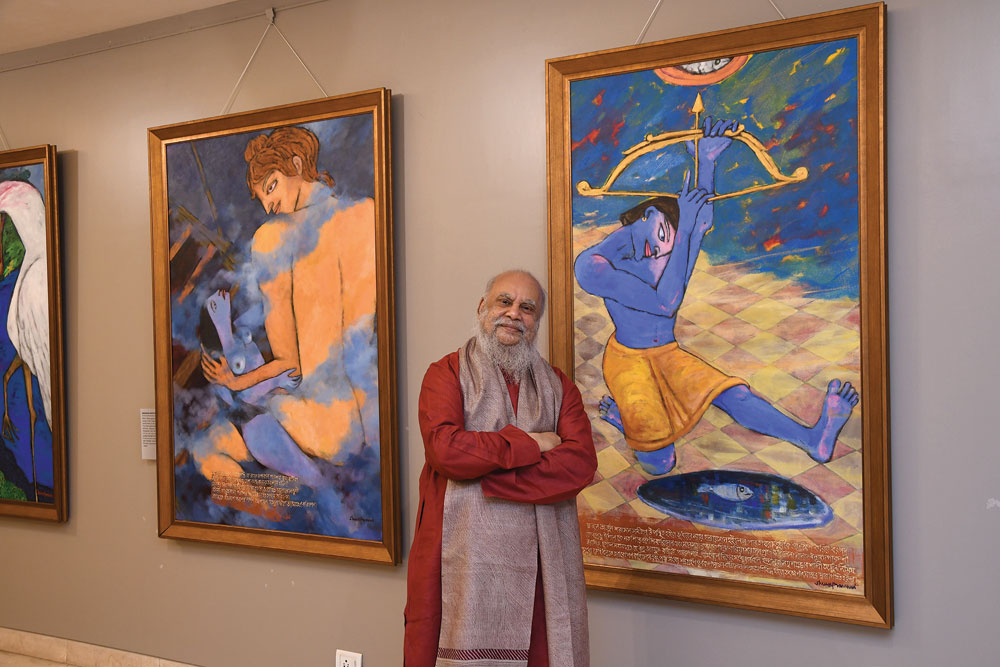 
EVER SINCE SHUVAPRASANNA WAS in school his mother and grandmother would regale him with moral adventures from the Mahabharata. A midnight’s child, born in the Kolkata of 1947, the boy grew up fascinated by the legends of not just the epic’s linchpins, Krishna, Arjuna, Bhishma, Draupadi and Karna but also its less prominent characters such as the shape-shifting Garuda, the dutiful wife Gandhari who stays blind for the sake of her husband or king Dushyanta, who falls in love with the beau­ty of Shakuntala and instantly decides to ask her father, the great sage Vishvamitra, for her hand in marriage. “Even as a child, I collected many books. One of them was a copy of Rajshekhar Basu’s Mahabharata, which was concise and very interesting to read. These early memories of Mahabharata made a huge im­pression on me,” says Shuvaprasanna. Though the Mahabharata has always been a major source of inspiration and comfort for him, he used the pandemic-induced lockdown in 2020 to revisit the classic. Once again, he was taken aback by its continued relevance in the 21st century, and not always in a positive way. “The modern age is very much the age of the Mahabharata. But we have not learnt any lessons from our ancestors. We still have jealousy, revenge, sex, violence and war—all the emotions present in Mahabharata are all around us even today. But thank god, there’s also love and the spiritual wisdom of Lord Krishna that I hope will force us to reflect on our own humanity.”

In the last two years, Shuvaprasanna has focussed on an artistic project celebrating the eternal stories of the Mahabharata. The oil-and-acrylic paintings from this oeuvre are currently on display at Gallery Art & Soul in Mumbai. Viewers entering the exhibition, aptly titled Mystique of the Epic, should prepare themselves to be enveloped by a riot of colour and imagination, as the artist expends the boldest of pig­ments in his arsenal to render even familiar episodes from the epic anew. “Each work is overwhelming and flows beyond the canvas,” says Art & Soul gallery’s founder Tarana Khubchandani. “Seen together, they assume a larger-than-life sense of drama and dazzle.” While revealing that he’s always en­joyed colour, Shuvaprasanna makes a curious admission. He says, with a laugh, “I generally don’t put so much colour in my work. This is the first time. But then I thought to myself, ‘Shuva, how is it possible to represent Mahabharata without colour?’”


Nearly every painting, be it Krishna galloping forth on his chariot in the Kurukshetra battlefield, Bhishma lying on a bed of arrows, Arjuna with his bow or Gandhari’s devotion to Dhritarashtra, is accompanied by a brief text explaining each episode. Written in Sanskritised Bengali, the words on the canvas are an essential element of the show, Shuvaprasanna says. “I never write on my paintings. Again, since this was the first time, I was experimenting with it. I felt like using a differ­ent technique. It’s like you are applying mehndi.”

“The modern age is very much the age of the Mahabharata. But we have not learnt any lessons from our ancestors,” says Shuvaprasanna, artist

A GRADUATE OF THE Rabindra Bharati University, 74-year-old Shuvaprasanna Bhattacharjee has been painting ex­tensively for the past six decades and has exhibited widely both at home and abroad. A story goes that he dropped his surname after art critic Dnyaneshwar Nadkarni advised him to shorten his name. He once met the actress Rani Mukerji who thought he was from Karnataka. “She was shocked to hear me speak fluent Bengali. Later, I revealed my full name and we had a good laugh,” he quips, adding that the Bollywood star has a few of his paint­ings in her personal collection. Often dominated by fantastical elements, Shuvaprasanna’s art is a window to his inner world. No wonder, when asked to describe his style he replies promptly, “expressionist”. He says, “What is the difference between impressionism and expressionism? The Impressionists were interested in capturing an ‘impression’ while the Expression­ists believed in the ‘expression’ of their emotions. Most painters in India are Expressionists, myself included.” Shuvaprasanna was once associated with the Calcutta Painters’ group. At this age, however, he finds that he is no longer easily swayed by other artists or movements. He is not affiliated with any group and prefers flying solo. Of the Western artists, he reveres Pablo Picasso and Marc Chagall for their “unique perspective”. Closer to home, he feels the Santiniketan masters like Rabindranath Tagore, Nandalal Bose, Benode Behari Mukherjee and Ramkink­er Baij were the original poster boys of Indian modern art. “Un­like other Indian painters, they were not inspired by European modernism. They looked back at India’s own rich heritage and developed their language around oriental concepts. Nandalal Bose, for example, was inspired by Japanese techniques, as was Vincent van Gogh. He never used oil. So, for me, personally mas­ters like Nandalal Bose and Tagore were pioneers who worked at a grassroots level and made art for everyone. Despite their humble methods, their work was revolutionary. These painters invented the idea of modern art in India,” he says.

AS A BENGALI boy growing up in the 1950-60s, Shuvaprasanna’s first lessons in art stemmed from his furtive visits to the Kumortuli neighbourhood. Observing artists and potters producing sculptures of gods and goddesses was a daily preoccupation for him in childhood. Furthermore, his family home was near College Street, which at the time was a hotbed of Marxist romanticism and a site of student protests. All these influences, he admits, went on to shape him. Bhadralok Bengalis, one might speculate, are inclined towards art and literature. But Shuvaprasan­na’s father, a well-to-do doctor, dismissed it as a silly profession. “I was more popular with my father’s pa­tients as I used to sketch their portraits while they waited to see him. They were very happy with me, my father not so much,” he says. “He wanted me to be a doctor, like him. But I was completely in love with painting. He thought that art was a waste of time. It took me many years to convince him otherwise.” The second time Shuvaprasanna’s father got upset was when his son decided to marry Shipra Bhattacharya. It was an inter-caste marriage. What’s more, Shipra was Shuvaprasanna’s student. “Only twice in my entire life has he asked me to leave his home. Once, when I told him about my decision to become an artist and the second time, when I said I want to marry Shipra. But, of course, like all parents, he eventually came around,” says Shuvaprasanna, who, much later in life, set up his dream home with Shipra in the Salt Lake area.

Kolkata has been a muse to Shuvaprasanna over the decades. The city was a recurring motif especially in his twin series Metropolis and Middletone. For many years, he found inspiration in not just the people, places, sights and sounds of his hometown but also the local animals, birds, swans and even the ubiquitous crow. During the 1990s, he had devoted himself exclusively to Middletone, a body of work designed to give a voice to the downtrodden.

SHUVAPRASANNA IS ONE of the most high-profile artists working in Kolkata today. Among other powerful politi­cal connections, he has Chief Minister Mamata Banerjee’s ear. Banerjee herself is a hobby artist. Shuvaprasanna claims to have given her a few useful tips. He says of her art, “She’s a good artist. She is not academically trained but that shouldn’t be a problem for anyone wanting to paint. She’s very coura­geous and confident about everything.” Besides his artistic vocation, he also runs the influential Artsacre Foundation in Kolkata. “He was committed to giving back to the art commu­nity and he’s done that in a big way with the foundation,” says Khubchandani. Initially, he faced difficulty—even hostility within his fraternity—launching the project. He is blunt but not bitter when he says, “Bengal is beautiful. But nobody will support you if you want to do something big. Everybody is sus­picious and jealous. The problem is that every Bengali thinks that he’s a better intellectual than the other.”

“I generally don’t put so much colour in my work. This is the first time. But then I thought to myself, ‘Shuva, how is it possible to represent Mahabharata without colour?,’” says Shuvaprasanna

Founded in 1983 as an artist’s village, Artsacre Founda­tion was earlier located in Gopalpur. As Shuvaprasanna gained more recognition and financial success, he bought 4.5 acres of land in New Town and moved the institution there. Artsacre, he says, has always been his dream project. Today, it is a centre of creativity, music and visual arts equipped with in-house facilities like an auditorium, amphitheatre, library and artists’ quarters. “Artsacre started out as a space for nurturing younger artists who were struggling and didn’t have much institutional support,” says Shuvaprasanna, re­calling that he had travelled to Paris following the launch of Artsacre with an unusual ambition—to see if he could invite artists Max Ernst or Marc Chagall to visit his campus. “Those days, these two were the biggest names in the Parisian art world. Perhaps, I was too ambitious to think that I would convince them to come to Kolkata, and it turned out to be difficult as I was merely a young artist with no connections.” Back in Kolkata, he read a news item announcing Günter Grass’ upcoming visit to the city. Shuvaprasanna went over to meet the German author and offered to help him with his stay. Soon, the duo became good friends. While Pandit Ravi Shankar had laid the foundation stone for the institute in 1983, Grass inaugurated its modest campus in 1987. He even showed his drawings at Artsacre.

Goutam Ghose’s 2014 documentary Shuva and Me captures Grass and Shuvaprasanna’s camaraderie as well as the exchange of ideas between the two creative personalities. The Nobel laureate was a gifted artist, who drew spontaneously and made sculptures, too. “He was very naughty. He used to work with a particular type of ink that had an ugly smell. Whenever I would ask him about the smell, he would laugh mischievous­ly.” Grass died a few years after the documentary was filmed. Shuvaprasanna says, “He was my friend, guide, philosopher and mentor. He hated hypocrisy. He told me that to be a painter was to be an informed person. The artist cannot live in the ivory tower. He must mingle with society and the people. This was the biggest thing I have learned from him. It changed my entire perspective—for the better, I hope.”

(Mystique of the Epic by Shuvaprasanna runs at Gallery Art & Soul, Mumbai, till May 31)