Talking about women's writing and talking about sex may soon be passé, two of today’s sessions suggest 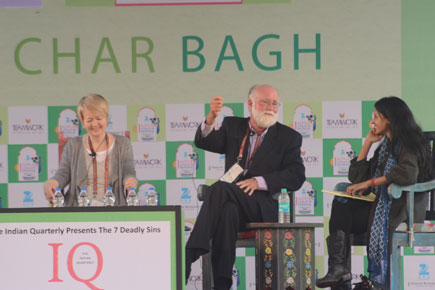 Amongst the most interesting conversations we heard today was an unlikely favourite with a fearsome-sounding title, ‘A Revolution is Brewing’, between three woman writers and an academic who very much resist the usual tags applied to feminism.

Bengali poet and writer Sangeeta Bandopadhyay, Andhra translator and literary critic C Mrunalini and Sukrita Paul Kumar, who grew up partly in Africa, all made up a composite of Indian writing from women, appeared in conversation with Malashri Lal, Dean of Colleges and Professor of English at the University of Delhi, this morning.

The four women trod some of the usual feminist ground, talking about what it meant to write about being a woman in India today. But there were some departures. When asked whether it took courage to write about what is considered taboo—sexual fantasies and desire in the context of middle-class women—Bandopadhyay, the author of fourteen works, was candid. “I don’t think of this as courage,” she said. “This is just what is in me. It is the story I want to tell.” Panty, her novel recently translated to English by Arunava Sinha, received positive critical and popular responses, and is a wonderfully forthright depiction of sexuality, working off a plot wherein a woman takes on the desires of the previous owner of a pair of abandoned panties. Reading one of the book’s vivid passages to the audience, Bandopadhyay made the point that the sensual experience, for example in a young girl just discovering what happens when she rubs her legs together, is just one of the many we must partake of and enjoy.

Similarly, Mrunalini, a bit of a hell-raiser, was unequivocal about her position on women’s place in society; when a gentleman in the audience asked what men could do to make women happy, she declared, “They should learn to be more like women; we are stronger, we are better adapters. Look at a widower; the woman is always stronger!” Bandopadhyay took an opposite stance: “Men should be more like men. They are always focussing on women, in their own sense of their place in the world, and not wanting to acknowledge this.”

Later in the day, another more international panel called ‘Basic Instinct’, took up the thread of sensuality, focussing on writing about sex and sensuality. Novelists Hanif Kureishi, Deepti Kapoor, Sarah Waters and Nicholson Baker spoke about what made them write dirty, with The New York Times Book Review editor Parul Sehgal. Kureishi, the always blunt, always delightful author of such modern classics as The Buddha of Suburbia and Intimacy, said the real revolution now comes from different sources. “The real challenge would be to write about a happy marriage; two people who just want to be with each other, no one else,” he joked. His point was that writing about sex, at least in the West, is no longer taboo and thus no longer subversive in the act; whereas, in his youth, they turned to books of all things, to turn them on. Of course, he acknowledged, in the same breath, that “sex is revolutionary”, adding that this is why people who are, for example, part of political Islam, want to control it.

Sarah Waters, acclaimed author of The Paying Guest and Fingersmith, spoke of the challenges lesbian writers face in reclaiming sexual acts between women that men often want to appropriate for themselves. “A woman who writes about sex may be treated in a different manner from a man who does so,” she said. Deepti Kapoor, author of A Bad Character, was vocal about the problems a woman writer faces writing about sexual transgressions and desire in India, still a problem she maintains. “Women have secret lives, as a result,” she said. And, winningly, Nicholson Baker, author of the infamous phone sex novel Vox, confessed to having won a bad sex writing award—and not caring about it at all. He also described how he at one point wrote books with no sex in them—and then graduated to writing books all about sex.

Both panels point to several truths; that we have the same problems we have always had, on one level, about men’s and women’s roles being delineated, and that the East and the West still have different ways of approaching the sensual or contentious. Bandopadhyay, a charming speaker on the morning panel, would have been a valuable addition to the evening panel, which was more West-oriented; perhaps we are more conscious of the act than we need to be, as she suggested. Indians are ready for books by a writer who can begin a book with oral sex, and not have this matter, plot-wise.