The Kalighat paintings were remarkable critiques of city life in early 19th century Calcutta, even when the subjects were ostensibly religious ones 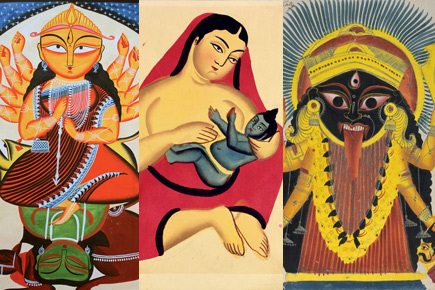 The Kalighat paintings were remarkable critiques of city life in early 19th century Calcutta, even when the subjects were ostensibly religious ones


If you’ve never seen a Kalighat pat painting, you’d be forgiven for imagining it must involve depictions of the goddess Kali. Indeed, the first painting that greets you at the National Gallery of Modern Art (NGMA) in New Delhi is an iconic Kali: wild-eyed, hair loose, a necklace of skulls round her neck and the head of a demon in her hand. But the ‘Kalighat’ in the name comes not from the paintings’ subject matter but from the place where they came into being: the area surrounding the famous temple in the city of Kolkata.

The patuas, folk-painters of Bengal, traditionally painted tales from Hindu myths on scrolls (called pat), which they then used as a visual aid to tell—or rather, sing—a story to their audiences. In this, they resembled folk artists from other regions—the Bhopas of Rajasthan who tell tales of folk deities like Pabuji and Devnarayan with a painted scroll called the phad, or the Bhats who narrate myths with kaavads, painted folding shrines made for them by the carpenter caste of Suthars. The Pardhan Gonds, too, were bards; they became artists in the 20th century.

But the pats of Kalighat are unique. They represent a folk art transformed by its move to the city.

According to historian Sumanta Banerjee, the patuas who moved to Calcutta (as it was then called) in the early 19th century were rural artisans tempted by the prospect of a growing urban market. Settling in the vicinity of the city’s famed Kali temple, they began by changing over from long canvas scrolls (which were expensive and meant for storytelling) to paper, which was cheaply available in the newly industrialising urban milieu, and suitable for smaller paintings that could be made in large numbers and sold as souvenirs to pilgrims.

But the change in material form was only the beginning. While the patuas continued to paint gods and goddesses—though now not narrative scrolls but self-contained paintings, with a maximum of two figures in the frame—they also began to paint events and characters from contemporary life in Calcutta. The NGMA exhibition, a selection of Kalighat pats from the massive collection at the Victoria and Albert Museum, London, contains both these types.

Some of these of deities are unusual. There is a Durga Mahishasuramardini (circa 1860s) image remarkable for its angularity—the round face and almond eyes that would come to define Durga in later Bengali iconography are missing. There is a five-faced Shiva, Shiva Panchanana, which I would not have recognised as Shiva had it not been for the tiger skin draped round his waist.

But even here, where the subjects are traditional religious ones, the patuas often take an irreverent, familiar approach, making the gods both incontrovertibly human and creatures of their time. Shiva Mahadeva, seated somewhat unwieldily on his Nandi bull, has eyes that droop from too much hemp. Hemp-smoking, it seems, had become an established mode of intoxication for Calcutta’s idle rich in the early 19th century, and the depiction of Shiva as an absentminded, hemp-smoking layabout of a husband clearly drew on this association, which was commonly evoked also by panchalis and kobi gan, urban folk songs of the time. Ram, Lakshman and Sita appear as a contemporary zamindar family, both brothers wearing the shamla, a flattened turban we associate with Rammohun Roy.

Krishna, whose butter-stealing childhood and youthful romantic rendezvous make him a particularly perfect subject for humanising depictions, was another favourite pat subject, and there are some truly lovely images here: Krishna with his mother Yashoda, with Radha at his feet, or milking a cow. But the most remarkable of the Krishna pats is one where he appears in disguise: a dark maid in a bright yellow sari, wooing his beloved Radha—by playing a violin! The violin testifies to ‘the growing European influence on the art and music scene’ in the city. But titling the work Bideshini—female foreigner—gives the old Radha-Krishna imagery a brilliantly contemporary spin.

Another sacred subject in pats is the common image of Kali, so drunk with her victory over the demons that she tramples on her husband Shiva in the battlefield. But the patuas manage to make this mythic event strangely real, simply by depicting both Kali and Shiva as realistic human figures, rather than as divine beings whose actions cannot shock us.

This secularisation of the sacred can be remarkably unsettling. And later in the exhibition, when you get to the many images of babus being trampled on by their mistresses, or the supposedly henpecked husbands holding their wives’ feet in a symbolic gesture of subjection, it becomes clear that it isn’t a one-way process. If watching street theatre performances of popular myths influenced the patuas to paint a more recognisably human Kali, the image of Kali trampling on her husband shaped the iconography of ostensibly secular paintings—like Nibaran Chandra Ghosh’s A woman trampling on her lover (circa 1900).

The fate of the babu—the Western-educated Bengali male of 19th century modernity—was a particularly popular subject with the patuas of Kalighat, consistently portrayed as worthy of ridicule: foppish, pleasure-seeking, cowardly, henpecked. Either he’s a sheep, held literally on a leash by a domineering wife, or he’s misled enough to have abandoned a docile wife for an imperious mistress. In general, he is mocked for failing to control his home. One pat in a series of paintings illustrating Bengali proverbs of the time has the babu striding out with carefully pleated dhoti, while the muskrats make merry at home—Gharete chhunchor kirtan, baire konchar pattan.

The educated woman—whether wife or mistress—is even more a subject of satire. She always appears seated on a Western-style chair, all dolled up, whiling away her time playing the sitar, or in more poisonous depictions, having her husband press her feet, or trampling on unfortunate lovers. The bibi of the pat became enshrined as the proverbial upper-class Bengali beauty—but some of those proverbs had a sting in the tail: ‘Won’t do to just dress up and sit around like a poter bibi.’

Misogynist though they are, the Kalighat pats are fascinating evidence of an increasing rupture between elite and popular culture in 19th century Calcutta. The patuas’ sharp, satirical takedown of new English-educated upper class behaviour clearly struck a chord with their not-so-well-off patrons. Also, while a lot of their paintings remained religious in theme, the patuas were unafraid to mock the corruption of the religious establishment: witness the many gleeful depictions of the mahant (priest) of Tarakeshwar who was sentenced to three years’ hard labour in the celebrated Elokeshi case of 1873 and the popular ‘fake Vaishnav’ motif—a rotund ‘saint’ being roundly beaten up by a village woman. Even a cat eating a prawn could be a Biral Tapasvi: a hypocritical Vaishnav who swears vegetarianism but can’t control his greed.

As the 19th century wore on, it became harder for the Kalighat painters to compete with the artistic techniques of mass-produced art: lithographs, oleographs, cheaper and cheaper prints. Scorned by a Bengali upper class increasingly trained to appreciate and imitate European-style painting, the Patua community tried unsuccessfully to adapt, then gradually dispersed. And in one of those ironies characteristic of modernity, men like John Lockwood Kipling—father of Rudyard and principal of the Mayo School of Arts, which was instrumental in changing Indian artistic tastes—began to collect Kalighat pats. The current exhibition, superbly curated by Suhashini Sinha, contains many pats from Kipling’s collection, now housed in the Victoria and Albert Museum in London.

Sinha’s decision to include 15 contemporary paintings is interesting. While most recent works do not have the assured delicacy of the older paintings, there are still patuas who revel in the subversive power of the tradition, commenting on everything from bribery to artistic showiness, but most of all, on modern mores. The masterly Kalam Patua’s Revisiting Kaliyug (2004) has a hunched-up mother walking while her son carries a beauteous young wife on his back, while his clever ‘Abhisarika’ in sleeveless blouse and sari heads out to meet a lover with her mobile phone lighting the way. The modern woman, it seems, still makes the patua uncomfortable.