Nation Building: Homage to the Homeland

From the museum to the street, a multimedia history of nation building 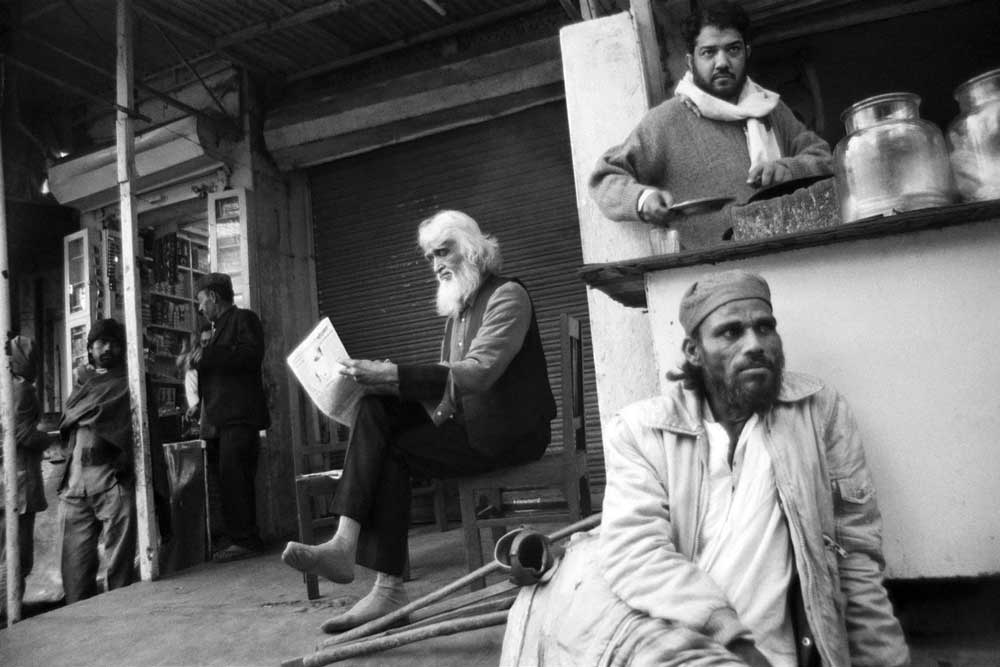 I FOLLOW A GROUP of Class IX students into the Kiran Nadar Museum of Art in Delhi. Outside, a bunch of tiny tots who’ve finished their tour of the museum celebrate being out of school by making hand puppets à la Husain. Inside, the teachers try to ensure that no one accidentally destroys a priceless piece of art as the bemused students stand to attention around the wooden architectural model of the Hall of Nations in Pragati Maidan. Instead of colourful canvases, there are posters with lots of text on the walls.

The sharp, young lady guiding them through their hour at the museum asks the students if they recognise any of the people in the posters. No one answers. “Have you seen any of the buildings?” she asks next. Not a peep out of the students or their teachers. She asks them to define ‘modern’. One smart alec finally says, “iPhone”. The guide sighs loudly and gives a short lesson in India’s Independence, and why there was a sudden and immediate need to provide housing for a number of people. And why architects and artists converged in Delhi to create a new face for the capital of the new nation.

They go into the next room, which is filled with bright and big canvases by MF Husain. The students are more at ease here. This is what an art museum should look like.

But the guide talks about Ghalib and his tomb, the Mahabharata and Moharram. She invites the youngsters to look closely at a painting of a family getting into a cart and asks them to imagine a world where you have to put all your belongings on a cart and leave the place you’ve lived all your life. When she asks them if there are any countries that people are running away from today, the smart alec shouts, “America”. He gets a laugh this time. The children are far more comfortable now that they realise that there are no wrong answers here, and each of the colourful pictures tells a story.

When I meet them again, they’re in a room with Atul Dodiya’s paintings of Mahatma Gandhi doing decidedly normal things like getting a haircut or speaking on the phone. These are placed in frames alongside images from Western art, perhaps to remind us of the randomness of memory or to make a sly commentary about pinning Gandhi onto a wall with other icons. It seems the students have only seen pictures of Gandhi on currency, and the guide explains who the Mahatma was, and what he did to defeat the British. There are also paintings of Khan Abdul Ghaffar Khan at the Mahatma’s funeral. It has turned into a civic science class about how, despite their differing visions, so many people worked together to achieve Independence.

But I have faith in my smart alec, and sure enough, with a true instinct for disruption, he asks the guide about another photograph in the background. It’s a picture of FN Souza with popping eyes and jagged steel teeth that are cutting through a pipe. I decide to move away before the guide has to take them through the next exhibition. Mithu Sen’s tiny brass images of men’s body parts are funny and perceptive, but I’m not sure even this guide can explain the fantastical artist’s straight feminist take on Bhupen Kakkar’s nudes, or the uneasiness of seeing a male body from a female point of view, when all the famous paintings we’ve crossed so far focus on women’s bodies.

The seven exhibitions, curated by Roobina Karode, called Stretched Terrain, are full of such conflicts. They are a sprawling stream of consciousness that asks the viewer to think about various juxtapositions that have made India what it is. I’ve noticed the rural versus modern; women’s identities versus known patriarchal statements; art versus architecture, Indian versus foreign; form versus beauty, image versus reality and, of course, the worth of art. Karode says, “The idea of the string of exhibitions was the idea of a homeland; a terrain which is all interlinked,” and in a way, her usage of the three main figures of the Bombay Progressives would have been clichéd, if she hadn’t used Husain as the central artist in such a thought- provoking way. Two of the exhibitions are devoted wholly to him. “Husain is at the heart of the paradox of India. He provided a complex intelligent counterpoint to the new styles of architecture with his bullock carts and farms. He shows that you couldn’t cancel out the rural and agrarian, and his works used shades of terra-cotta and green—the colours of miniature art. He’s talking about the notion of the nation and he’s talking about India as a colourful mosaic which includes Islam and mythology,” she says. “It’s interesting”, she continues, “that Souza and Raza both left India in the early years of their struggle and faced their hardships abroad. On the other hand, Husain only made short sojourns abroad throughout his life but always came back. However at the end, Souza and Raza both died in India while Husain died abroad.”

At least five of the other shows juxtapose Yatra, the exhibition of Husain’s early works, in some way. Atul Dodiya has created a ‘Cabinet of Curiosities’ called Between the Spider and the Lamp. Husain’s Between the Spider and the Lamp was an iconic painting that was used on an Indian postage stamp, while Dodiya’s three cabinets contain personal items that belonged to the Bombay Progressive artists, as well as other artists like Arpita Singh and Amrita Sher-Gil.

Delhi: Building the Modern has photographs of murals that Husain painted on the Indraprastha building facade in Delhi. An interview with legendary architect Habib Rahman placed alongside mentions that the muralists were paid 50-60 paise per square foot plus the cost of materials by the CPWD. Husain may have started his career as a billboard painter, but by the 1960s, he was an iconic painter. To give his time and effort to Nehru’s vision for such little return and respect says a lot about the man. It says a lot about the architects as well. Habib Rahman, Raj Rewal, Kuldip Singh and Mahendar Raj all studied and worked abroad before coming back to India to create a face for their new nation.

Pushpamala’s The Native Types series presents a juxtaposition to Husain’s images of the woman as mother or the sensual quintessential Indian heroine with her sharply ironic portraits of herself as the ‘filmi’ and Raja Ravi Varma ‘heroine’. And Parthiv Shah’s photographs of Husain in Sadak.Sarai.Sheher.Basti show Husain as both an iconic star as well as the anonymous figure who made a ritual of going to a roadside dhaba to drink tea with beggars and doodle over a newspaper. He’s a performer here, appearing as both outsider—as he peers in through the bars of the National Gallery of Modern Art—and insider whose friends include the who’s-who of the Indian art world.

There’s also the comparison to the other two founders of the short-lived Bombay Progressives Group—Souza and Raza. Husain and Souza had both come down from Bombay in 1948 to see the cult exhibition Masterpieces of Indian Art which had just returned from London. “The Bombay Progressive group formed in 1945 and disbanded in a couple of years as two of the three went to Europe but their influence has been seminal. Look at how they built the modern. They looked at architecture, painting, text, murals. This was a time of identity formation, across all areas, and they formed a plurality of expression. Souza’s work is very different from Raza’s,” says Karode

Which leads us straight to the next juxtapositions: “At this time, alarmingly, there were no women artists,” says Karode. Akbar Padamsee, a member of the Bombay Progressive group took it upon himself to become a mentor to women artists. He used the funds he received in April 1969 from a Jawaharlal Nehru Fellowship to hold the now legendary Vision Exchange Workshop (VIEW), which brought thinkers from across disciplines. It “broke the myth that women are not interested in modern technology,” says Karode.

BUT THE PART of the exhibition that I find most relevant is Delhi: Building the Modern. Perhaps its immediacy comes from the fact that it’s co-curated by Ram Rahman and Karode—both children of architects. It’s mainly based around the photographs and architectural models by Madan Mahatta—the only photographer with the patience and vision to photograph seminal architectural buildings in Delhi in all stages of their existence, and it’s particularly relevant as many of the buildings built in this phase of nationalism are being demolished or ‘beautified’ and ‘upgraded’.

I ask Karode why she decided to look at architecture. She says, “Architecture was the most physical of the arts and it manifested into a physical Nehruvian model of progress. The idea was to make cities and create urbanisation. This kind of transformation, scale, what they were doing to modernise architecture including the materials, techniques, influences and how Indian artists responded to the nation-building exercise is symbolised by a scaffold under the models of buildings as well as the drawings and the structure. My interest was in looking at what was happening… It was a new nation and we learnt by trial and error. There was a sense of beginning, churning, mishmashes.”

These photographs and models are then an interesting juxtaposition to the paintings of Gandhi in the Atul Dodiya exhibition. Is the relevance of these buildings only in these photographs and models as the buildings themselves become outmoded and unlivable? Should we see them as iconic images representing the past? After all, Delhi’s seen many periods of architecture associated with many rulers, although this period of modernism was more heterogeneous as different architects experimented with Indian elements combined with Western techniques. And they’re very different from Lutyens’ vision of Delhi, which was created barely 20 years earlier but favoured the 16th century Palladin style, which in turn was inspired by Greek and Roman buildings. And yet, a photograph of the badly maintained ISBT building, created by one of Corbusier’s followers, seems to ask if these unkempt buildings are themselves worth preserving. It’s a discomforting question in a museum which is traditionally supposed to collect and conserve objects of artistic, cultural and historical importance.

With this show, the Kiran Nadar Museum of Art has taken the art out of the museum, and through film, photographs, architecture and design, brought it to the streets. They’ve shown how a nation was built, one scaffold at a time, and how art and design was an essential part of nation-building. And they’ve illustrated that there are many voices to a nation, including those with differing viewpoints. In this ode to the juxtapositions that built modern India, I can imagine the idealistic men and women of that time saying, ‘Walk on; the home we seek hasn’t yet arrived.’

(Stretched Terrains, a string of seven exhibitions, curated by Roobina Karode, will run at the Kiran Nadar Museum of Art, Delhi, till July 31st, 2017)