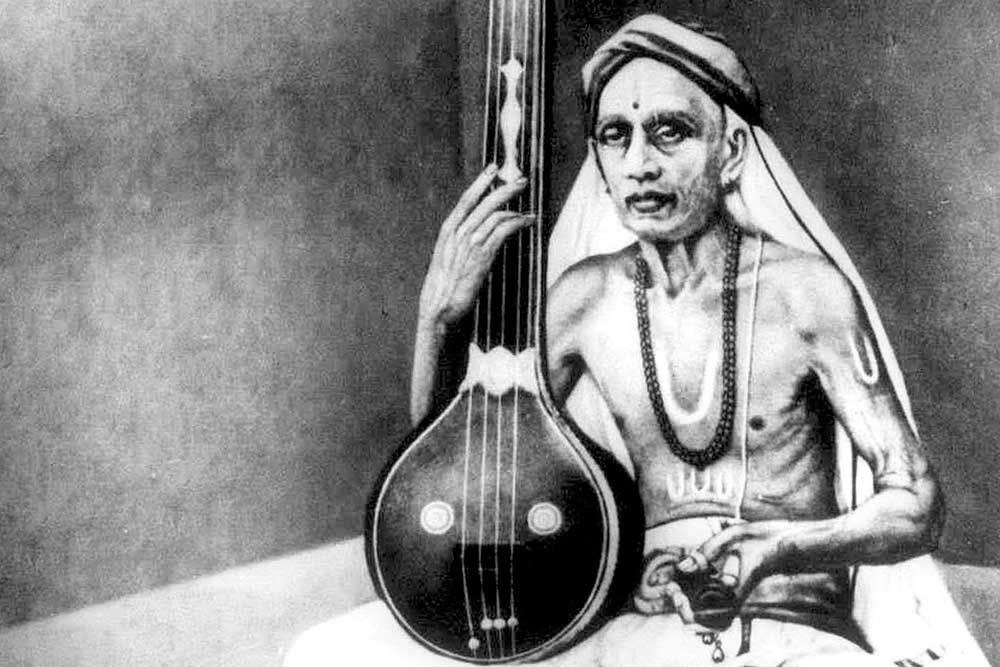 SOUTH INDIAN classical (Carnatic) music concerts are marked by a profusion of songs. A typical recital of, say, a musician like Sanjay Subrahmanyan or the late MS Subbulakshmi would involve about a dozen songs, sometimes more, sometimes less. In comparison, one can count on the fingers of one hand the number of compositions that feature in a Hindustani music concert by, say, the late Kishori Amonkar or Ulhas Kashalkar. A similarly small number of compositions might be performed in a Western Classical concert. Why are Carnatic concerts so reliant on pre- composed songs? A significant part of the answer is, in a word, history.

And 2017 is a good year to think about that history since it marks the 250th anniversary of the birth of Tyagaraja (1767-1847), arguably the composer with the greatest impact on modern Carnatic music. Along with two other composers who were his contemporaries, Syama Sastry (1762-1827) and Muthuswami Dikshitar (1776-1835), Tyagaraja is considered one of the trinity that revolutionised the practice of Carnatic music.

Scholars have a fairly limited understanding of what concert performances were like before the advent of the trinity. Performances in the courts of kings, especially the Maratha kings of Tanjore, seem to have primarily involved elaborate renditions of single ragas, focusing on improvisational aspects. The contrast between these performances, at least what we can glean from brief descriptions in books, and what is seen and heard today is striking.

Current day performances of Carnatic music are characterised by a more or less standardised presentation of a number of compositional forms, including the varnam, the kriti, the ragam tanam pallavi, the padam, the javali, the viruttam , the tillana, and various other small compositions. In a typical concert, some of these compositions will be appended with improvisational elements such as alapana, tanam, neraval, swaraprastara, and tani avartana. Not every concert will involve all of these forms but just about any concert will feature numerous kritis. The kriti has been the dominant musical form in Carnatic music concerts for over a century. In 1927, for example, the musicologist MS Ramaswami Aiyar noted in his book Thiagaraja, a Great Musician Saint: ‘Kritis, in South India, are nowadays the mainstay of a musical performance.’

How did the kriti form come to dominate Carnatic concerts and what was Tyagaraja’s role in this transformation? The compositional form that was prevalent prior to the advent of the kriti was called the prabandha, a term that goes all the way back to a foundational musicological text of Indian classical music, both the Carnatic and Hindustani variants, called the Brihaddesi that dates back to somewhere between the 6th and 8th century CE. The prabandha is also prominent in the Chatur Dandi Prakashika, a 17th-century musicological text, where it is classified as one of the four prevalent musical forms.

From most accounts, the prabandha as performed in the 17th and 18th centuries seems to have been a complicated and ornate composition, with numerous sections. These descriptions suggest that performing even a single prabandha probably took a while. The structural constraints involved in the prabandha form would likely have limited the scope for any individual musician to display her or his creativity.

The kriti, on the other hand, has a relatively simple three-part structure, consisting of a pallavi, an anupallavi, and one or more charanams. The pallavi, or the refrain that the song keeps coming back to, introduces a musical idea, and the anupallavi usually extends this musical idea in a different range of the octave. The structure is rounded off by one or more charanams that elaborate the musical idea. Of course, a number of elements can be added to this basic structure.

It is in this milieu, as composers had started experimenting with the kriti form and its precursors for a couple of centuries, that Tyagaraja emerged as a musical star.

It is not known exactly how many Kritis he composed, but there are today around 700 attributed to Tyagaraja. The composer used over 200 ragas for these compositions

He was born in Tiruvarur, a town in Tamil Nadu, on May 4th, 1767. His maternal grandfather was a court musician and Tyagaraja is said to have grown up listening to songs composed by composers of the earlier centuries, like Purandaradasa and Bhadrachala Ramadas, as sung by his mother and others. Perhaps because they emerged from the Bhakti tradition that emphasised reaching out to common people, many of the composers that Tyagaraja seems to have listened to in his youth had adopted musical forms that can be classified as simple kritis rather than the elaborate prabandha. As a gifted composer, it was not surprising that Tyagaraja seems to have realised the musical potential immanent in using a pallavi, anupallavi , and charanam structure for his compositions.

It is not known exactly how many he composed, but there are today around 700 kritis attributed to Tyagaraja. These are in multiple ragas (he used over 200 ragas for these compositions), talas, and are of varying degrees of complexity. Some compositions are simple enough even for a novice. Other compositions are elaborate masterpieces that would be challenging to all but highly trained musicians.

By the time he died, Tyagaraja had become famous, and musicians and others came from places as far away as Travancore to see him. He trained scores of disciples, who then went across South India to train their own students and propagate Tyagaraja’s kritis. By the late 19th century and the early 20th century, Tyagaraja’s kritis as well as those by his contemporaries and students dominated Carnatic music.

One reason for the shift in the focus of musical performances was, of course, the shift in the nature of the audience. Unlike the earlier period, by the early 20th century, the primary source of patronage and livelihood for musicians had turned from kings and zamindars to the general concert-going public, who had to purchase tickets to performances so that musicians could be paid. One goal of musicians, then, became attracting audiences to their performances.

The kriti form was a good fit to this changed circumstance, for two separate sets of reasons. Musically, as described above, the relative flexibility of the kriti form allowed composers and musicians to present compositions of different levels of sophistication so as to appeal to a range of listeners. And then there are the lyrics.

The lyrics of Tyagaraja’s kritis and the messages embodied in these fit in well with the broader project of Brahminisation of the high arts that was undertaken in the late 19th and early 20th century, partly in keeping with the ideological battles waged by the freedom movement. These messages include an exhortation to piety and devotion, an avowed aversion to wealth, and the promotion of the traditional activities of Vedic Brahmins. Tyagaraja’s kritis appealed to the kinds of audiences attracted to Carnatic music concerts in the late 19th and early 20th century, mostly Brahmins and other upper-caste elites in India.

Stepping away from the past and looking to the present, many of the features of kritis in general and Tyagaraja’s in particular do help widen the reach of Carnatic music. The reliance on devotional content, mythological themes, and the use of religious keywords, all serve to attract a number of religious minded people who might otherwise not attend concerts if such performances were exclusively directed at musical excellence. Indeed, even today, many members of a Carnatic concert audience are seen especially enjoying those moments when the names of various deities, be it Rama or Krishna or Parvati, occur in the course of a song.

This can be seen as both a positive and a negative feature. Compared to a performance focused on the presentation of complicated and abstract musical forms, for example the Ragam Tanam Pallavi, the emphasis on kritis leads to the art form becoming more inclusive. The danger, of course, is that an over-emphasis of the devotional aspects could come to undermine the musical or artistic aspects of the performance.

The prominent Carnatic musician TM Krishna has levelled precisely the latter criticism. In his 2013 book A Southern Music, Krishna has argued that the presentation of several such compositions ‘devalues the very essence of Karnatic concert’s aesthetic’ and that such a conception of a concert, as being merely the presentation of a string of songs, ‘blurs the very intent’ of Carnatic music. Krishna is, of course, not devaluing the importance of the kriti but just the role it has come to play in Carnatic music performances.

But it may just be that the very practice of presenting numerous kritis, one after the other, has created space for a range of musicians to perform in public. Since there are kritis that are simple enough for beginners to handle, even a mediocre musician can sing or play on an instrument in a number of kritis in a concert, wherein the appeal of the compositions themselves rather than the virtuosity of the performer helps hold the attention of the audience. At the same time, the kriti form also opened up vast musical possibilities. No other form in Carnatic music allows for quite so much creativity on the part of the musician, barring the Ragam Tanam Pallavi (RTP), often considered the piece de resistance in a Carnatic music concert.

The kriti offers significant potential for different kinds of improvisation, even while being a pre-composed form. The best example of such improvisation is also the foremost contribution made by Tyagaraja to the advancement of the kriti format: the sangati (literally ‘coming together’). Sangatis are melodic and rhythmic variations of a single line of a composition that typically constitutes a systematic development of a musical motif. Many of Tyagaraja’s kritis involve such variations, often in the first line of the pallavi, but sometimes in subsequent lines as well. Since Tyagaraja’s time, most Carnatic music composers have followed the practice of adding sangati variations to specific lines in compositions.

What is special about this practice, though, is that the performer can also adopt it. Musicians could add sangatis extempore during a performance or they could compose and polish new sangatis in the privacy of their house before presenting it in public. The practice of adding sangatis blurs to some extent the difference between composition and improvisation.

Adding sangatis also allows musicians to showcase their special talents and skills and set themselves apart from their competitors while presenting the same compositions: a musician whose voice is capable of rapid movements might incorporate sangatis that involve such patterns, whereas another musician with a deep voice might incorporate sangatis that explore the lower octave. Such modifications serve to distinguish an art music form based on pre-composed songs from purely religious musical renditions, such as bhajans.

There is some irony in talking about the importance of Tyagaraja for performances of Carnatic music today, a quarter of a millennium after his birth. Despite being a brilliant singer, Tyagaraja himself may never have performed in public (except perhaps as part of the bhajan tradition). All his known performances of music involved select audiences: for example, the court of King Serfoji and the house of a wealthy patron, Kovur Sundaresa Mudaliar. But within half a century following his death, his own kritis became one of the staples of musical performances for people at large. Because of the enormous musical possibilities offered by his kritis, performances of some of his more sophisticated compositions still constitute one of the highest levels of Carnatic concert experience.

MV Ramana
Dr MV Ramana is the Simons Chair in Disarmament, Global and Human Security at the University of British Columbia, Vancouver