‘Museums are a tool of cultural diplomacy,’ says Nathalie Bondil

Curator Nathalie Bondil tells V Shoba that exposure to culture, art and music are integral to our well-being 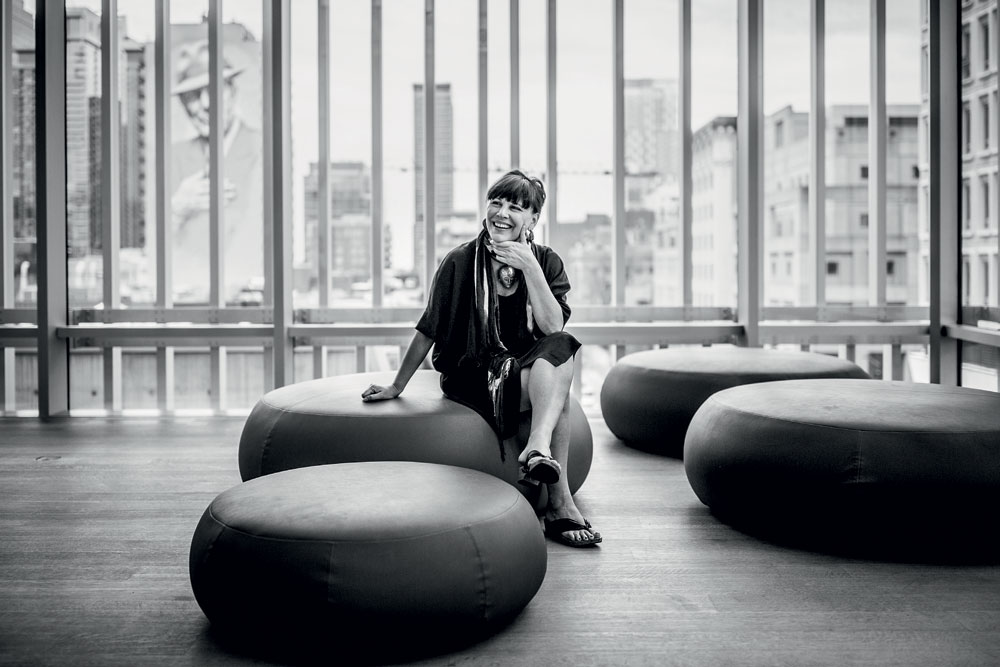 
NATHALIE BONDIL, Director and Chief Curator of the Montreal Museum of Fine Arts, Canada, is recognised as a pioneer in expanding the role of the museum. She has helped create a dialogue between problematic pasts and a more engaged present, hosting artists of various ethnicities to help interpret colonialist art. She has thrown the space open to outliers usually excluded from the cultural experience, such as the homeless, youth at risk of violence and abuse, and patients recovering from depression and eating disorders who, she believes, can benefit from art therapy. Bondil, a French-Canadian, has not just added pavilions and buildings to the museum—an old church in the campus is now home to a concert hall—she has worked with couturiers like Jean Paul Gaultier to create path-breaking exhibitions that have travelled the world. Excerpts from an interview

How many visitors does the Montreal Museum of Fine Arts get? What are some recent additions you have made to accommodate diverse audiences?

With over 1.3 million visitors annually, the MMFA is one of Canada’s most visited museums and the eighth-most visited museum in North America. The museum’s original and temporary exhibitions combine various artistic disciplines—fine arts, music, film, fashion and design—and are exported around the world. Its encyclopedic collection, distributed among five pavilions, includes international art, world cultures, decorative arts and design, and Quebec and Canadian art. The MMFA has seen exceptional growth in recent years with the addition of two new pavilions. It houses the largest educational complex in a North American art museum, enabling the MMFA to offer innovative educational, wellness and art therapy programmes.

Let’s talk about recent projects you are excited about.

Just a few months ago, I opened a new wing dedicated to the Arts of One World with 1,500 works of art from our encyclopedic collections. This new space brings together our museum’s archeology and world cultures collection, one of the largest in Canada, along with contemporary artworks from around the globe. From a fresh intercultural perspective, this wing integrates numerous works by artists from yesterday to today—including a lot of acquisitions from contemporary Indian artists like Gauri Gill, Shilpa Gupta, Bharti Kher—and from every continent that together reflect the richness and diversity of our universal heritage. This title is inspired by the French Caribbean writer, poet and philosopher Édouard Glissant (1928-2011) and his concept of ‘One World’—our universe as it changes and persists through our interactions as well as the ‘vision’ that we have of it. So we have ancient and contemporary works that create a dialogue transcending the centuries. We are also consciously post-colonial, with our collections providing a platform for communities and artists seeking to take back control of discourses on their cultures. The inclusion of contemporary works by emerging Canadian artists of various ethnicities, and art that engages with concerns of biodiversity and the environment are other initiatives we are building on.


The next exhibition I am curating is called The Origins of the World: Nature During Darwin’s Century. One hundred and fifty years after the publication of Charles Darwin’s The Descent of Man, France and Canada are for the first time devoting an exhibition to his era from a dual scientific-artistic perspective. (This exhibition will be presented at the Musée d’Orsay fromSeptember 21, 2020, to January 10, 2021, and at the Montreal Museum of FineArts from February 13 to June 6, 2021.) The Darwinian theory of evolution questions the origins of mankind, his place in Nature, his biological links to animals and his own animal nature in a natural environment, understood as an evolutionary ecosystem. This immense disruption in the sciences, together with the public debates on the subject throughout the century, had a profound influence on the artists who documented it or were inspired by these discoveries and explorations. We will retrace the principal themes of this investigation to support current thinking about the place of human beings and animals in nature, now that biodiversity is under threat and we are entering the Anthropocene era.

How did the art therapy programme originate?

It began as part of the effort to build the MMFA into a humanistic museum by collaborating with the scientific community to build bridges between the sciences and the humanities. For years, I had discussed this holistic vision with my brother, who is a surgeon and a researcher. In fact, it was a dream to have the support of doctors and neuroscientists who have conducted research on the benefits of culture and cultural institutions like museums on a person’s well-being. I strongly believe aesthetic pleasure is anything but a trivial business: it is an integral partof our healthy animality. Over and above developing cognitive and intellectual knowledge, it is equally important to create a school for the senses. It is what distinguishes humans from robots, our emotional intelligence from artificial intelligence.

“I am convinced that in our century, culture will be to health what sports were to culture in the 20th century,” says Nathalie Bondil, director general and chief curator, The Montreal Museum of Fine Arts

Two years into the programme, what have been the major lessons based on the research collaborations to study the impact of art therapy on patients?

Our museum is the first in the world to get doctors to write out art therapy prescriptions. When I first presented the concept behind our International Studio for Art Therapy and Education to the Association des Médecins francophones du Canada in 2018, they thought it would be interesting to support the idea that a museum is an asset to the community and that exposure to culture, art and music makes us feel better. We now know that not only does visiting a museum or going to a concert make us feel better on an individual level, but it also facilitates social interaction between people, between our friends and family. Of course, this idea of ‘prescribing’ a visit to the museum is by no means meant to replace medicine or other medical treatment; rather, it is an additional piece of the treatment puzzle, just as some people would be prescribed exercise. This is just one pilot project among dozens we are working on in our museum. For instance, we also have a project with the Douglas Institute and Dr Howard Steiger, working with people with eating disorders and integrating art and the museum into their treatment programmes. We have 450 partnerships thanks to our programme of ‘Sharing the Museum’. This field of research is expanding day by day and it is exciting to see the humanities link up with science. I am convinced that in our century, culture will be to health what sports were to it in the twentieth century. I like to remind sceptics that only a century ago, it was believed that sports could deform the body and harm women’s fertility.

What is the role of a museum today?

Museums are a tool of cultural diplomacy. Everything that is ‘inter’ is good—interdisciplinary, international, intersectoral, intergenerational—because it is important, especially now, to understand other cultures. We live in a country of citizens from so many different backgrounds and it is so important for everyone to learn from one another and imagine a future together. We must build a global citizenship. I am convinced aesthetics could play a major role in fostering understanding between human beings.

Montreal receives most of Quebec’s immigrants. Our cosmopolitan city grows by incorporating external forces and making them its own. Migrants fuel this hub of creativity. Learning to live together in peace progresses through cultural exchange. Many of the things we do at the MMFA are possible only because we are in Canada. It is easier to be innovative and entrepreneurial here.

Which is your favorite work at the museum?

The Portrait of Hugo Simons, made in 1925 by the German artist Otto Dix of his lawyer and Jewish friend. Dix is one of the most significant modern German painters. Considered a ‘degenerate’ by the Nazis, his paintings were sold or destroyed so the ones that still exist from this era are very valuable. Dix painted this expressive portrait as a thank you to Simons for successfully representing him in a lawsuit. A client had asked Dix to paint a portrait of his daughter. However, upon completion of the painting, he refused to pay it, claiming it did not look anything like his daughter. The case was not only a milestone in the official recognition of artistic freedoms, but also the beginning of a lifelong friendship between a Jew and a German during dark times. In 1933, Dix remained in Germany, where he was hit hard by the power of the Nazis, who banned him from teaching and exhibiting. Meanwhile, Simons fled with his family to Holland. He dedicated himself to helping German Jews escape, with great success. In 1939, he got passage to Montreal, in Canada, with his family. Simons’ children decided to leave the painting to the Montreal Museum of Fine Arts as gesture to thank Canada for accepting them. To me, this is a powerful masterpiece because it has an incredible story behind it.