Mehboob Khan’s classic is now MI21, a wordless, 45-minute recital of live music set to clips from the movie. 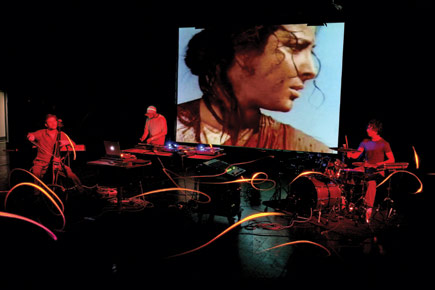 Mehboob Khan’s classic is now MI21, a wordless, 45-minute recital of live music set to clips from the movie.


Mehboob Khan’s classic is now MI21, a wordless, 45-minute recital of live music set to clips from the movie.

What’s captivating British audiences these days is a 45-minute version of Mehboob Khan’s 1957 epic melodrama, Mother India. It hasn’t been released anew, or remade. In the words of the producer, Indy Hunjan, a young visual arts innovator with Indian roots—her father is from India—the film has been “re-imagined” to acquaint the current generation, not necessarily of Indian origin, with the Indian ethos the film portrayed.

Innovative, it certainly is. The film has been re-edited, from the original 163 minutes to 45. It is called MI21, short for Mother India 21st Century Remix. The Edinburgh Festival’s official website describes the new version as, ‘A live film soundtrack performance that re-scores, remixes and re-imagines the iconic early Bollywood film, Mother India.’

MI21 has no subtitles, no dialogues, no songs. No original sound track, either. In the show, the film is the visual back-drop to a live musical performance—an ensemble of turntables, cello and drums. The music, restrained and soulful, brings out the emotions playing out on the screen.

The producer has divided the original film into six scenes. It begins with the marriage of Radha, the main character played by Nargis, moves to her suffering and toil after her husband (played by Raj Kumar) disappears, her tryst with poverty, her attempts to keep her family together and her sacrifices epitomised in the scenes with the village moneylender. Then, there’s the coming of age of her son (played by Sunil Dutt), and the final scenes of the mother killing her son. There’s a seventh section, which is a quick visual re-cap of the entire story. Each section has a two-second break, with live music playing the interludes.

“I did away with the dialogues and subtitles. They are a barrier to communication in the sense that those who don’t know the language would not understand the story,” says Indy. “Remove them, and all viewers have the same experience, whether Asians or non-Asians, the older generation or the current one. The accompanying music helps the audience feel part of the visual journey of Radha’s life.”

Indy has been obsessed with the film since she was a child. “We are three sisters. We grew up in a community where it’s all about boys and boys. My parents never treated us as daughters are generally treated. We were encouraged to assert ourselves.” That perhaps explains her fascination for the determined Radha.

Indy didn’t want a routine job. “I wanted to do something innovative in my chosen field. So I set up a company, Kala Phool. I wanted to take up Mother India as a remix project, but funding was a problem. In the meantime, I experimented with whatever came my way. I organised hip hop festivals too.”

In 2006, Indy met British Asian DJ Tigerstyle. DJ Tigerstyle (a Mauritian whose real name is Alvin Seechurn), is the world’s best known turntablist—and a world champion—with record-breaking albums to his credit. “The moment I saw him, I thought he is the person to bring the project to fruition. He loved the idea right away. The group started expanding as Josh Ford, a well-known visual artist and editor, was roped in. DJ Tigerstyle brought in eminent cellist, Matt Constantine, and drummer, David Shaw.

“The real credit for MI21 goes to the editor and musicians. They aren’t Asians and… yet they managed to recreate the environment with their editing and music.”

In 2007 they completed a ten-minute capsule to show prospective sponsors. The response was immediate, says Indy, adding: “Finally, we had the wherewithal to complete project. It took two years to complete. But I know its life’s going to be much, much longer.”

The new version, a “re-statement” of the epic, as Hunjan says, had its inaugural show in Edinburgh. It was shown in London on 15 August to coincide with the 62nd anniversary of India’s independence. It is now touring major cities in Britain, including Brighton, Bristol, Coventry and Bridlington.

Her childhood obsession with Mother India is only one of Indy’s rationales for making MI21. “It’s about making the new generation appreciate the issues faced by older generations,” says Indy. “How values of yore that the film projects, like single parents, poverty, oppression, the need to keep the community together, resonate today too.” Another is the portrayal of Asian womanhood. “Radha is the role model of an Asian woman. There is an unspoken strength in her. She is not overtly sexualised. She comes out as a powerful individual who puts in as much work and effort as any man for her family’s upkeep and safety. The new generation has a lot to learn from Radha.”

The audiences seem to have appreciated Indy’s efforts because she gushes, “Young and old alike, they liked the show and… they now want to watch the original. What’s amazing is that the majority of the audience is non-Asian and young.”

The Guardian has already called MI21 “a powerful and moving glimpse of a challenging, unwieldy masterpiece”.

Indy is planning an international road show for MI21 in 2010. “I’m already getting dates and venues from Hong Kong, Singapore, other parts of Europe and the US. In Australia, one of the venues is going to be the Sydney Opera House. That’s as big as they come.”

What about India? Indy says: “Not a single response. I wanted to take this project home. Perhaps, people back home are not ready. It would be great to stage it in say, Mehboob Khan’s studios. But I am not going to peddle it if they are not interested. In any case, MI21 is not exclusively for Asians, it’s for all people.”