A Bollywood-style extravaganza based on the Taj Mahal, presented by India’s ‘second lady’. 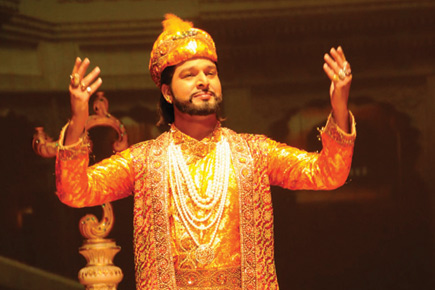 A Bollywood-style extravaganza based on the Taj Mahal, presented by India’s ‘second lady’.

Mohabbat the Taj recreates the legendary Mughal era under Shah Jehan, through glimpses of history, court etiquette, on-stage stylised Urdu dialogue and snippets of musical soirees, packaged into a swirl of razzmatazz, brilliant lighting and bits of Bollywood dancing. With playback singers Udit Narayan, Kavita Krishnamurthy and Alka Yagnik chipping in, the show is truly a representation of an India that is proud of her past and wants to project it in a present-day context.

The play first made its debut in Agra, with daily performances at the Kalakriti Cultural and Convention Centre. Its producer, Ashok Jain, was inspired by the many son et lumiere shows he had witnessed at monuments abroad. Back home, he decided to enrich the concept into a stage event, with live presentations of our music and dance heritage around the well-known theme of the Taj. He was scrupulous about using “settings, costumes and colours that make up our country”. Hence, the show strives to create a consciousness of the cultural pulse of India, unlike normal visitor fare at Agra that stops at its archaeological wonders and related history.

Adding further relevance is the fact that the proceeds of this show are donated to the Al-Noor Charitable Society, Aligarh, which runs three schools and several other initiatives for the upliftment of poor children in the town. The society is a movement spearheaded by Salma Ansari, a well known educationist who is known for her penchant for out-of-the-box solutions to educational problems.

An effort of this nature proves beyond doubt that tapping into our cultural resources and churning out newer modes of cultural representation from some of our oldest themes is an art pulsating with possibilities.