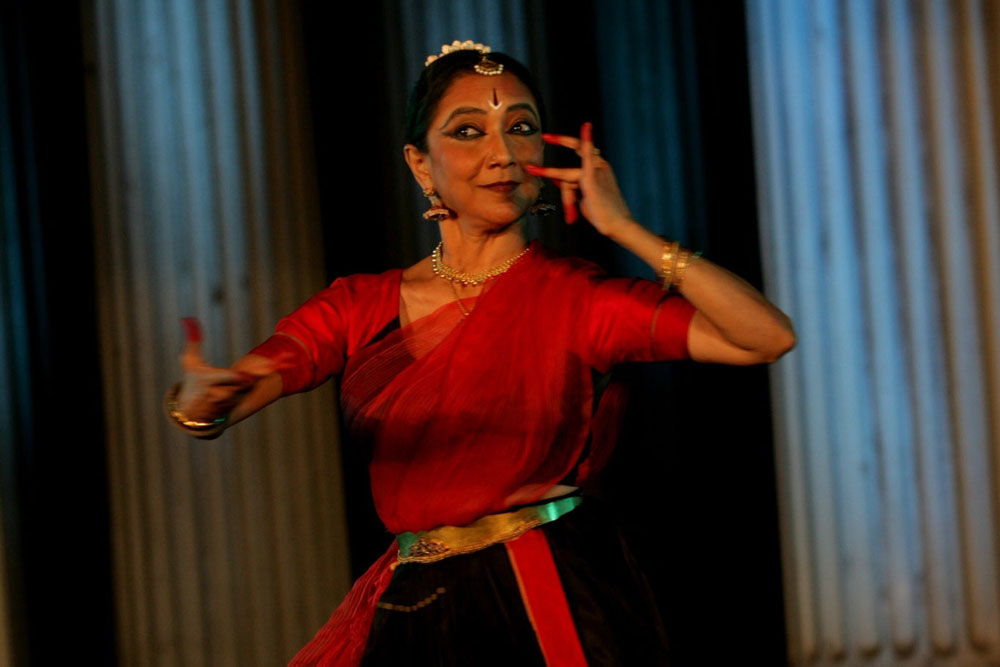 
We meet Leela Samson, a Chennai-based Bharatanatyam dancer-choreographer, for an early lunch at a café in Chennai on March 2nd. This is two days after Samson has curated and moderated an online panel discussion to coincide with guru Rukmini Devi Arundale’s birth anniversary. It is 11.30 AM, and Samson has been awake for more than six-and-a-half hours. She has completed all the activities sacrosanct to her daily rhythm: circling her building in the wee hours, feeding the stray cats and a dog, and collecting herbs from the garden for her tea and kashayam (a concoction of carom seeds, tulsi, lemongrass, turmeric, ginger and honey to boost immunity). She has also wrapped up a three-hour-long class with her group of dancers at Spanda Dance Company on the roof of a friend’s home.

After lunch there are emails to check; a couple of online classes—one with a group of  students from across the globe who, in Samson’s words, “didn’t expect me to get online” but jumped at the opportunity to learn dance from her again; and private lessons with a couple of students in shaping their solos. “It has been a full and a busy year,” Samson says, adding, “but it has definitely been a year that has allowed us to go within a little bit, forcing dancers at large to shift focus from being inherently performance-based to something more contemplative; actually creating new work that is born from a denial of space, lights, people, all the things artists literally live off.”

In September 2020, the Spanda Dance Company turned 25.  This is a collective founded by Samson with a group of dancers who consciously opted out of the solo world and felt the urge to “dance for the sake of dance without being bogged down by having to do all things on your own”. She felt the need to mark this milestone with a series of curated events that’d impact the dance fraternity at large. “You see, artists have gone through life without their personal stories ever being told, or heard,” says Samson. “Their angst, hurt, injuries, challenges—as sometimes life is a mess, but somehow they are forced to project a persona and I think the effort has really been to think of ideas that are truly beneficial to the young dancer who is looking to be stimulated, and is keen on intellectual growth.”

Like Rukmini Devi, founder of  Kalakshetra and a visionary under whose watchful eyes Samson blossomed into an artist from the age of nine, Samson continues to be a constant seeker. Rejecting all labels and notions of guru, mentor, etcetera, in the context of the students she works with, her quest for inclusive learning is deeply influenced by one of the most abiding memories she has of her mentor, Athai, as Rukmini Devi was fondly called. “She was a maverick, eclectic and unpredictable,” says Samson. “But what I will always remember about her is that if she addressed you directly—which she sometimes did—she expected you to reply honestly and bravely. She didn’t harbour any hesitation or lies.”


“It feels good to always be a pariah. I don’t belong anywhere even though I know exactly what’s happening inside,” says Leela Samson, dancer

That quality of commitment to her conviction has also been one of the defining features of Samson’s life. As a single woman with a strong voice of her own, she has, in a sense, occupied posts and positions aplenty, across the country—chairperson of the Central Board of Film Certification (2011-2015), director of Kalakshetra (2005-2013) and chairperson of Sangeet Natak Akademi (2010-2014). Yet, as Samson says, “Sometimes I look back and think of how wherever I’ve been, I’ve always been trying to catch up.” She adds, “You see, Delhi didn’t accept me fully even though I spent 30 years there as an adult  navigating a successful career because, well, I didn’t belong there. When I returned to Chennai to become the director of the Kalakshetra, my alma mater, I was considered an outsider; as someone who had changed. And because I never was a teacher of dance in Chennai, the industry didn’t acknowledge me as one.”

How does it feel to be a solo traveller, I ask. “Nice,” she says, “in hindsight. It feels good to always be a pariah; an outsider who is not part of anything but someone who can look at everything with a pair of objective, impartial eyes. I don’t belong anywhere even though I know exactly what’s happening inside.”

Despite her public persona, Samson’s private life has always remained quiet. That also meant she didn’t have the privilege of legacy or the backing of a family. She had to—literally—make it on her own.

Samson’s father hailed from Maharashtra and her mother was a convent girl who grew up with nuns and had roots in Allahabad in Uttar Pradesh and Asansol in West Bengal. This also meant that Samson grew up negotiating a slew of languages that came her way. At the Kalakshetra, she was surrounded by Tamil, Malayalam and Telugu. As a choreographer, she was obsessed with Sanskrit.

“Yet, I feel that even though I was curious about languages and despite the onslaught of it, I never had the time to master any of them well enough.” And it is here that she says she had to “study extra hard” while preparing for a role in what has emerged for her, as a strong “alternative” career—cinema. In October 2020, Samson played the role of a mother in Rajiv Menon’s short in Putham Pudhu Kaalai, a Tamil anthology of films for Amazon Prime Video.

“When I quit the Kalakshetra in 2012, I took a deliberate decision to concentrate on the creative process because I’d been denied that, thanks to all the administration work; the mental strain had
impacted my body, my responses,” she says. “I wanted to be free of anything that would further bog me down and it’s amazing how when you feel you have nothing, Mani Ratnam offers you a role.”

Nearly six years after Ratnam’s OK Kanmani (2015) and with a handful of films under her belt, Samson says she still asks herself why cinema interests her. “And I think it has perhaps got to do with the fact—even though you have to scrum it because you are a junior artist, in a sense—that what seems to make me happy is the opportunity to be a student again. I like the democratic setup of cinema and I enjoy being told what I need to do; the director is the captain and you are only a tool. As a dancer, I also work with space but I dare not tell the director how to use it; I’m happy to sit back, and let the director call the shots.”

In February 2020, Samson spent 15 days shooting for a Hindi thriller, Kaali Khuhi, in a village on the border in Punjab, and even though she didn’t have a large role— “the character was mostly unconscious”—she was intrigued by the film’s subject. “I accepted it only because of its honest submission of how they get rid of the female child in these villages, and I felt films like these have to be made and we can’t afford to keep pushing such topics under the carpet.”

In January, after a full year of being chased by a young director from Kerala, Abhijit Ashokan, Samson went on the floor to play the lead in a film that tells the story of an elderly woman who is left at an old age home and her desire to find an identity for herself. Around the same time, she also essayed the role of a psychiatrist for an upcoming Telugu thriller Shyam Singha Roy.

“It has definitely been a year that has forced dancers to shift focus from being Inherently performance-based to something more contemplative; actually creating new work that is born from a denial of space, lights, people,” says Leela Samson

“It’s frightening, sometimes,” she says, “of having to get into the skin of a definitive character with a personality that has already been drawn, defined. And yet, cinema, as a medium, is invigorating because I’m constantly learning.”

How different is this from portraying a naayika in a padam from the Bharatanatyam repertoire, I ask. “Well, even though the naayika is ultimately speaking about her feelings, it is a metaphor that is universal. Plus, perhaps it’s my comfort zone; it took me the longest time to find my feet there but, I suppose, dance is somewhere I am most comfortable.”

As a dancer who shares space with young artists looking to craft careers on the stage, Samson is conscious of nurturing an ensemble that comprises dancers who are “friends” and who are a part of a process that is explorative, in a way that dance becomes a joyful discovery. “I don’t sit down when I take a class,” she says. “I walk around them and it makes them stretch their backs; if I am behind them and I’m watching them dance, how does the dance change? I talk to them about these things because I’m keen to produce dancers who are not just bodytrained but also have had the opportunity—like me—to connect with people who have encouraged their intellectual growth, sensitivity levels, influenced their manners, their priorities.”