Jewel beyond the Crown

Thanks to Bollywood, the exquisite Jadau jewellery of Bikaner is no longer the exclusive preserve of royalty 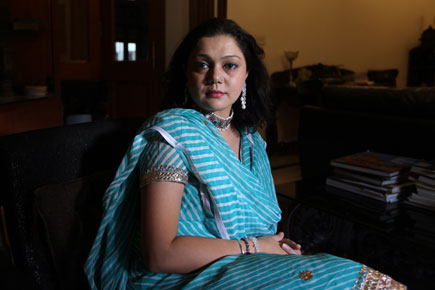 Thanks to Bollywood, the exquisite Jadau jewellery of Bikaner is no longer the exclusive preserve of royalty


There is really no knowing what to expect when you go to meet a princess, but it is still a surprise when Maharajkumari Mahimaji, the third and youngest daughter of the late Maharaja of Bikaner Sri Narendra Singhji, opens the door. Not to a palace, but a two-storeyed residence in a government housing society in Gurgaon. The princess, dressed in a blue-and-white cotton salwar suit, has a warm smile. Her face and neck are bare, no glint of jewels, no glitter of gold. Her pierced ears and nose display no jhumkas, no nath. The only jewellery on her is a silver Cartier imitation bracelet that cost Rs 2.5 lakh, as she discloses later on being asked.

Mahima was raised in the Lakshmi Niwas Palace in Bikaner, where she spent her childhood and teen years. Attended by royal maids, she lived an opulent but cloistered life, a life of royalty. She once broke protocol by taking the keys of her grandpa’s vintage Fiat car from the driver and driving off alone, only to return it damaged. But 16 years ago, a chance meeting with a businessman called Sumeet Sharma at a discotheque in New Delhi changed the life she lived. They fell in love and got married in 1997 without the royal family’s approval. From the palace, she moved to her in-laws’ residence in Gurgaon. She is Mrs Mahima Sharma now, a 36-year-old housewife.

For signs of royalty, you have to look closely around the house. There is a hint, for example, in a black-and-white photograph on a wall in the living room. She’s in her mid-twenties in this picture, and an observant onlooker can spy traditional royal jewellery on her as she hugs her daughter Sannjana, two years old at the time. Mahima’s forehead sports a raakhri, a teardrop shaped pendant that hangs just where her hair parts at the centre. “That’s done in Jadau Kundan,” she says, referring to a style of exquisitely crafted ornaments, with jewels like diamonds, pearls, emeralds, rubies set in textured 22 carat gold.

Each piece is handmade with utmost finesse. The stones are first placed in a gold cast, and this is turned over to a meenakar, who adorns its obverse side with intricately enamelled patterns. Next comes the process of jadai, which involves neatly stuffing all grooves and nicks with molten 24 carat gold (obtained from gold foil). The process also explains the words used to describe such jewellery: jadau for encrusted gemstones; kundan for gold foiling; and meenakari for enamelling.

Mahima’s full regalia comes out only on special occasions like Holi, Diwali and family weddings. That’s when her royal-wear has her in Jadau ornaments from head to toe. “I do not wear my heirloom ornaments with a sari or suit,” she says, “It’s only when I wear the traditional poshaak (heavily embroidered kurti kanchali with an odhni) given to me by my parents, that I wear them. It includes a raakhri on the head, aard on the neck, satkarhas (seven necklaces that reach the waist), haathphool (palm wear), sutarhla (twistable gold bracelets with elephant head-ends), angoothis (rings), baaju bandh (for upper arms), kamar bandh (for waist), bichhiyas (toe rings) with my paayal and mojarhi (shoes). That is my traditional outfit.”

Royal intimacy with Jadau jewellery dates back several centuries. Jadau is a craft of Bikaner and the former princely state’s royals have been patrons of it since the 15th century at least. And for all those centuries, these ornaments were the exclusive preserve of the country’s super-affluent. No one else could afford it.

At the turn of 21st century, that began to change, and how. Jadau Kundan and Meenakari saw a sudden burst of demand. So much so that it quickly became the backbone of the country’s gems and jewellery business, and is one of this sector’s leading foreign-exchange earners today. And for that, you may thank Bollywood.

“Aishwarya Rai was brilliant, the way she carried Jadau Kundan jewellery in Jodhaa Akbar,” says Mahima, “There was so much grace and dignity in the way she wore those jewels.” In Ashutosh Gowariker’s 2008 movie, Aishwarya plays a Rajput princess, and such a character’s get-up would have lacked authenticity without Jadau.

Other Bollywood films—Devdas (2002), Paheli, Umrao Jaan (both 2006)—also served to popularise Jadau. “Everyone who was someone in Bollywood wanted to make a statement, and they could well afford to by wearing such ornaments at weddings and festivities,” says Falguni Mehta, a 47-year-old designer whose bridal and eclectic collections of Jadau Kundan have found a wide clientele in Mumbai’s film industry.

Today, a Jadau necklace set adorned with sparkling uncut diamonds on 24 carat gold, other semi-precious stones and with meenakari work costs anything from Rs 75,000 to Rs 24 lakh. “Sometimes, the price is limitless due to the unique polkis used in the ornaments,” says Mahima.

In his chronicle Ain-i-Akbari, Abul Fazl, one of the ‘nine gems’ of Mughal Emperor Akbar’s court, mentions how the artists of Marwar borrowed the art of meenakari from Mughal craftsmen, blending it with their own expertise in encrusting precious stones to create a unique art form. The hot and dry climate of Rajasthan was particularly amenable to Jadau Kundan meenakari because such high-precision work can only be done to perfection under conditions of low humidity. It is no mean feat to have an ensemble of these small baubles, stringed together by small golden hooks, held magically together for ages without the use of any adhesive.

For all its popularity across the Subcontinent, Bikaner remains the world’s Jadau Kundan capital. Odisha Chief Minister Naveen Patnaik writes of the Rathores’ love of jewellery in his book A Desert Kingdom: The Rajputs of Bikaner: ‘Ornamentation played an integral role in the development of detailing and deployment of texture and colour play. The women revelled in the beauty of fabulous stitchery, tie-and-dyed textiles, gem-encrusted jewels and delectable footwear. Their men craved fine metal work on swords and shields. Homes and fortresses, palaces and gardens were embellished with an amazing display of finesse. Paintings, fine fabrics, statuary, and carving in the wood and marble were an integral part of the ornamental allure that left you drop-jawed centuries later.’

Even now, Jadau Kundan artists believe that on any given day, at least one tola (11.3 gm) of gold flows into Bikaner’s drains as waste—mostly off the hands and attire of local craftsmen after the day’s work. “But that amount of gold,” says Arvind Soni, who is from a family of royal jewellers, “is worth the sacrifice for the magnificence of Jadau Kundan.”