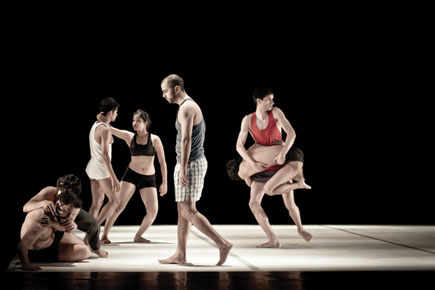 Mandeep Raikhy’s recent contemporary dance work, A Male Ant Has Straight Antennae, raises and responds to this question far more effectively through movement than could be possible in words. Pinpointing such an abstraction is a mammoth task, plagued by convolution, generalisation and jargon. But masculinity, and indeed all gender, is a peculiar sort of abstraction—though it evades language, it finds constant, tangible expression in the body. And if the body is the medium through which masculinity articulates itself, Raikhy’s enthralling piece suggests it may also be the ideal site for a re-articulation.

The body is where Raikhy, Managing Director of Gati Dance Forum, began his investigation, sending the members of his ensemble out into South Delhi’s Khirkee village, where Gati is located, to “observe the male body as though it were an alien”. The dancers reported back with characteristics that intrigued them—gestures, postures, gaits. “There were all sorts of images of gender, of masculinities, sitting in people’s walks,” Raikhy says.

The material brought in by his ensemble allowed Raikhy to create a basic physical vocabulary of borrowed “elements” with which to work. “It’s really like making a language,” he says, finding “a logic between the elements”, combining the elements into clusters, like letter into words, stringing those into phrases and sentences, which are then repeated and layered on top of each other, creating a cacophony of meaning that’s familiar in texture, yet not fully comprehensible.

Creating images based on what they’d found, the ensemble then went about “deepening the images”, exaggerating an element here, repeating another there. One of the most compelling sequences in the piece came out of such a deepening—a duet with his ensemble’s only female dancer, which involved several iterations of a phrase built around the curved-in arm-positioning of muscular men of a certain bearing. “Puffy arms”, Raikhy calls it. “Just that as a graphic was fascinating.” Raikhy admits the sequence is more formal than he initially intended to get in the piece, for which he eschewed his tendency toward abstraction in favour of movement that was more real, raw. But the sequence is an important punctuation for the work as a whole— uptempo and unnerving. What begins as a hypnotic pendulum of arms transforms, over the course of several repetitions, into a menacing gait of the upper body, the swinging motion creating a frenzy of intimidation.

This, perhaps, is what Raikhy means when he describes the sequence as an attempt at “meaning-making through just repetition”. Repetition, here, is in a strictly choreographed sense, with phrases danced in fugue, then in sync, then repeated with minor disconcerting alterations, then sped up—in effect, taking one simple image and scrutinising it from every angle. Not disengaging from the movement its kernel of meaning, but highlighting it through repetition, revealing it as the pivot of the whole thing, as with the arms and their kernel of aggression. This would be impossible to explain in words—the meaning carried in the shape of a man’s arms—but it can be enacted, enhanced, and so, experienced.

In their observation of the men of Khirkee village, Raikhy’s ensemble discovered many such characteristics of what he calls “the particular body dynamic” inhabited by Indian men—the “pelvis dropping forward”, the expanded ribcage, the hands constantly touching things: other hands, themselves. “There’s something really sensual about those bodies,” Raikhy says, contrasting them with the more “trained bodies” you’d likely encounter just across the street at the Saket malls.

“Gender is a playing out of these characteristics, these physical details,” says Raikhy. Recombining these details, it follows, would be a reconstruction of gender. But Raikhy was careful not to construct a single new meaning, allowing himself to be led instead by specific inquiries such as, how does the body behave when the bedroom door is shut and what happens to it when someone enters the room? Answers to these questions were found through improvisation, and then rearranged conceptually.

This interplay between concept and improvisation is evident in the sequence that deals with what happens when someone enters the room. This too is a highly percussive sequence, beginning as one body being policed into self-conscious self-correction by another (with the aid of guttural shouts), and shifting gradually into a kind of rythmic physical groupthink, with all bodies snapping erect in tandem, no longer needing an auditory cue. There is a central conceptual concern embedded in Raikhy’s piece, though he scrupulously avoided talking to his dancers about it, knowing it would make its way into the piece naturally.

It comes through most potently in a duet between Raikhy and a male dancer, which begins with the two lying entangled downstage. It’s easy to imagine this sequence as the counterpoint to the one in which the ensemble springs repeatedly to attention—another aspect of the investigation of what bodies are like when no one’s looking.

Though he never uses the word, this sequence is an exploration of intimacy, of “masculinity as it plays out in contact with another body, [of] how the idea of touch can present many possibilities of being male”. This is where Raikhy’s central concern reveals itself: masculinity as an axis of fear and desire and the male body as the source of these forces, an object of attraction and repulsion—a magnet.

The entire piece unfolds along this axis—the push and pull between dancers, competition and intimacy, encouragement and encroachment, embarrassment and bravado, fear and desire, violence and play. In an interview with Blouin Artinfo a few weeks ago, Raikhy said he was interested in “the ideas of masculinity that reside in the real moment of contact between people”. Though he doesn’t elaborate on what ideas of masculinity he had aimed to articulate in the moments of contact in Antennae, the answers are already in the piece—embedded, embodied. I can’t tell you what masculinity is; perhaps neither can Raikhy. But there it is, enacting itself on the stage.