India Art Fair 2017: All the Flowers Are for Everyone 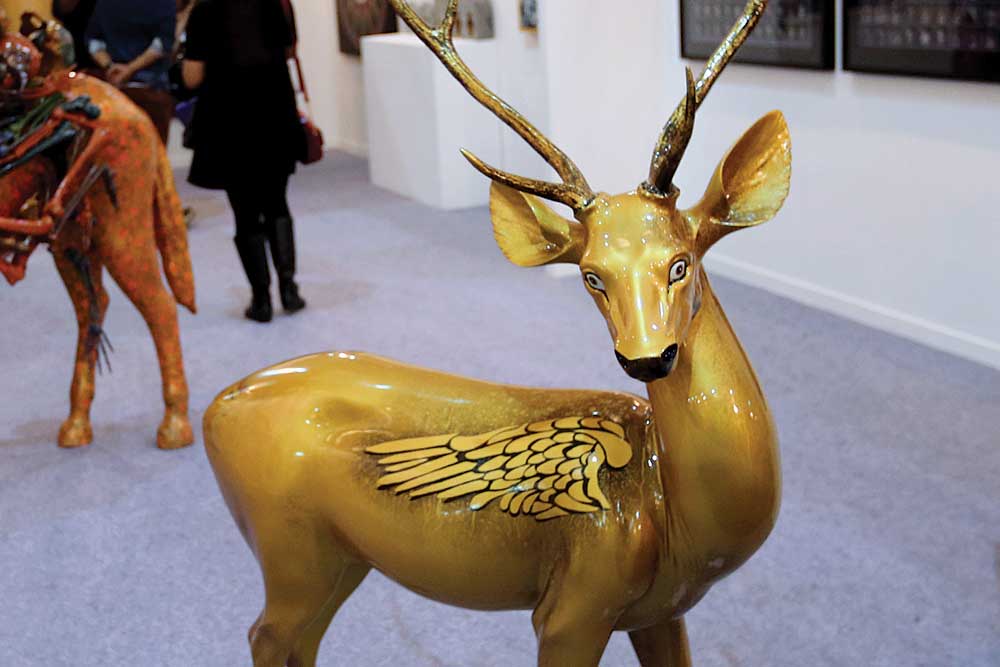 THE INDIA ART Fair (IAF) is usually a maze. Even with a map in hand and a purpose in mind, one can easily get lost or distracted. Often one meanders while trying to locate that elusive booth, which only leads to happy and unexpected discoveries. You might suddenly be caught unaware by a gem, while sipping tea. This happened to me at IAF, at the NSIC grounds, Delhi. A rare cubist work by Pablo Picasso suddenly swam into focus. It was Maya in a Sailor Suit, made in 1938. Showcased by Galeria Joan Gaspar, Spain, this work was perhaps the most underplayed gem of the IAF.

There were also etchings by Salvadore Dali, at Redsea Gallery, Singapore, which delightfully depicted the surrealist’s vivid imagination. In the work, trees and animals morph into each other, and female forms merge into violins and guitars. To see the original prints by these two masters, in the flesh, is quite different from seeing offset prints of the same, which are not touched by the artist’s hand and are just mechanical reproductions of the works.

With these gems on display, it is not surprising that the fair had over 90,000 visitors. Also despite demonetisation, etcetera, 80 per cent of galleries reported sales. With well-known galleries from 23 countries participating, the excitement could be a result of the founding director Neha Kirpal’s tie up with Marco Fazzone, managing director of design and regional art fairs, MCH Group. The MCH Group, which runs the prestigious Art Basel fairs—in Basel, Miami Beach and Hong Kong—now holds a majority stake at IAF. Sunaina Anand, the owner of Art Alive Gallery, says, “It was heartening to see people’s confidence in the art market returning after the demonetisation drive. We saw sales of works priced in the middle, but we hope to see big ticket works sell as well.”

Besides sales—always the priority of any art fair—several other events entertained the audience and generated awareness about art. At the VIP lounge, artist Sankha Samanta painted on site while percussion instruments boomed behind him. The performance was part of ‘The Hub’ and visitors gathered to experience a street fair atmosphere—with music, art and food. Samanta transformed a blank canvas into a sea of raging colours with tools like wooden bungs, palette knife and rollers. The result was an expressive abstract work that tapped into the rhythm of the drums.

Our South Asian neighbours once again participated at IAF. Britto Arts Trust, from Bangladesh, the Nepal Art Council, Kathmandu, and Theertha International Artists’ Collective from Colombo put up impressive stalls. No Man’s Land from Bangladesh examined the border politics between India and Bangladesh, through provocative films and photographs. We were also treated to Sri Lankan artist Pala Pothupitiya’s playful reconstructed maps that questioned the history of map making itself and the politics of borders.

Those wanting to study the Progressive Artists would have been satiated, as SH Raza’s Bindu series occupied an entire booth, while the art of FN Souza and MF Husain could also be admired at art lounges and booths. We also saw older works by artists like Subodh Gupta, whose Absolut bottle consisting of his signature steel utensils was on display. Sudarshan Shetty’s Taj Mahal, an interactive and immersive work, acquired by the Kiran Nadar Museum, created much intrigue. Shetty creates his own monument with more than 250 miniature metallic reproductions of the Taj, within which there is a fictive video sequence showing the central dome of the actual building, consumed by flames. Other highlights included Jitish Kallat’s work. It appears this edition of the IAF was dedicated to younger artists, whose works were priced in the affordable bracket and saw more takers than the works that were priced high. For instance, Israeli artist Yaacov Agam’s beautifully curated booth of optical and kinetic art did not notch up sales. While viewers were excited and appreciative of his artwork, they were priced in the exorbitant range of Rs 60 odd lakh.

Rasika Kajaria, the owner of Exhibit 320, a gallery in Delhi, attests that sales had been brisk: “Smaller and more compact this year, IAF drew interest from Indian and foreign collectors. Surprisingly, even demonetisation didn’t reduce the ardent passion of the collectors to purchase works they liked.” All of her artist Sumakshi Singh’s works at the booth were sold. The young artist displayed a collection of installations, which captured and solidified ephemeral beauty through embroidered floral forms that appeared to float in space and time.

Along with Kajaria, others like Chemould Prescott from Mumbai reported brisk sales of artworks, to the tune of 70 per cent of their collection. Their artists ranged from established names like Jitish Kallat, Dhruvi Acharya and NS Harsha to emerging artists like Aditi Singh, Bhuvanesh Gowda and Bijoy Jain.

NUMBERS ASIDE, THE QUALITY of art this time around pleased not only the collectors but those who came with a critical eye. “India Art Fair is evolving with grace, elegance and maturity. It’s now not just a platform to showcase great art. There is a strategic thematic strain running right through the fair,” says Suhel Seth, managing partner of Counselage India. He was impressed by the adjunct activity whether it’s the platform exhibits, the confluence of technology and art, or the manner in which people are being encouraged to participate. “It is participatory art democracy of the finest kind. You don’t see that in South Asia. What I loved is that the theme has been tightened to South Asia, because then you create a point of discrimination compared to the 250-odd art fairs that happen all over the world,” he adds.

On the second day of IAF, budding curators and art writers steered eager viewers around the fair explaining artworks to them, while artists like Vidisha Fadescha conducted surprise talks and interactions on the politics of art. Fadescha uses satire and performance to challenge stereotypes of gender and race, colonisation and history.

The films on art were well curated by Avijit Mukul Kishore and architect Rohan Shivkumar. Ashim Ahluwalia’s Events in a Cloud Chamber, a redux of painter Akbar Padamsee’s film of the same name that was destroyed 40 years ago, was a special treat. The short film showcases the modernist giant’s approach to art and his two attempts at avant-garde filmmaking. Payal Kapadia’s film Watermelon, Fish and Half Ghost—inspired by late painter Bhupen Khakhar’s folk tale, deals with lost love, and a family that resides in a chawl in Mumbai, a city of millions, where proximity fosters friendships—was also noteworthy. However, few people showed up for the screenings. One assumes this was because visitors were too busy viewing the over 800 artworks on display. Having concurrent events is a problem for festivals, as visitors are forced to choose certain events over others.

Another attraction was an interactive project, hosted by FICA arts, by the Delhi-based artists Thukral & Tagra which played with memory and colour. Titled Memoir Bar, it invited viewers to document a memory on a piece of paper, which was later shredded into an amalgam of forms. A team of young artists then embedded the shreds into a tile. The work is thus permeated with memory that endures time. The artists not only transformed their booth into an interactive space, but viewers were persuaded to ‘use memory as currency’.

The photography section was stimulating as well. Tasveer Gallery displayed photographs by Rohit Chawla, where the artist-photographer created poised portraits of people dressed to resemble characters from miniatures and Raja Ravi Varma paintings. Using a mis-en-scene of objects inspired by these paintings, Chawla creates an interesting dialogue between painting and photography. At PhotoInk, one enjoyed the works of photographers like Roger Ballen, Pablo Bartholomew and Prabuddha Dasgupta. A booth dedicated to the archival photographs of Kanu Gandhi captured a personal view of Mahatma Gandhi’s life.

The glory of IAF is that everyone can find a piece of work that speaks to them. For some it could have been Mithu Sen’s luminescent works, for others it could have been Anila Quayyum Agha’s All the Flowers are for Me, in front of which everyone wanted to take a photograph. The IAF once again proved that even in the frenzy of the world, art can still provide solace.