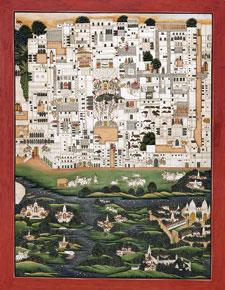 When you walk into the India Art Fair this year, Pichwai paintings, folk and tribal art will most likely jostle for your attention alongside contemporary art from Pakistan, Bangladesh, Nepal and Sri Lanka. Unlike last year, when critic- curator Girish Shahane’s art installation projects marked the fair, there appears to be a renewed focus on painting and sculpture—more conventional art forms. One will also spot the works of younger artists rather than established names. So, for every SH Raza, Jatin Das, Sujata Bajaj, Jayasri Burman and Anjolie Ela Menon, there will be a Ronny Sen, Sunoj D, Sachin George Sebastian and Pala Pothupitiye.

The eighth edition of India Art Fair (IAF), to be held from 28 to 31 January, will also have the usual works from Indian galleries like Mumbai’s Chemould Prescott, Kolkata’s Akar Prakar, Chennai’s Apparao and Delhi’s Gallery Espace. There will also be a film package curated by Shai Heredia, director of Experimenta, showcasing cutting-edge parallel cinema and video art from Asia and elsewhere. Films like Natasha Mendonca’s award-winning Jan Villa, Ayisha Abraham’s Of a Thousand Moons and Sohrab Hura’s Pati will be screened at IAF 2016.

Arguably, the art fair has gone through several transitions and has tried several combinations—it began with top-end white cube galleries from India, Europe and the United States; this time the attention has turned to the Asian region. “People come here to see art that is not accessible or visible at other ‘destination’ art fairs such as Art Dubai or Art Hong Kong, which is why we have taken this approach,” says IAF director Neha Kirpal.

While we may miss many international names like Damien Hirst, Marina Abramovic and Anish Kapoor who have been synonymous with IAF over the last seven years, the Asian ‘flavour’ is now a global trend.

“The South Asian art scene now has a global presence, one that speaks of the regional. India and its neighbours have a nascent art scene with a market that has more room to grow than, say, China,” says Zain Masud, the newly appointed international director of the fair. Whether it is the presence of an India-Pakistan pavilion at the Venice Biennale—featuring Shilpa Gupta and Rashid Rana—or the VS Gaitonde retrospective at the Guggenheim, Asia is certainly the flavour of the international art scene; which is why this year there will be a significant presence from galleries such Nepal Art Council, Theertha Artists Collective from Sri Lanka, Taseer Art Gallery from Pakistan and the Bengal Art Lounge from Bangladesh.

There will, however, be an absence of many of India’s white cube galleries like Gallery Maskara, Jhaveri Contemporary, Project 88, Latitude 28 and Art District XIII. Galleries like Gallery Maskara and Jhaveri Contemporary are focusing on the Dhaka Art Summit while others like Latitude 28 find Art Dubai a more rewarding experience. We saw a similar trend with some international names like White Cube and Hauser & Wirth that showed in 2013 but have now dropped out of IAF. Does this loss of revenue worry Kirpal?

“We have had continued support from galleries that have come back to the fair even though we launched during the economic slowdown in 2008. In our endeavour to focus on South Asia, we are not really focusing on the usual galleries,” says Kirpal.

One of the grouses of many of the serious galleries that decided not to show up this year was that no new buyers were coming to IAF, and with such hefty booth charges to be paid (about Rs 8 lakh), they wanted to sell more works of art. “I feel the focus is more on creating an art extravaganza with the food stalls and films. Who is going to pay attention to the art then?” asks a gallery owner, requesting anonymity.

On the other hand, someone like Tasneem Mehta, honorary director of the Bhau Daji Lad Museum in Mumbai, is keen to have a ‘free day’ for students. “Maybe one could lobby with the Delhi government to subsidise the cost of a free day for schoolchildren, college students and those studying art,” says Mehta, who has a presence at this year’s fair under the ‘Institutional’ section.

How does Kirpal feel about the constant refrain to have the art fair made into an educational experience for those keen on art literacy? Will it put more pressure on the galleries that hope to have brisk sales? “We have to be realistic that the primary aim of the fair is of a commercial nature and sales are important. In fact, we often get requests from galleries for extended business hours,” she says. Some galleries are often nervous about the distraction caused by unruly schoolchildren. Unlike the Comic Con, where, for Rs 300, one could visit for three days, and the most expensive item was only for Rs 8,000, the works at IAF are priced in a range from Rs 50,000 to several lakhs, some even going into crores. Most galleries are aiming for big-ticket buyers in their quest for higher sales. This often overshadows philanthropic endeavours.

“Something like the Kochi Biennale is a space dedicated to creating art education and awareness. They have a successful tie-up with the government and have also managed to rope in local participants,” says Philipp von Sahr, president of BMW India, partner of the Kochi Biennale in 2014 and also one at the IAF this year.

Next year, there will be a DLF public art pavilion and Kirpal is hoping for greater public participation. For now, she would rather focus on what to expect this year.