How a Courier Boy became Director of the United Art Fair

Is Anurag Sharma’s dream venture a ‘me too’ flash in the pan or does he mean business? 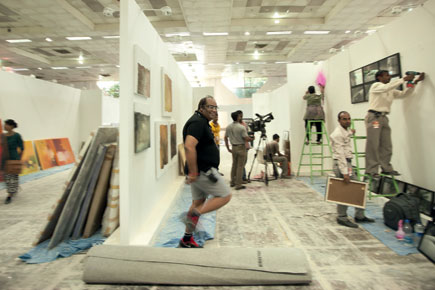 Is Anurag Sharma’s dream venture a ‘me too’ flash in the pan or does he mean business?


It’s two days before the United Art Fair opens at Pragati Maidan and artworks are still arriving in trucks, wrapped in curious packages. Curator Johny ML and his team soldier on unwrapping and organising artworks by names that are barely recognisable to even a regular gallery hopper or for that matter a member of the culturati.

One canvas showcases a tree growing out of an egg, while another has Rajasthani women walking with pots in a desert (really!?). If that didn’t do it for you, there is also the cheesy, kitschy, larger-than-life soft sculpture of a faux-tiger skin, Tarzan briefs festooned with fake plastic fruit and faux diamantes commenting on the alpha male—critique or praise? We are not very clear.

There are also several works that have a startling resemblance to FN Souza’s, and Bharti Kher’s Bindis are referenced in a work done in sequins.

There are 600 of these artworks to go through and the mind teeters at the prospect, given that what we have seen so far clearly isn’t path breaking.

“The fair is geared mainly to give a platform to artists who lack visibility. We think of them as emerging artists even if they are 50 plus,” says Johny ML, who claims that the gallery system is “promoting only one kind of art, a certain kind of aesthetics and there is no platform for critical dialogue”.  Interestingly, Radhakrishna, who is part of the show, is also a jury member.

In all this, one wonders, where is Anurag Sharma? Having popped two pain killers, the man is catching up on his sleep after “three sleepless nights”, we are told. At 6 pm he shows up in jeans and a white shirt, doing what he knows best—instructing the offloading of R Radhakrishna’s artwork.

For those who didn’t know,  Sharma began his career in Blue Dart as a courier boy in 1992. “On my first day at the job I started my rounds at 6 am and by 10.30 am I had delivered 120 packages… I was just 18 years old then and within my five years at Blue Dart I had gotten six promotions,” says Sharma.

“I was assigned the media section where I did my rounds of The Times of India, Hindustan Times, KG Marg and Darya Ganj. I worked hard and built my contacts,” says Sharma in a matter-of-fact way. “I worked for Blue Dart, FedEx and then moved to a rival company National Cargo because they offered me twice the salary; Rs 35,000  in 1999 was a lot of money,” says Sharma of his move to Ludhiana.

But bad days were ahead, once National Cargo went bankrupt in 2000. “My wife and I were expecting a baby and it was only prayers to Bajrangbali that pulled us through. I got a Rs 2 lakh consignment from Bodhi Art Gallery to take on their art shipment and that started the ball rolling,” says Sharma. “In 2001 I launched my own company UAPL. I began handling art for big galleries and art fairs,” says Sharma, who has clearly studied Neha Kripal’s India Art Fair—because everything from his website to the sculpture park feels familiar.

“Yes, we live in an age of replicas where even the India Art Fair is modelled on Art Basel and the Hong Kong Art Fair. However, the United Art Fair is a unique artist-driven venture… We have not even charged them for the shipping and there are no galleries acting as middlemen,” says Sharma.

Sounds ideal, but how does he plan to sustain this module? Clearly, it cannot subsist on sales of artworks priced mostly between Rs 20,000 and Rs 1 lakh in a weak economy. “We will get more sponsorship. I have put my life savings into this venture… However if Mark Zuckerberg sat around wondering whether or not to make social networking sites free at a time when MSN was charging $500 for social networks, then we would not have had a revolution like Facebook,” says Sharma. Currently, the UAF is supported by India’s  Ministry of Culture, Pro Helvetia, Indo-American Arts Council, Embassy of Spain and Lalit Kala Akademi.

On probing deeper, though, Johny ML, head curator of the venture, reveals, “Initially we wanted to rope in galleries and have a regular art fair, but the galleries wanted only a certain type of artist showing their work and so we could not source the untapped talent that exists in small towns and villages…When we approached these artists, some of them could not even afford the stalls,” says Johny ML, “That is when we decided to make it free.”

Dubbed the ‘poor man’s art fair’ by many, the UAF has attracted its share of criticism. However both Sharma and Johny remain stoic.

“Of course there will be teething problems and there will be criticism because most people are afraid of change. But we have a five-year plan to establish ourselves. I have a family of around 600 clients and I intend to plug into my professional [contacts] as an art moving firm,” says Sharma.

With a four-city tour planned for the UAF and intentions to invite participation from Africa, Latin America and Southeast Asia, Sharma has his work cut out for him.

Creating another first, the fair ended with an auction where a work titled Joyriders (a car in fibre glass that clearly referenced Subodh Gupta’s white Ambassador) by Neeraj Rajwal sold for Rs 12 lakh, while Loot by Manish Sharma sold for 13.5 lakh. The other two works did not find any takers.

It seems the need to make some quick money led Sharma to hold this last-minute auction. When we contacted him later for comments, the man was, well, in the midst of another one of those ‘well deserved’ naps.