The National Centre for the Performing Arts in Mumbai has begun screening recordings of inaccessible international performances of opera and ballet, using technology to give a lift to the city’s cultural calendar 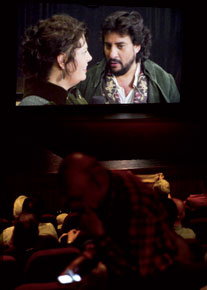 
The mood is one of irony. On a Tuesday evening, all set to watch one of the grandest cultural performances in the world—the Opera—enthusiasts flock to the Godrej Dance Theatre at the NCPA in kurtas and chappals, a few in shorts and football jerseys. No elaborate foyer, no luxurious silk gowns, no towering hairdos and no feather boas in sight. Huddled in the corner, chatting over simple cold coffee and chutney sandwiches, the small but discerning crowd is getting ready to watch the four-part Italian opera Il Trovatore by Giuseppe Verdi, right here in Mumbai. It’s a fuss-free version of the real thing: a screening of a video recording of the opera, which premiered at the Metropolitan Opera House in New York during the 2008-09 season. These opera screenings are taking place in Mumbai through The Met: Live in HD, an award-winning series of live high-definition transmissions to venues across 60 countries. This initiative is giving cultural aficionados in Mumbai an opportunity to be part of a global performance experience for the affordable price of Rs 500.

“The last couple of years, I haven’t been to the Met in New York, and sometimes tickets are difficult to get hold of, so this is a great opportunity to watch some of the latest opera offerings of the season,” says Gulshirin Dubash, 38, an acting teacher and classical music enthusiast who lives in Michigan and visits Mumbai every summer. She has already seen Carmen and Il Trovatore this month and is looking forward to catching a few more before she leaves.

Even for first-time opera patrons like Corinna Schmidt, 29, a German national living in India for the past two years, the screening of Aida was enjoyable. “All the good opera houses were at least two hours away from where I lived in southern Germany. I was always intrigued by the opera but never watched one. These screenings are a great way to promote Western classical performances in the city,” she says.

This is not the first time the NCPA has got such an enthusiastic response to film screenings of international events. Its earliest partnership began with the UK’s National Theatre to show live transmissions of plays through a series called NT Live, which commenced in June 2011 with the premiere of Danny Boyle’s Frankenstein. Theatre director Rahul da Cunha, who travels to London every September to watch theatre, was one of the many discerning theatregoers present at this screening. “Along with Frankenstein I have also watched The Collaborators through the NT Live initiative. The films are fantastic, made especially for screenings, hence well-produced with great sound. Even though it may not replace the real thing, you get to see some great international work up close and personal,” he says, joking, “Sometimes even at the best auditoriums in the world, you could find yourself in a seat with someone’s head in the way.”

While it is true that watching a film of something we are accustomed to watching live, such as a play, can be slightly disorienting, theatre lovers find themselves engrossed in no time. Nevil Timbadia, 29, a restaurateur and co-founder of a comedy and theatre production and booking agency, watched One Man, Two Guvnors a few months ago, and says the series is “a great way to witness the scale of international productions and the elaborate sets involved; it becomes a good benchmark and can encourage us to [undertake] bigger productions.”

The first NT Live initiative was undertaken right after NCPA chairman Khushroo N Santook visited London in 2010 and watched screenings of a few ballet shows and plays beamed into cinema halls. But before seeking permissions for even the first screening, the NCPA had to upgrade its sound and projector systems so it could provide a top-notch multi-sensory experience. This, after all, was alternate cinema. It demanded as much. These technological advancements have been made at the 150-seater Godrej Dance Theatre, its dedicated auditorium for all screenings, which has been running shows for packed audiences composed of elderly opera buffs, first-timers, art students, theatre personalities and young patrons from assorted walks of life in search of a sophisticated cultural experience from overseas.

“We knew the NT Live screenings would be well-received, but we did not anticipate full houses for the opera and ballet shows. On demand, we have added repeat shows to the calendar,” says Deepa Gahlot, head of programming for theatre and film at NCPA.

After introducing Mumbai’s audiences to NT Live and The Met: Live in HD, the NCPA decided to launch screenings of ballet shows staged by one of the oldest ballet companies in the world, the Bolshoi Ballet of Moscow. This series opened in April this year with Tchaikovsky’s Swan Lake, followed by other romantic classics such as Esmeralda, La Bayadere, La Sylphide and Romeo and Juliet.

In the same month, the NCPA also added another category to its screenings roster with the Exhibition series, films that showcase the best art exhibitions of the world, starting with Manet: Portraying Life, an exhibition at the UK’s Royal Academy of Art.

Now, with a total of four offerings—theatre, opera, ballet and art—the NCPA is covering a wide gamut of international shows that would otherwise be impossible for regular city patrons to watch over an entire lifetime.

A recent film, Munch 150, screened as part of the Exhibition series, is a good example of how elusive some art shows can be. The film is based on a special exhibit celebrating the 150th birth anniversary of renowned Norwegian artist Edvard Munch, best known for his painting, The Scream. The exhibition is currently running in Oslo at two venues—the Munch Museum and the National Museum of Art, Architecture and Design—and is regarded as one of the most comprehensive presentations of Munch’s art and its significance.

The film Munch 150 captures this journey through elaborate detail, a systematic survey of his work, interviews with critics and curators, and a thorough analysis of his personality and the way a few life events impacted his style.

“It is unlikely that you will be in the same city at the time it is curating a special solo exhibition like this one. I travel overseas every year and visit many art galleries, but till now, I have only seen one solo exhibit up close, that of Andy Warhol in Hong Kong. So, these screenings are a great opportunity to learn so much about just one artist,” says Shagun Doshi, 28, a graphic designer and art lover.

With a duration of 100 minutes—less than two hours—the film left some art lovers at the screening longing for more, but was otherwise found rivetting and informative.

Mumbai Art Circle, a group of art enthusiasts that began on Meetup.com, a website for such huddles, centred its recent meeting around the Munch screening. Sumit Sabnis, 40, an art lover and pilot who heads the Circle and visits many art galleries while travelling abroad on work, says, “This was the first time I watched a film on an art exhibition. Sitting here, you could watch something that was running in Norway, [and that] is absolutely fantastic. We will definitely plan more events around these screenings, now that I have discovered them.”