The ugly truth behind the Beautiful People of the fashion world, and creating the Braille collection 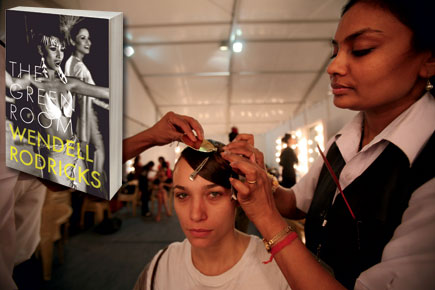 The ugly truth behind the Beautiful People of the fashion world, and creating the Braille collection

Professor Acharya from the Worli Institute for the Blind in Mumbai approached Meher Castelino to do a designer collection based on Braille. He was uncertain what the collection would be. Meher suggested I meet him. I went to the suburbs near Jogeshwari and met the blind teacher at the railway station. I watched, fascinated, as he negotiated the streets with his cane and led me to a modest home. In the cool, dark room, he served lemonade and biscuits, expertly navigating the rows of gleaming stainless steel utensils, the racks in the refrigerator and delving into neat cupboards to remove glasses and plates.

“Professor Acharya, what do you have in mind for this collection?”

“I don’t have a clear idea. But maybe you could make a collection of T-shirts with the Braille alphabet in bright colours so that people can read the Braille lettering.”

“But how does that help you? It is people with sight who will appreciate the colours.”

“What do you suggest?” he asked.

I was uncertain. I changed tracks and asked him about clothes.

“I had my vision when I was young. So I know colours. But it is a torture to dress each morning. I know I want to wear a blue shirt with grey pants. I need to ask for help from those with sight. Within minutes, a neat stack of shirts becomes a mess. The same goes for the trousers. It is a constant repetition of the question of whether the pants are grey or not. The same frustration with socks. It can take me half an hour or more to dress. Something you people take for granted. You get confidence with the act of dressing up; we get frustrated.”

This was terrible. I vowed to do something to ease act of dressing.

In Goa, I approached a charitable organisation, Caritas, and got a page of Braille with the alphabets written in Roman script near each letter.

In college, I had learnt how colours affect emotion. Red excites, yellow induces happiness, green calmness and blue peace and serenity. I purchased colours in the brightest intensity and put them on the visually challenged. There was no reaction. To feel an emotion via colour, one needs to see the colour.

After many months, I had a brainwave. Maybe we should put Braille on clothing so that the blind can read the colour. We reproduced the Braille letters on cloth in fine French knots. On another swatch, we ‘wrote’ Braille in tiny pearls.

When I sent them to Professor Acharya, he could not read them.

“Have you taken a photocopy of the Braille letters, Wendell?” he asked.

“No. We marked them on a piece of paper, corresponding with the six positions of each letter.”

“It is not going to work like that. You can see the letter ‘a’ as small as a pin or as tall as a building. But for us the letter ‘a’ must fit in a space in the exact Braille size so that we can feel it with the ball of the fingertip.”

A few experiments later, I got an excited call from the professor. “Wendell, I can read the fabric!’

“What did I write on the cloth? Read it out for me,” I teased.

I was delirious with joy. So many years after Helen Keller, no one had ever thought of putting Braille on cloth.

The visually challenged could now read their clothes. Professor Acharya could get dressed on his own. We numbered the buttons and buttonholes for perfect buttoning. Braille letters went on socks, ties and even underwear.

The Visionnaire collection opened at Ensemble in Mumbai on 10 April 2001. There was a huge media turnout. Yakuta, a dynamic young girl, handled the PR for the collection. Ensemble used her for all their events from then on. The Visionnaire story made it to the international press. Television stations in Paris and radio stations in New York called about the collection and showered compliments on the clothes. I received a letter from a visually challenged fashion model in Europe; she later cried on the telephone: “You have no idea what you have done for us. God bless you.”

I was humbled by the praise that came my way because of Visionnaire.

Fashion can be exhilarating, but it has made me a cynic. When I go to the movies now, I laugh at moments when the entire audience is weeping. When everyone is going ‘Isn’t she beautiful…’ my comment is ‘Too much false lash’. I have tried to get through Hindi movies without getting ‘behind the scenes’, but it does not happen any longer. Too many years of seeing how films are made. I can appreciate good lighting, great effects, sublime make-up, well-designed costumes. What I cannot react to is the emotion—I know that they are acting, that it is all fake.

The truths that the public never knows, that is what keeps me from engaging with what appears on screen. So much is worked on. The porcelain teeth, the collagen lips, the hair extensions. Recently, a unit was shooting at home in Colvale. The model is a present-day screen heart-throb and a pin-up girl with legions of male fans. What those poor legions do not know is that the body they see is not the body that nature gave her. I listened with the other members of the make-up and hair team as the young 20-something described her breast enhancement surgery. “Isn’t she a bit too young for this stuff ?” I asked. A stupid question when one knows the hefty pay-offs that are part and parcel of the glamour business. “Oh, in Brazil, they do it younger,” she sweetly chimed. She then revealed how her surgeon had given her a video tape of the entire surgery. “Why?” I asked. “In case I want to get some more work done, I have a record of exactly where the insert was made.” I was dumbfounded.

I should not be. So much of what one sees on ramp, screen and television is not real. It is a world of serious make-believe. Seen those ads where a waterfall of gleaming black hair bounces radiantly in slow motion? Can one ever get hair like that with that shampoo? Never! The truth is that the model does have good hair. But that hair is treated for a week before the shoot. It is dyed a special blue-black. They put in rootlift foam so that the hair looks voluminous. Intense lighting from every angle ensures an unreal gleam. “Don’t tell me this stuff. I want to believe that it is all true,” a columnist told me recently at a photography workshop with Denzil Sequeira at the Goa Marriott Resort.

What is also hidden from the public eye is the touching up that is done after a great photo is shot. One would imagine that the company selling cosmetics would show the real thing, but no. Consider the average fairness cream ad. Many weeks and months go into planning the visual. A model is selected after many test shots. Normally, the average age of these girls is 18. At that age, good skin is radiant anyway. On the day of the shoot, they slather on make-up for a minimum of two hours. The ‘latest technology’ make-up is used here. The creamiest lip colours, flawless foundations, light-reflective powders, masking lotions and creams that do amazing things when ‘lit’ correctly for the camera are employed. Hair takes another hour.

The result is overwhelming. When a make-up expert like Mickey Contractor is at hand, even a girl’s mother will not recognise her own daughter once she has been made over. The wardrobe and photographer take over next. About five hours and as many as 20 rolls of film later, the unit packs up. When the image is developed a day later, a team of ten choose a single shot from the hundreds. That image is then digitally enhanced. Under-eye bags, laughter lines, chubby cheeks, stray eyebrows and natural colours are altered beyond belief.

I know models who are intimidated by their own ‘beauty’ when the ad is released. They know that the image has been worked on so much that it is an unreal person out there. Thighs are thinned down, belly bumps are carved away, silhouettes are elongated to create an illusion of slimness… The list is endless.

And all of this is done on very beautiful girls with superb bodies. What about us lesser mortals?