How the brothers Ayaz and Zameer Basrai are creating radical designs for restaurants, pubs and cafés in India’s biggest cities 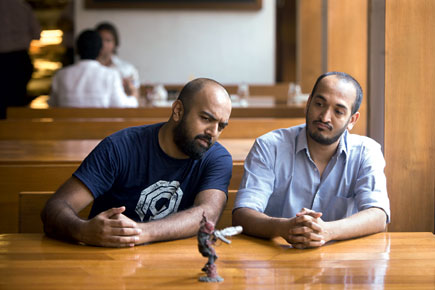 How the brothers Ayaz and Zameer Basrai are creating radical designs for restaurants, pubs and cafés in India’s biggest cities


“I hope they don’t tell us about some pipe leaking or paint peeling,” laughs Zameer Basrai at Bandra’s Salt Water Café. “That’s why we don’t come back to the places we have designed.” Sitting beside him is his elder brother Ayaz, three years older at 33. Together, they are one of the most in-demand designers for Mumbai and Delhi’s restaurants, cafes and pubs. The Salt Water Café is one of their early hospitality projects. Its all-white-and-wood interiors had a remarkable impression on diners back in 2009 when it opened.

They are sipping on a Virgin Mojito and a fresh juice, comfortably oscillating between saying something intelligent, things that they surprise even themselves with, and things that are funny and irreverent. Zameer often nudges Ayaz to make sure he doesn’t say the ‘wrong’ thing. The overriding impression is of two people
who have a good time with their work, who live and breathe design and do serious things with a non-serious approach. And that’s basically what their firm The Busride Design Studio has been associated with since it opened in 2006 in Mumbai: eccentricity and whimsicality.

Just as Salt Water Café was an exercise in something new, in the last three or four years, Ayaz, an industrial designer from National Institute of Design, Ahmedabad, and Zameer, an architect from Massachusetts Institute of Technology, have together concocted some of the most alternative interior design solutions for many hospitality spaces in Mumbai and Delhi. This includes Mumbai’s Café Zoe, Elbo Room and Mocha in Andheri. In Delhi, they have done Trishna, Smoke House Room, Mocha Arthouse, Shroom  and Smoke House Grill.

Now, past the stage of establishing credibility, the brothers are enjoying the best time of their careers—open briefs, no briefs and a diverse variety of projects.
“The customer today has become very hybrid—he doesn’t know what he wants to do when, if he wants to eat breakfast at night or get shit-faced in the afternoon. Hence, a lot of hybrid restaurants are coming up, and luckily they are approaching us with blank slates,” says Ayaz. This new hybrid restaurant—a bar-cum-deli-cum-café-cum-breakfast—is also a chef-centric place, “where the chef is the DJ”.

Grappling simultaneously with 27 projects of different scales and mediums, Ayaz and Zameer have a team of five “really hard-working people” and lots of organised chaos. “We used to pull a lot of late-nighters, but now we work 10-7; Zameer and I just got married recently,” says Ayaz. “Next year we will cut back to five-day work-weeks.”

These 27 projects include a new diner in Versova, Mumbai (which will see a Gaudi-inspired rooftop), a new bar by first-time restaurateurs in Bandra, Smoke House Deli in Bangalore, two manufacturing units and innovation centres in Andheri East, the Unbox Design Festival in Delhi coming up in February 2013, a 17-minute animation sequence on VH1’s Liquid TV and a few residential spaces in Mumbai and Delhi. Even the past year has seen The Busride involved in very interesting work such as open-brief installations for Lakmé Fashion Week, the CMYK pop-up bookstore in Good Earth, Mumbai, and production design for the new fiction show on MTV, Eristoff Bring On The Night, where several junk items are used to create props and sets.

“This mixed bag of projects is what is fun for us also. You can mix many different techniques, languages, skills to come up with something. The quick projects also become incubators for experimentation,” says Ayaz.

“Ya, Ayaz freaks out on production design projects. He goes crazy and pounces on them like a dog,” says Zameer. (Both make growling dog sounds at this point).
While Smoke House Room and Shroom in Delhi are bathed in what they call ‘organic fluidity’, hallucinatory psychedelia in form and design, Café Zoe in Mumbai has a bare-it-all, stripped-down feel, exposing a very global-cool, nonchalant vast space for breakfast, dinner and drinks. So, clearly they don’t have a signature style of work (“And thank God for that,” they say), but what they say they do have is a signature approach.

“We like to understand the business mandate behind each project; what kind of a space it is, is it a day-time space, a night-time space, what kind of food will they serve, will the owners be present at the venue? And we spend a lot of time understanding the skill sets of the owners—so that we can tailor-make a design very specific to their needs,” explains Zameer. Ayaz adds: “For instance, Zoe’s design works because Jeremie and Tarini (its owners) are present at the restaurant, but at Smoke House Deli, on the other hand, the design has to do a lot more to communicate that warmth and personal touch.”

The brithers, over time, have involved themselves in many more elements of the space than just the design—everything related to the ‘vibe’ of the place. Holistic design or a 360-degree approach to everything is what they bring to the table, by contributing to the playlist, plating and even the valet key token that is handed out to the customer. “If we look at ourselves as glorified carpenters, then we will give solutions in wood, but if we look at ourselves as people who are shaping the culture of a city by understanding the grammar of the going out experience and by creating places where people meet to have conversations, to meet new people, only then are you able to add meaningful additions to a place,” says Ayaz.

Smoke House Room and Shroom in Delhi, which play intelligent dance music, cerebral music, are fine examples of the end-to-end experience and holistic design approach in question. “We realised one thing that when you step out of a club and into a harshly lit lobby, it’s a big downer. So on club nights at Shroom, we made sure blue acrylic discs are slipped into the light of the lift and lobby.That way, you are still ‘in the zone’,” explains Ayaz. For Smoke House Room, though an extremely futuristic, fluid and trippy décor has been deployed, it was all maintained in stark white. “The emphasis was entirely on the food. We worked very closely with the chef, Gresham Fernandes, to offer interesting concepts to include in the plating experience—such as presenting the butter laser-cut and on a pebble, or using forceps and tweezers to eat with,” says Ayaz. Fernandes, who is known for his mind-boggling technical innovations in food, has created dishes in deep, saturated colours, and therefore the white decor was specially fabricated to serve as an appropriate backdrop to the food.

Besides collaborations, a lot of other work they engage in post 7 pm often informs their studio work. Zameer loves to read and Ayaz loves to draw; being brothers, they are always talking about things they have seen, read and done, and somewhere along the way it sparks off a new idea for their work. “For all projects, the idea is everything, not the aesthetic. So we don’t like creating spaces using reference images from Google. We think of ideas, and then apply any aesthetic—colour, material, form—to achieve that idea,” says Zameer.

They don’t plan to turn the studio into a multi-office firm with 150 employees working for them; Ayaz and Zameer want The Busride to remain a boutique. Their barometer for success is strictly whether their work has had an impact on the city.

The brothers, who have always lived in and loved Bandra, and spent a lot of time and effort in the conservation of its Ranwar Village, are now working on a greater pedestrianisation and conservation plan for Bandra, not just its villages. They are in the midst of a self-auditing exercise to make their plan a watertight one before they begin. Says Zameer: “There will be something soon to share with the public. This is the time when our hands-on experience of working our way from the bottom up—on a nursery school to film set props to restaurants and commercial spaces—will come handy. We will finally get a chance to directly impact the urban environment.”