With two films set for release, Nikhil Advani returns to his favourite genre of romantic comedy 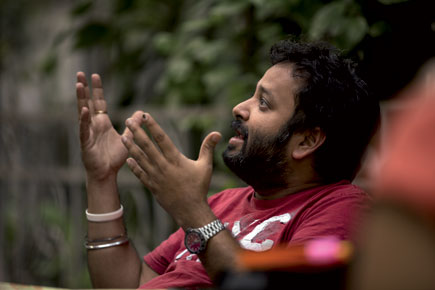 For two years after the success of his spy action thriller D-Day, Nikhil Advani was missing from the Bollywood scene. Suddenly, this September, we will see more of his work than we have in quite a while, with two back-to-back releases. Seated in his Khar office, the filmmaker is in a jovial mood. “When I made flop films, I made them one after another. After a successful film, I took a break—perhaps to digest the success that came after so long,” he says with an easy laugh. First off the block will be Hero, which marks the debut of star kids Sooraj Pancholi and Athiya Shetty, and after that would be Katti Batti, which features the romantic comedy hero Imran Khan after a long time and the reigning queen of Bollywood, Kangana Ranaut.

Advani seems relaxed as he lounges on his couch. The office is rather interestingly done up. The office walls are covered by the obligatory posters of his favourite films and those directed by him. His own cabin, however, offers a peek of what he likes to have around. Apart from his family pictures, its walls are adorned with posters made by the American illustrator Shepard Fairey. Before he sits down for the conversation, Advani speaks of how he collected these posters from New York and how Fairey has gained a huge following over the years. Unlike many other Bollywood insiders, Advani likes to keep up with the wider world.

Advani is currently sailing on two boats, both as director, but the expectations, he says, are different from both films. After D-Day, the director’s natural inclination was towards the romcom Katti Batti, a genre he hasn’t tried since his 2003 debut vehicle Kal Ho Naa Ho (KHNH), which remains one of Bollywood’s best loved romantic comedies. However, in the midst of its pre- production, Salman Khan came to him with an offer to remake Subhash Ghai’s epic film, Hero. Advani, who cannot say ‘no’ to Salman, gave his nod. The film’s trailers bear a slightly jaded look, though. Advani is undeterred. “With this film, all I wanted was to give Sooraj and Athiya the best possible launch I could.” He reveals that Salman has left no stone unturned to that end. “Salman has a very special connection with Sooraj. Even Sooraj doesn’t know what it is, but there is something.” Advani also says that after a point they stopped keeping track of the money that was spent on the movie. “Salman just told us to spend as much as we want but to make sure that the film lives up to expectations. After all, the money spent on the film is equivalent to the one-day collections of any of Salman’s films.”

However, the director’s focus is on Katti Batti. Not only is he excited about returning to the genre of his debut a dozen years ago, this is a story he considers close to his heart. He has woven instances of his own life in the film. “The character of Imran is mainly based on how I would react to situations or I may have in the past.” Advani insisted on having Imran Khan in it. “The production house [UTV] was a little iffy because of Imran’s current track record. But I asked them if they would have said ‘no’ if Imran had hits in his kitty. The producers said they would sanction a lower budget then. I was okay with that,” he says, who took the script to Kangana after signing Imran on.

As a director, Advani had a dream launch with a high-profile and widely- lauded film starring Shah Rukh Khan, but it soon became a cause of distress. Some time after the success of KHNH, Karan Johar—the film’s producer who wrote the story and screenplay—was the one who was remembered for its success, depriving Advani of the credit as its director. In hindsight, he now feels there were many who took advantage of the confusion. “There were too many people who were feeding us both things about each other. And I think by virtue of being young and inexperienced, we also had huge egos back then.” Advani and Johar knew each other from their school days. There was a point when Advani was so close to Karan’s father Yash Johar, that he was the first person he spoke to in the morning and the last person he spoke to at night. Advani was vested with the power of handling the Johar family production house, Dharma Productions. Back then, he would sign every expense voucher and manage its interface with the outside world while assisting Karan Johar. All this turned sour after KHNH. He regrets that they did not talk it out with each other at the time, which would have been the most sensible thing to do.

After Advani’s exit from Dharma, he was left confused about what his next move should be. It was rather ironical that he had helmed one of the biggest hits of Bollywood, but had no clue how to capitalise on it. This made him do films for all the wrong reasons, he admits. His second outing, Salaam- e-Ishq (2007), was more or less based on Love Actually, a British film with Hugh Grant and multiple story lines. “The reason I made this film is because I wanted to prove I could tackle everything. So I had every possible genre and emotion in the film to prove to the world that I was capable of handling it.” After this film flopped, Advani made Chandni Chowk to China (2009) because he thought he was getting to work with a big star—Akshay Kumar—despite his second film not having done well at the box office. This action flick was not only a flop, it was also derided by critics. Insecurities started creeping in soon after. There were times, Advani says, when he did not want to wake up and get out of bed since that would mean having to deal with reality. He next made the middling sports drama, Patiala House (2011), again with Akshay Kumar, but this too failed to draw audiences.

Advani is frank about his failures and memories of those days. But perhaps it was his lack of post-KHNH success that eventually let him back to what he needed most. One day, he recounts, he broke down in front of his wife, asking himself what he was doing with his life. Financially, he was secure, but failure had ground him down. He had the choice of going back to Dharma, but he chose not to take any favours and decided to lean on good old hard work.

While he was busy with Chandni Chowk and Patiala House, he was also helming an animation film called Delhi Safari as a side project. In retrospect, he feels it was best that he did not interfere much with the film and just let it happen. “It took eight years to complete and I had given it a step-motherly treatment because I was busy with my other projects. But it was good because I was not there to corrupt it, and in fact it turned out to be a good film,” he smiles. The film went on win a National Award and reinstate his faith in himself as a director.

When Advani went into D-Day, he had two things going for him: no recent Bollywood success to speak of and one independent film that had worked without much involvement on his part. “I went on to make D-Day with the sole intention of just making a film. I had gotten into this profession for a reason, and that reason was what had eluded me when I made my previous films,” he says. Once D-Day, a taut spy thriller with a sterling performance by Rishi Kapoor, released to a good reception, critics and audiences started revising the esteem in which they held Advani as a filmmaker.

“And finally I also got credit for making Kal Ho Naa Ho,” he says. “Life had indeed come full circle for me. For years, I tried to gain recognition, but eventually I got it when I made a film for the right reasons,” he says, a satisfied smile on his face.

Growing up, Advani did not have a film lineage to boast of. His father was the managing director of Sandoz, a pharmaceuticals firm, and his mother ran an advertising agency. He grew up in South Mumbai and studied chemistry at St Xavier’s College. His next step was to go abroad and study engineering. However, like others of his generation, he would routinely rent video cassettes and watch films. But it was only after he met Suparna, his wife now, that his interest in cinema deepened. “She was a film student and a Bengali who introduced me to Satyajit Ray films. I watched all of them.”

Advani recalls a percussionist show at Rang Bhavan, next to Xavier’s, while he was at college. It was Ustad Allah Rakha’s 75th birthday. “Suparna and I had bought tickets for it. I told her to reach there while I took a train to meet Saeed Mirza. I went and met him and told him that I wanted to be his assistant on Naya Nukkad.” That’s how Advani started assisting Mirza, and it is here that he met Sudhir Mishra, Kundan Shah and Renu Saluja, who became his film teachers. “This show was like my film school,” he says. After that, he asked his mother if she could introduce him to Ram Madhwani so he could assist him on ad films. “When I went to meet Ram, he gave me a list of films by Hitchcock, Bergman, Kurosawa and asked me if I had watched them. I hadn’t, so he asked me to go back and watch them. I watched all the films and then went back to him and asked him, ‘Now that I have seen all these films, why should I assist you?’” Advani went on to work with Yash Raj Films and Dharma.

A little known fact about Advani is that he turned the role of assistant directors into one of significance. He had their salaries increased and the upped the respect they got in the industry. Today, Advani has his own production house, Emmay Entertainment, and he hopes to give his assistants a chance to direct their own films. He knows he has the power of calling up actors and proposing a script. His impulsive days are far behind him, but he believes there is a long way to go before he achieves the cult status every filmmaker dreams of.