The story of a troupe of dance refugees from war-torn Iraq, one of whom performs with a bullet inside him 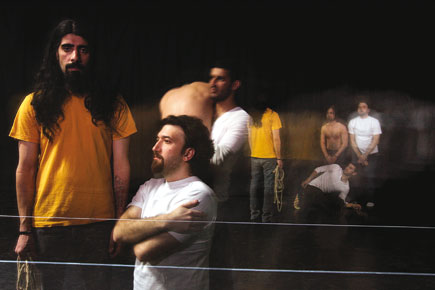 The story of a troupe of dance refugees from war-torn Iraq, one of whom performs with a bullet inside him


In 2003, when the United States-led coalition attacked Iraq, the war had an unlikely collateral fallout, one that went unreported—it killed whatever hope there was of creating a contemporary dance scene in Iraq. In any case, life under Saddam Hussain’s rule had denied Iraqis exposure to what was happening in the dance world. His ouster, instead of changing it, made it even worse. Sectarian violence after the invasion denied Iraqi dancers the space for self-expression, or even survival, in Iraq. Some turned refugees.

Under Saddam’s regime, the interaction local Iraqis had with the outside world was limited to state-run television, which only showed Egyptian dramas and old Hindi films. Without satellite TV, mobile phones and the internet, even Michael Jackson was considered ‘alternative’; almost no one knew about MJ or his moonwalk. Among those who did were a group of students from the Baghdad College of Fine Arts. When an Iraqi dancer based in Sweden returned to the college to teach jazz, Afro and other contemporary dance forms, the experience led to the students forming their own dance troupe. It was named Marduk, after an ancient Mesopotamian god. The troupe did well and even travelled abroad to attend festivals in South Korea, Egypt and so on. But wherever they went, Marduk was considered odd. Their performance was different; their dance bordered on the verge of physical theatre, and there was a reason for it. Without a dance scene to nurture them, the troupe had to fall back on their training in theatre, which was still taught at their university. Not only was their style considered odd, so was their nationality. “When we told people where we came from, they’d say, ‘Wow! You’re from Iraq. Ah, okay. Okay’,” says Anmar Taha, who’s been part of the troupe since its inception nine years ago.

Before the invasion, Marduk performed pieces like Fire in the Sky, about Adam and Eve, and was working on an interpretation of Othello. During the invasion, they performed the Shakespearean tragedy in Baghdad, though theatre had disappeared by then. “We lost our audience,” says Anmar, and the troupe was reduced to performing in smaller spaces for like-minded artistes and supporters. In their version of Othello, only three characters existed—Othello, Desdemona and Iago. The last of these was played by five to seven different artistes, to represent different shades of evil. During the invasion, two of the artists who played Iago were killed. And so was another member of the troupe. “They weren’t casualties of a bombing. They were singled out and killed, they were assassinated,” Anmar tries to explain in English, a language he just learnt two years ago.

In 2007, Anmar was shot at too. The bullet is still lodged in his stomach. It is 20 cm inside, somewhere near his kidney, and all doctors have advised him not to have it extracted. Anmar was forced to leave the country. He had been invited to Copenhagen to work with a choreographer. He stayed on and applied for asylum. He is now a refugee in Sweden. The youngest of ten siblings, he left behind a family of almost 30 members.

Like Anmar, five members of the dance troupe now live in Sweden as refugees, two in Holland, while one lives in Norway and another in Belgium. It took the dancers-in-exile two years to re-group and stage their first performance.

“The first two years after I moved to Sweden were really years of suffering,” says Anmar. Although the Swedish Government generously supports refugees by providing them with a financial stipend, Anmar had to start life again from scratch; what he calls ‘going back to the womb’ (probably a transliteration of a phrase from Arabic). He had to learn two foreign languages, English and Swedish. He had to learn to operate in an entirely new culture, one where dancing had less to do with emotions and more with entertainment.

As a group of dancers-in-exile, although Anmar and his friends were enthusiastic and close knit, they were essentially lost. Suddenly, bombs, bullets and conflicts had taken over their consciousness. So they gave their group a new name. They now call themselves Iraqi Bodies.

The troupe was in India recently, participating at the Attakkalari India Biennial 2011, a contemporary dance festival in Bangalore. They performed a piece called The Sleepers, choreographed by Anmar Taha.

At the beginning, it had more to do with expression than performance. In Anmar’s words: “Expressing anger, hate, all the things I’ve been through in life.” The Sleepers is focused on the moment before death. The protagonists are victims, people who didn’t make it to the safe side. It is about people who get killed for no reason. Like the deaths which came to claim members of his troupe in Iraq. “It’s hard to talk about it,” says Anmar. “It’s horrible.” He still doesn’t know why he and his friends were targeted—if there was any logic to it. “You could be a hair stylist and get killed too,” he says.

They wear blindfolds for the performance, but rehearse without them. That is when you realise that being blindfolded has little to do with the cloth tied over one’s eyes. Their gaze is blank and unfocused. It conveys utter disorientation. The artists perform certain movements in a loop, doing it over and over again, delving ever deeper into emotions that galvanise the whole performance. They rehearse walking with broken limbs, feeling their way around with twisted wrists. They rehearse the rigor mortis that sets in, even before death.

There is a scene where one victim realises the existence of the other. Blindfolded, it is the stiffness of the corpse that betrays its state. The person alive literally touches and feels death. Although this scene is rehearsed, it doesn’t make it to the final stage—because each performance is adapted to the setting. Watching them rehearse, one realises that they aren’t really playing their parts at all. They are the characters. This isn’t a situation they are exploring, it is their reality.

Anmar’s choreography is heavily influenced by the ‘Theater of Cruelty’, a theory propounded by the French performer Antonine Artaud in the late 1930s. “I like his theory because I can relate it to my observations,” he says. “There is no beauty or ugliness, it is how we identify it.” As Anmar directs the artistes, his chief instruction takes the form of a single word: ‘slow’. Everything must be in slow motion. Reducing the pace, reducing actions to minimal movements, helps them find their rhythm. Through all the darkness and violence, there is a rhythm. “That’s what I’m working really so hard with. To make this rhythm clear,” says Anmar.

He finds inspiration and solace alike in the Japanese style of dancing called Butoh that transcends definitions of art and restrictions of class. “It was developed by two people, one was an artiste, and the other from the army. It happened in the early 1960s, they were responding to what they saw after Hiroshima.” Butoh, Anmar explains, is a “state of dance”. “Each human has his own Butoh, an awareness of his body.”

In Bangalore, the packed auditorium is struck silent all through the performance of The Sleepers. Anmar remarks before the show that people who don’t profess to have a sophisticated eye for contemporary dance respond especially well to their performance. It explains why a group of mothers and children in Tehran responds better than an audience in Sweden, for instance.

When the show is over and the group is relaxing in the canteen over some snacks, many from the audience come up and thank them. Some are moved, some are messed up, affected in a manner they can’t quite understand at the moment. Without a clear narrative, cause-and-effect in place, the piece has presented a razor-sharp slice of reality—the street of dead people that the dancers had to negotiate to be here.

Dance as entertainment is too indulgent for Anmar. “It’s not easy to walk out and see dead people. You lose a friend, it’s fine. You see people dying, it’s fine. You continue. It’s very tough, very heavy.”

After his return from India, Anmar is working on a piece called Unidentified. It is about women in veils, inspired by the reality of his mother and sisters. It isn’t a political piece, it is about something more basic. “Those who wear naqab (veils) can also move, walk, talk. They’re human. This dark, covered body can move,” he tries to explain. We all use our bodies to create movement, and we all use movement to create dance. Anmar, it seems, is searching for the Butoh, the state of dance that women in veils possess. For this piece, Anmar is working with three Swedish dancers.

Anmar is comfortable with his identity. Earlier, members of the troupe wanted to break the stereotype of Arabs as troublemakers and fanatics. Now, he wants to focus more on issues, not on nationalities. Working with Swedish dancers is a step in this direction. Although Anmar considers himself generally happy, he has a reservoir of inner emotion he can’t describe or deal with. “I can’t deal with the fact that I have a bullet in me,” he says. “If I remove it, the side effects can kill me. It affects me mentally, unconsciously. Even if I want to express my happiness…” He doesn’t complete the sentence. And you don’t prod further.