Inside the Pocket Museum of Dayanita Singh 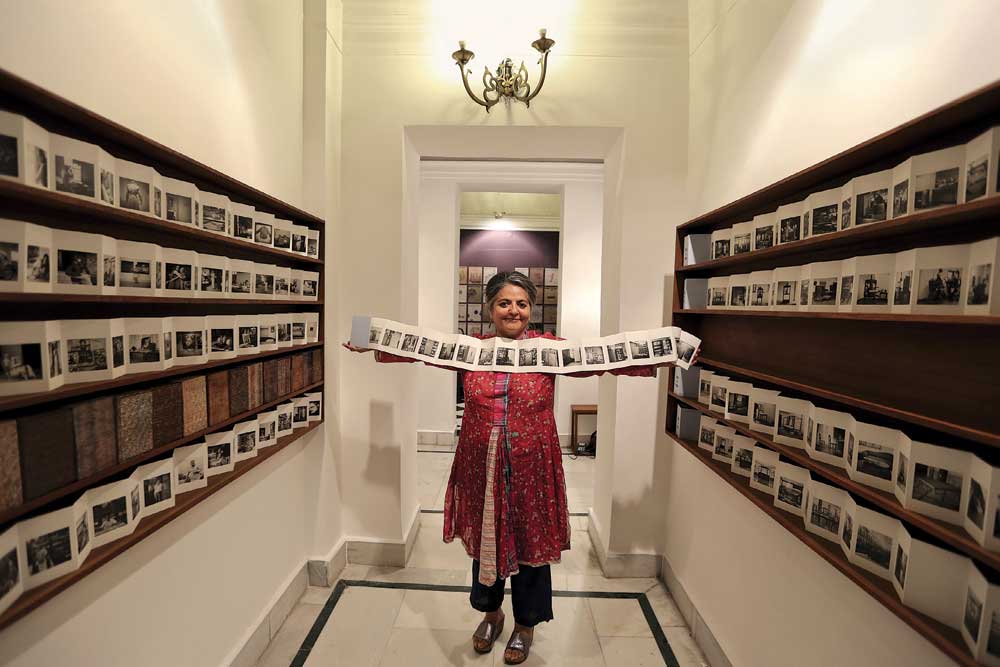 BEFORE WE SIT down to tea surrounded by the old-world charm of the tea lounge at Bikaner House, Dayanita Singh displays her hot-off-the press Pocket Museum. She opens the colourful printed box that serves as the container to reveal nine books that open out into accordion-shaped ‘displays’. These book- objects can be hung or arranged on a table or shelf. Singh begins to arrange them in circles. Soon the café tables become the site for an impromptu exhibition of tiny accordion-shaped books. Even the most cynical critic cannot help but be excited by the possibilities of Singh’s portable museum.

Singh’s latest offering titled Museum Bhavan (published by Steidl, Germany) confirms what we always knew— change is the only constant for the photographer-artist who now likes to be called an offset artist.

“I like to call myself an offset artist because I enjoy the quality and the utility of offset printing. I could have never made these mobile museums if I had to do it with silver gelatin prints. However, I love the quality of silver gelatin prints. But once the forte paper went out of production, the silver prints never had the same feel,” says the Delhi-based, 55-year-old Singh.

For many years now, Singh has experimented with the notion of democratising her artwork and problematising the museum space. First off, the ‘Pocket Museum’ is much more approachable and personal than museums, which often intimidate even the most intrepid art lover with its ostentation and stately aura.

Secondly, it is more affordable than Singh’s limited-edition print on the wall, which costs lakhs of rupees. The entire set of nine Museum Bhavan books is priced at a comparatively affordable Rs 5,500.

“The idea is to invite anyone to ‘curate’ an exhibition of my work. If you are travelling to Bhutan and you take a box with you and pass it around a room, the work gets shared in a unique way. Recently someone opened one of the books in front of the Taj Mahal and took a photograph of it with their smartphone and posted it on Instagram. That is another way of sharing and ‘curating’ the image,” says Singh, who encourages people to interpret the images and books as one would an art object.

So why another set of boxes and how are these different? “For many years, I have been trying to find a way to make the mass-produced book into a unique object. With Museum Bhavan I feel I finally may have achieved this, for there are 3,000 different boxes made for each set of book/exhibitions. So, the person who buys a box gets a unique work of art,” says Singh.

We walk over to where the boxes have been displayed and we see that each box is indeed different. “The boxes are covered in the waste or leftover cloth that is laid down on the first layer of a block print. Each box has its own palette and patina or print. Just as you think one is your favourite, you see another that you may like more,” says Singh, her eyes lighting up. She explains that if one were to collect both boxes, one would have all 16 exhibitions of her works (seven from Sent a Letter and nine from Museum Bhavan).

However, photography is an art form that allows for multiple prints of a single image, and some collectors do wonder about the uniqueness of what they are collecting. “One has to keep challenging what one has done. Hence, I have not repeated any images, except for the image of the girl lying face-down on the bed since that was one of my favourites, and one or two iconic images,” says Singh. “Almost all physical large mobile museums I have shown, at the KNMA, have been acquired and most recently the MoMA acquired the Museum of Chance,” she adds.

But this partnership with Gerhard Steidl and her collection of books is a far cry from her first photo-book on the tabla maestro Zakir Hussain. The story of how it came to be has become an urban legend. In the early 1980s, Singh had gone to cover Hussain in a rehearsal but tripped when she was pushed by an aggressive official. She was subsequently invited by Hussain to tea and the two found great compatibility. Singh photographed the maestro over six winters and the resulting book was published in 1986. “It was my first photobook for which I had done the copy, edit, design and interviews. I had no references for what a photobook could be at that time; hence it was a very simple book. I still like the simplicity of it. But it is not available anywhere now,” says Singh.

WITH A TOTAL OF 12 books, Singh’s other gems include, Myself Mona Ahmed, Privacy, Chairs, Blue Book, Dream Villa, File Room and Museum of Chance. “You know what they say, an exhibition comes and goes, but a book is forever,” says Singh. It is a strange mixture of change and permanence that Singh seeks with her books. While the accordion pocket museums are dynamic in themselves, they are also a constant reminder of her past exhibitions and work. The other books may be static in their physicality, but, one may argue, they also appear new with each reading.

To the ‘what next’ question, Singh says, “You tell me?” In essence waiting for her audience to tell her where her work needs to go. It is perhaps a little of both, given that Singh is a self-possessed artist who has literally carved her own path. From her early days at National Institute of Design, to working as a documentary photographer at the International Center of Photography in New York, she has often found herself struggling in an all-male environment of photo-journalism. The 80s was not really that friendly to women photographers, says Singh. However, over time, with the many options that began to open up, Singh found her niche. As we can see, it is one where it is not just about the image that the photographer creates, but about sequencing, editing and creating new storylines.