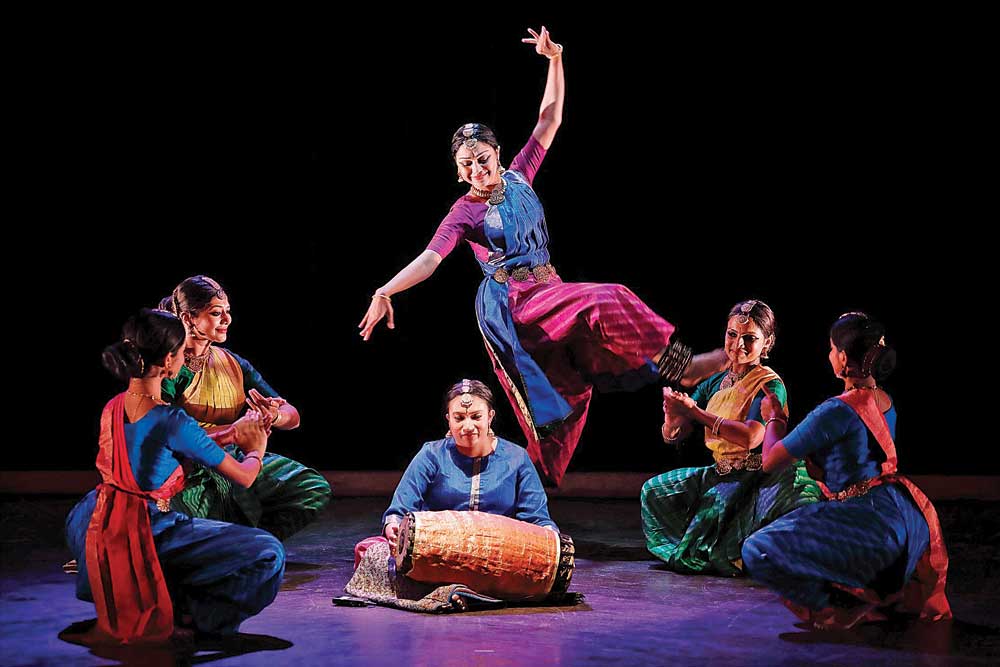 IN THE MID-1970S, Yamini Krishnamurthy had decided to start teaching dance at her South Delhi home in Chanakyapuri. The youngest in the class, a bright-eyed seven-year-old would invariably push ahead of the front row, within inches of the legendary Bharatanatyam dancer.

“Back, move back, kid! You are almost into my neck!” But the exasperated guru’s reprimand seemed to bounce off the child’s unabashed enthusiasm. A few minutes of retreat and she would be right back.

The youngster’s ache to be at the top of her class was understandable. In the days when the capital city was still an unwieldy urban sprawl with a pathetic public transport system, Chanakyapuri was a painful haul from her West Delhi home in Mayapuri—two buses and an auto switch after a quick change from the Loretto School uniform into a salwar kameez. And she was to do this trudge thrice a week, till she turned 18.

By 10, the young girl was ready for her arangetram, the full margam repertoire including a complex romantic varnam roopamu joochi, which she confesses she energetically danced with little idea what it was all about. But not much fazed her then, really. The only time she burst into tears for not measuring up, Krishnamurthy had chided her: “Don’t be like a cat, be a tiger.”

It is a learning that has stayed with young Rama Ramakrishnan, now Vaidyanathan, till date. At 51, she is one of the most admired and loved Bharatanatyam dancers of her generation. And that includes a huge following in Chennai, not known for an open-arms policy towards ‘outsiders’. It did take her 10 years though to wear down the citadel’s resistance to ‘non- authentic’, ‘non-Brahimin’ artistes— the barriers TM Krishna has been militating against.

“Oh, it was a tough fight, often depressing, even humiliating,” she recalls with a woeful laugh. “I did my share of 2pm shows with four people in the hall. But I wasn’t deterred. It took 10 years to get premium timings, top stages there. But remember that only Chennai was eluding me at the point, elsewhere I had been recognised.”

At her home in South Delhi’s Qutub Institutional Area, the basement dance space is given over to Vaidyanathan’s rehearsals and classes. This is also home to Ganesa Natyalaya, a 45-year- old dance school run by seasoned dancer and her mother-in-law Saroja Vaidyanathan.

On a cold winter evening, she sits nursing an ankle that took an awkward twist at the Konark Dance Festival. But the pain didn’t stop her from presenting, along with star Carnatic vocalist Sudha Raghunathan, a specially curated tribute Samadrishti to the great singer ML Vasanthakumari. In an hour- and-a-half long performance, she had presented seven choreographies, investing them with the quiet intelligence and vivaciousness typical of her.

One of Rama Vaidyanathan’s biggest strengths is her remarkable ability to connect with audiences. The aloofness of divas is not for her

She ventured into a tricky ragam tanam pallavi in conjunction with Raghunathan, partly choreographed and partly left to impromptu innovation, very unusual in Bharatanatyam though commonplace in Kathak. “My heart was in my mouth,” she says with a laugh. Not that you could tell.

One of Vaidyanathan’s biggest strengths is her remarkable ability to connect with audiences. Not for her the aloofness of the divas or complex contextualising of dance. Onstage, she is full of zest and brio. She is so arresting, lithe and expressive that she rarely fails to draw in audiences. Even when she portrays melancholia, somehow her dance remains uplifting.

But the line of classicism always remains firmly in place.

“The spirit, joy, abandon and expansiveness in my dance, all that I grabbed from Yaminiji,” she says. “I would often play the role of a 10-minute ‘filler’, doing a hindolam thillana, halfway through her recitals when she would switch from Bharatanatyam to Kuchipudi. Those years with her were lessons in how to get audiences to watch you in a world full of distractions.”

You could see the delicate dance of balance between appeal and creative integrity in her re-interpretation of actor Padmini’s ‘Bharatanatyam’ classic, Aadatha Manamum Undo (Is There a Heart that Does not Dance?) sung by ML Vasanthakumari, for the 1960 film Mannadhi Mannan. This choreography was a dilemma: it could not be staid because the memory of Padmini’s peppy footwork is now the stuff of celluloid legend but mimicking it would have meant going into the filmi turf. Vaidyanathan pulled it off, and with both verve and subtlety.

“Without forsaking the principles of dance, I make sure my audience understands my dance because I am not dancing for myself. So yes, it is an accessible style and I manage that by bringing clarity to the poetry I am interpreting, and that clarity applies to me and the audiences,” she says.

IN TREADING THE line between classicism and popular appeal, Vaidyanathan is more than acutely aware of her own role as an icon and mentor to younger dancers. The competition is fierce and the battle for crowds is intense. “At every point I remember that I am among the goalkeepers of the form’s aesthetics. But I am also a part of its evolution,” she points out. “And the next generation I am mentoring shouldn’t be creatively insipid. We can’t let mediocrity grow though I have to admit that there is some great work being done by youngsters.”

Without forsaking the principles of dance, I ensure my audience understands my dance because I am not dancing for myself. It is an accessible style, says Rama Vaidyanathan

Vaidyanathan is among the few dancers with an easy appreciation of the work done by her cohort. A couple of years ago at the side gate of the Music Academy, Chennai, where dancers come to meet their fans after a performance she stunned everyone by keeping dancer Vaibhav Arekar in an emotional wordless embrace, tears smudging her face.

Despite her own, early start in dance, Vaidyanathan did take a long step back from performances to raise her two daughters and it was not till she was in her late 30s that she began her quick rise to stardom. She was all of 19 when she married CV Kamesh, a technocrat, and her two daughters kept her occupied through most of her 20s. (Her older daughter Dakshina is now a known name in the dance circuit as well.) She did continue her learning under Saroja Vaidyanthan through these years, dancing at the odd sabha or temple. But it was a break she is now thankful for.

“I never resent the time I spent away from the full glare of the limelight because it turned out to be a time for introspection. I perfected my technique in this period, not always on stage but through intellect. What did I want my dance to be? I thought through the question in these 10 years,” she says.

While she is among those fighting to stay true to the solo margam, Vaidyanathan is equally known for her off-beat works. Her breakout choreography in this respect was Mad and Divine, on the life of two mystical women poets, Lal Ded and Janabai. Presented for the first time in 2011, and commissioned for dancer Anita Ratnam it brought her a whole new world.

“It showed me where to go with choreography and understand my own strengths,” she says. “Informative” is how she would like her dance to be, more than “entertaining”, pointing to her fabulous interpretation of Kamban’s portrayal of Ravana. This is the mighty demon king contrite outside Sita’s chambers the night before he knows he will lose all in battle.

As much as she is a joy to watch for her physical vivacity, Vaidyanathan is also a connoisseur’s delight for her internalised abhinaya. Again, that treads a fine line between being expressive enough to be accessible but quiet enough to not feel overstated as often happens with classical dances. And nowhere is this more visible than in her presentation of sringara.

In her tribute to MLV, she included a lovely piece where a friend pokes fun at the nayika emerging with nail marks from the chamber of her lover, in this case, Lord Venkateswara. It would have been easy enough to turn this into a brisk choreography weaving a lot of pouting and prodding. Vaidyanathan kept it wonderfully modulated, with the faintest trace of a smile and self- deprecatory humour, investing her sakhi with immense grace.

Vaidyanathan enjoys great popularity in the west, especially the US. Part of the reason is her immense adaptability to context and audiences. At the Erasing Borders festival in 2013 she cheerfully performed the mayuri allaripu at the Battery Park in Manhattan with joggers slowing down to watch the vision.

This ease could also explain why dancer Tanushree Shankar chose her to execute her wildly offbeat idea of getting urban dancers to do a 10-day stint with Vaidyanathan and present their learning to the audiences at the first edition of the Serendipity Arts Festival in Goa.

“Every day we had two hours of adavu sessions to create three pieces. These were fit bodies trained in modern dance and forms like salsa so they could manage jumps and leaps but could they acquire a Bharatanatyam body, its stillness and control, that was my challenge. Could they emote for abhinaya?”

The result she says was a triumph of dance. The araimandi (half squat) was a killer for them, as was the immobility of face. But they finally pulled it off, not that anyone would be conned into thinking they are veteran Bharatanatyam artistes but certainly that they had reinvented their dance philosophy for 45 minutes of an evening.