The Catholic church in India is out on a limb to indigenise. Images such as Jesus seated on a lotus in padmasana and the Virgin Mary clad in a sari are now commonplace. 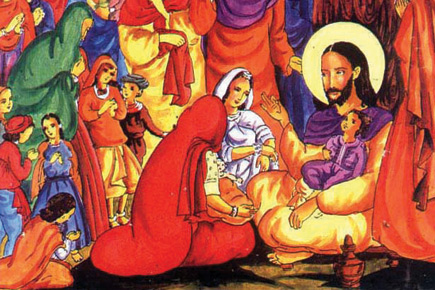 The Catholic church in India is out on a limb to indigenise. Images such as Jesus seated on a lotus and the Virgin Mary clad in a sari are now commonplace.


After Father Sebastian Rodrigues administered the wedding vows to Rebecca Sarkar and Alan Felix at the Sacred Heart Church in Burdwan, West Bengal, he didn’t ask the groom to kiss the bride, as is the usual practice in church weddings, but to smear sindoor (vermilion) on her forehead after exchanging garlands and tying a mangalsutra (Hindu wedding necklace) around her neck. And then, conch shells were blown to solemnise the marriage. The bride wasn’t dressed in a white wedding gown, but a red Banarasi silk sari. Behind Father Rodrigues, in the sanctuary of the Church, two huge murals depicting the Birth and Resurrection of Christ stand framed in a palanquin, while a statue of Mother Mary, with an infant Jesus, is draped in a green sari.

Burdwan, explains Father Rodrigues, was once a centre for making palanquins. “There are many other Bengali Hindu and Adivasi (as many members of this congregation are) rituals and practices we’ve taken,” says the Parish priest, “People, after all, have to see the Church as their own, and to make it so, the Church has to be local and indigenous in nature.” The windows of the Sacred Heart Church, which dates back to 1870 and was rebuilt two years ago, have stained glass paintings depicting the ‘mystery of the rosary’—with all the Biblical characters dressed in Indian clothes and with Indian features. Worshippers squat on the floor—there are no pews here—and watch the priest performing aarti (a ceremonial Hindu blessing) with an oil lamp. There’s even a place inside the Church for hom (a sacrifice to fire) on occasions like Christmas. The exterior of the Church has strong elements of Hindu temple and Mughal architecture.

The Sacred Heart Church at Burdwan is not an aberration. More and more churches across the country are proudly displaying elements of local culture, while priests incorporate traditional Hindu and indigenous (including tribal) rituals to conduct liturgical celebrations. Murals, paintings and statues in churches across the country now show Jesus and other apostles in dhotis and lungis, sitting under banyan trees or even bearing articles like the kamandalu of Hindu sages. At a church in Bangalore, Jesus wears a dhoti and sits cross-legged, Indian-style, on a lotus—in the manner of a Hindu deity. A church in Hyderabad proudly bears a mural showing Jesus bathing in a river with Hindu temples dotting its banks, suggestive of the Ganga.

The architecture of many new churches marks a distinct departure from the earlier European style: a church in Bangalore could be mistaken for a Hindu temple, while another near Amritsar has gurdwara-style domes. The Cathedral in Kohima, Nagaland, is an architectural marvel and looks like a traditional Naga house. In Shillong, a huge mural at a seminary has a tribal-looking Jesus standing under a pine tree, surrounded with men and women in traditional Khasi and Garo tribal attire.

Within a few months, large murals depicting the Last Supper with Jesus and His Apostles and disciples—all clad in dhotis, sitting cross-legged on the floor and having roti-subzi on a large plantain leaf with their hands—will be installed at a few churches across India.

This is all part of the process of inculturation sanctioned by the Second Vatican Council in 1965, a process which picked up after the Jesuit decision to pursue it with vigour at their 34th general congregation held at the Vatican in 1995. Inculturation, says a document issued then, is ‘one of the fundamental aspects of the Church’s evangelisation mission and points to the mutuality between the Gospel and the culture it engages’. Further, it states that ‘The Christian message is to be open to all cultures, bound to no single culture and made accessible to every human through a process of inculturation by which the Gospel introduces something new into the culture and the culture brings something new to the richness of the Gospel.’

Elaborates Father Babu Joseph, spokesperson of the Catholic Bishops’ Conference of India (CBCI): “This is all about promotion of Christian values through local cultures. Christianity was generally identified with European culture, styles and traditions, but there has been a marked change in recent years. Christian values and life can be expressed in diverse forms.” Also, he contends that “there is no uniform Indian church”, with liturgical practices varying from region to region. “In Kerala,” he adds, “worship and customs closely resemble that of Hindus, while the Adivasi influence is very pronounced in central India and the Northeast.”

Father Barnes Mawri, director of Shillong’s Pastoral Centre, says that the rituals, articles and expressions are completely local in most of Meghalaya’s Catholic churches. “We use Khasi musical instruments and beats for carols. We also have statues of Lord Jesus dressed in traditional Khasi attire (dhoti and waistcoat) and headgear, Mother Mary in a jainsem (Khasi ladies’ dress), and we’ve introduced Khasi rituals into the Church,” says Father Mawri, adding that pyneh rngiew, a traditional Khasi ritual of casting away evil spirits, has also been introduced by some priests.

“Earlier, when Christianity went to an area, it ignored all local traditional practices and cultures and imposed European traditions. That has changed,” says Bishop Cyprian Monis of the Burdwan Diocese, “It is wrong to say that local traditions are pagan or unacceptable… in many churches in Bengal, aarti and conch shell blowing form part of all celebrations and worship. This is a beautiful Bengali or Hindu practice we’ve incorporated.”

But the process hasn’t always been an easy one. “In some areas, inculturation is a bit difficult. Usually, the older generations who are used to the European style of worship or celebrations have some reservations. We’ve also seen that in some areas, those who’re new to Christianity tend to be more orthodox,” says Bishop Monis. “We hold extensive discussions with the laity (members of a church’s congregation) and enlighten them on the benefits and beauty of inculturation and the need to take the good from all religions and cultures. People generally understand and appreciate this,” he adds.

An inculturation project involves consultations with the laity, understanding local customs, studying them properly and then deciding on what objects, articles, designs, rituals and practices can be modified or adapted, says Bishop Monis. Here, an important role is played by Subrata Ganguly (see accompanying feature), who designs and executes all these projects in association with the dioceses.

And this is just the start, even though the Catholic Church in India has long outlived the look and feel of its European provenance. Even a decade ago, Bishop Monis says, Catholics would have been aghast at the sound of a conch shell blowing inside a church or a yagna being held as part of the Holy Communion. Today, none bats an eyelid. And tomorrow, the process may cross more religious boundaries.