A Pakistani artist drew his own blood, half a litre of it, to paint this portrait. But the wait for a visa is discolouring it 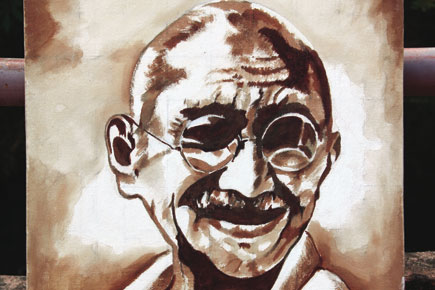 A Pakistani artist drew his own blood, half a litre of it, to paint this portrait. But the wait for a visa is discolouring it


The first few times, a nurse helped him. Then, every few days, for two months, A Waseel Awan would strap a belt to his left hand, tap at his veins, and insert a syringe and draw 20 ml of blood. Since blood would dry up fast, he could not use a palette and instead needed a little airtight case that he had to shut promptly after dipping his brush.

Waseel, aka Painter Babu, a calligrapher who works in Lahore, Pakistan, has drawn a 3 x 2 foot portrait of MK Gandhi with his own blood, and wants to present it to the Indian PM Manmohan Singh as a token of peace from his Pakistani brethren. “To win nations, you shed others blood. To win hearts, you draw your own blood,” says Waseel.

The process was painful, he says, more so considering that as a calligrapher he also had to attend to his quota of regular work. But two months of delicate work and almost half a litre of blood later, his portrait of Gandhi in dried-up crimson and without the use of any other colour, was ready.

But why would a man want to go to such extreme lengths in the first place? “In 2005, when the Indo-Pak border was opened for a cricket match and I visited India, I was moved by the hospitality of Indians. I realised that Indo-Pak enmity is political, and culturally and socially, the two nations are so similar. I was angry and wondered what I could do as a common man,” Waseel says by way of explanation.

Facing down his own discomfort at drawing blood and without the luxury of looking away, he continued, and on 9 August 2009, he was ready with it. He wants to present the portrait to Prime Minister Manmohan Singh. But the authorities have denied him a visa, saying even if they did, he wouldn’t be able reach the Indian PM.

Others travelling to India have urged him to give them the portrait so that they can present it to Manmohan Singh. But, having drawn his own blood, he was not willing to compromise on his goal of presenting it himself, no matter how long he has to wait.

Waseel has not read Gandhi. But he says Richard Attenborough’s Gandhi, and the Mahatma’s call for peace, moved him enough to do this. “The Indian Subcontinent is a land of peace, of Sufis and saints and fakirs and sadhus, of enlightened poets and spiritual beings. How did this land get engulfed in such enmity?” he asks. He laments that like many others, most Indians consider Pakistanis a country of terrorists. “Please tell your countrymen not to judge the nation by a few extremist elements. The common man here wants as much peace as you do,” he says.

Blood, being a coagulant, blackens and hardens in contact with air. In its current shape, the painting looks decoloured. The blood is also chipping off at places. Like a man talking of refurbishing his house, he says he has plans for the painting. He would have to draw more of his own blood to ‘lighten up’ the painting and ‘repair’ the wear.

Ask him about his spirit of optimism and Waseel’s laughs. Perhaps it’s because my blood group is O+,” he says. What this man with the universal
donor blood group does not know is that Mohandas Karamchand Gandhi too had the same blood type.