India is finally getting to Pondicherry. Its quaint French character is being overrun by an urban Indian ethos. 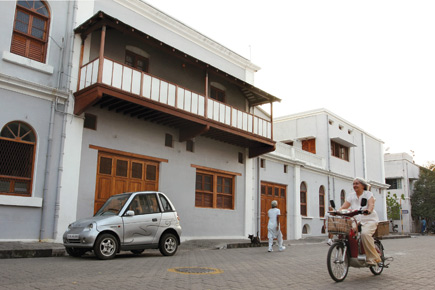 India is finally getting to Pondicherry. Its quaint French character is being overrun by an urban Indian ethos.


Mouhamad Moustafa is a genial man. But this former officer of the French Air Force is also worried. “I am caught between a rock and a hard place,” he says. Moustafa, a French citizen of Indian origin, is Pondicherry’s former representative to the Assembly for French People Residing Abroad. About 7,000 registered French citizens living in India elect such Assembly representatives, or Advisors, every six years. For the last few years Moustafa and other members of this minuscule population have been fighting: to stop the destruction of the Frenchness of Pondicherry.

This textile city, once coveted by the Dutch, British and French, and the darling of tourists from across the world, may soon lose the very thing tourists come here for—the French India. Unless steps are taken quickly, the former French colony could soon become another Tamil city. “There was a time when even the cycle rickshawallah would speak French,” says musician MP Shivan. “Now, Tamil language and culture have been imposed, and even the French, who have a consulate here, are quietly withdrawing.”

For people like Moustafa, it’s their heritage at stake. They have enviable property holdings and have therefore become the target of the land mafia. “There are at least 200 such properties belonging to French nationals at risk. Recently, there was the case of a ruling party legislator who threw out the tenant and grabbed the property—a big colonial house. I intervened, but the police refused to register a complaint.” Most of these 7,000-odd French citizens spend a lot of time in France, and stream back in July-August, when France observes its three-week national holiday. The two countries have a treaty on the status and protection of these people with dual allegiance.

Moustafa wears his Indian and French personas very well. When he turned 18, he left Pondicherry to join the French Air Force as a non-flying officer and served from 1966 to 1995. He then worked in the French embassy in Tunisia. He has also received the Chevalier de l’Ordre National du Merite, or the Order of National Merit, a high civilian award.

When the French left Pondicherry in 1954, “as a sign of gratitude, one could declare an ‘option’ to become a French citizen, before a certain date”, says Ananth R, press officer at the French Consulate.

Many did, but a majority did not, as there were rumours that those opting for French citizenship would be conscripted to fight in Algeria.

Chennai-resident Dhiren Raj, who grew up holidaying in ‘Pondy’ on weekends, says he’s shocked by the cultural changes. “It has now become like any other small town in Tamil Nadu. Except the French Quarter, which is still the same for over 20 years that I have been coming here, the rest of the city has no relationship with that part.’’

That Pondicherry is now synonymous with cheap liquor is bugging some citizens no end. Sales zoom as hordes descend on the city during Christmas-New Year holidays. Throw a few locals into the fray and it’s the perfect recipe for nuisance, says long-time resident Shanty Rayapoulle. “With rapid expansion, the city has changed radically,” she says.

Rayapoulle, a classical dance teacher and librarian at the French School of Asian Studies, is a French citizen working here for the last 20 years. “My surname is reminiscent of the regional Pillai, which was spelt Poulle, to be easy on the French tongue.” She is at ease with several languages, including French, English, Tamil and Sanskrit, and comfortable with her Catholic identity. She says residents of her hometown lack “self-discipline”, a reason why she packed off her 23-year-old son to Paris for an advanced web-designing course.

Even 25 years back, beyond Mission Street, one of the last roads parallel to the seaside, it was just a swamp. Today, that’s where the new town has sprung up; a bustling new centre completely contrary to the serene French Quarter with its spacious Madras-terrace bungalows and neat avenues. The French Consulate is located within the French Quarter in a 400-year-old renovated structure still fortified by its original thick earthen walls. “It is so thick that it blocks cell phone signals,’’ says Ananth.

“All said and done, the tag ‘Made in Pondy’ has a value attached to it,’’ says Dilip Kapur, founder of internationally renowned leather goods brand Hidesign, who jokes that he is the Union Territory’s self-appointed spokesperson. Kapur grew up here speaking seven languages. “That is the kind of heritage the city had.” His children grew up speaking French in KG and the best schools in Pondicherry still only teach in French. Having said that, Lycee Francaise, a coveted French educational institution, now teaches in English too. Kapur adds, “The people who maintain French culture are Ashramites and Tamil French citizens. But for them, Pondy would have been in the boondocks.”

Kapur has also contributed to saving its heritage. Le Dupleix, a hotel built by him, was named after a governor-general who lived with his Indian wife in the Indian part of town. “When his house was torn down, we lost the battle to save Pondy’s heritage,” says Kapur. Le Dupleix is built in typical French-Pondy style and blends with the old heritage buildings all around it—some 1,300 of them. There are plans afoot to secure a Unesco World Heritage site status for the French Quarter.

The government almost botched up the idea when it permitted an eight-storey structure to be built on Beach Road, breaking its own building laws. Concerned citizens had to rope in fishermen to stave off the proposal.

Romain Rolland Street has lots of heritage structures aching for restoration. Chandra Mohan, a contractor restoring an Ashram property that will soon become a home for senior citizens, says a priest probably built this building, which could be more than 150 years old. The beautiful white building has

imposing arches, stained-glass windows and high roof to keep the searing heat out in summer—a typical colonial Pondicherry structure. The building, with entrances both on the promenade and the inner street, was probably

a church on one side, with a parish at the back. In 1993, the French government funded a streetscape restoration project. There was another Asia Urbs project in 2004 to develop another stretch of the French Quarter.

Explains Jean de Loche, an expert on military architecture: “During the Dutch occupation, from 1693 to 1699, they planned a large new town with a geometric layout, rectangular blocks of houses separated by straight lines intersecting at right angles. Each block was meant to house different Indian communities, the colonists, and the government quarter.” The French found this plan viable and completed it by 1721.

Even now, the roads here are straight lines intersecting at right angles. In the blocks, there were Hindus, English-speaking caste Christians, French-speaking caste Christians, Muslims and ‘untouchable’ Christians—a peculiar combination that existed during French rule. But the French heritage is now under attack. In the name of nationalism, we could lose the unique charm of this beautiful easy-going seaside town.