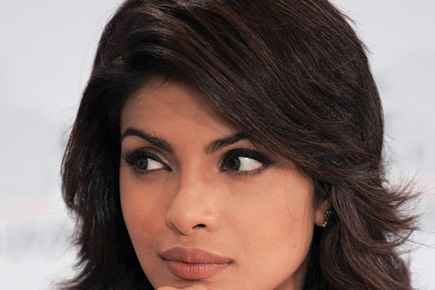 
At 4 am, Priyanka Chopra was jolted out of sleep by a hysterical male voice. “PC, Jalwa ho gaya,” said director Madhur Bhandarkar, bellowing out the news that Priyanka had won the National Award for her performance in his movie Fashion. Priyanka did what many 27-year-olds would—she let out a little high-pitched scream in her hotel room in New York, called her dad in India and cried over the phone. The next morning she walked onto the sets of Anjaana Anjaani “looking like a raccoon” after a sleepless night spent tossing about in excitement. “I felt like what Sachin Tendulkar must have after scoring a century,” she says.

That was more than two months ago. Since then, Priyanka has accepted her award, fervently praying on-stage that she wouldn’t trip over her sari and “fall over Madam President” during her big moment.

After shooting for two months in New York, Las Vegas and San Francisco with Ranbir Kapoor, the actress landed back in Mumbai to announce that she had signed on as the new host of Khatron Ke Khiladi. She then flew to Kashmir for Vishal Bhardwaj’s Saat Khoon Maaf. In preparation for this film, she had participated in a 20-day acting workshop with Naseeruddin Shah. She’s back in Mumbai now for four days to shoot a commercial; then she is off to Bangkok and then Coorg to shoot her new movies. After that, it’s the Khatron Ke Khiladi shoot in Brazil, and finally a reunion with Farhan Akhtar and Shah Rukh Khan for Don 2.

Didn’t she check into a hospital last year after fainting on the sets from stress? “What do I do? I think of movies even when I’m free, so I might as well be working,” she says giggling, admitting that the one thing her mother, gynaecologist Dr Madhu Chopra, still nags her about is having her meals on time.

Strangely, our interview happens on a rather dull day when Priyanka has been lolling around for four hours, waiting for things to fall into place. She’s shooting a shampoo ad in a shabby studio in Powai. There are planks of wood everywhere and carpenters hammer away until a short, bald man walks in and launches into a tirade against the sawdust billowing up in clouds. Someone pulls up a white plastic chair, but then Priyanka’s publicist comes up and ushers you into her make-up van. There are about five people in the van, Priyanka is in a black tank top and track pants, her hair in pink rollers. Everyone is murmuring, “Costume crisis.” Someone grumbles about the AC not blasting cold air. I sit on another plastic chair and try not to stare at a bunch of carefully combed out hair extensions laid out on a sofa and some rogue strands on the floor. A famous female designer steps in; the van gets almost claustrophobic now. Priyanka and she discuss nips and tucks in the adjoining private room. While the designer dashes out to fix the white dress and the huddled group moans about wasting the star’s time, Priyanka calls you in.

It must be a royal pain to sit around for hours, your hair in tight rollers?

“What can you do?” says Priyanka calmly, “I could throw a shit-fit and bring the house down, but what purpose would that serve?”

Perhaps it is this sanguinity that has helped Priyanka float above disasters. This year started with one—Pyaar Impossible—but the star has also tided over the shambles of Love Story 2050, Drona and God Tussi Great Ho in the past two years. “I know, I know,” she says rolling her eyes, “but critics have been kind to me. I haven’t borne the brunt of those flops. I’m a small part of the movie; I just try to make my character believable. I’m not from a film family (Priyanka grew up in Jamshedpur) and I started working when I was 17. I pick my roles depending on what movies I’d like to see. I go up a grade, I fail, I get up from the floor, dust myself off and start over.”

Luck smiles on her too—she also had Fashion, Dostana and Kaminey in 2008 and 2009. So how did she swallow a bitter pill like What’s Your Raashee?, where she played 12 roles in 12 different sun signs? “Your heart breaks a little when your film doesn’t work,” she says thoughtfully. “It’s almost like a break-up.”

Her other heartbreaks have been subjects of intense media interest. There are speculations now on whether she and Shahid Kapur are on or off (the actress reportedly dumped him because he was a stick-in-the-mud and disapproved of her partying). Part of her love lore is the public groaning of her Love Story 2050 co-star Harman Baweja after she left him. Priyanka insists she isn’t seeing anyone currently. “I don’t have a boyfriend. I’m single; it’s official. I’ve fallen in love in the past and it will happen in the future. I’d like someone to complete me, but I have my family and friends. I’m not lonely.”

It helps that Priyanka has a hectic work life. The actress says she had her first holiday in six years when she went to Koh Samui, Thailand, in 2009 with her gal pals. This year, she’s signed a mixed bag of films, including the new Anurag Basu film Khamoshi starring Ranbir Kapoor. This love triangle has Ranbir playing a deaf-mute and Priyanka as a mentally challenged girl. The third angle was meant to be Katrina Kaif, yet the papers this morning say that Priyanka elbowed Katrina out of the project. “That sounds terrible, oh please! Anurag spoke to me about it when I was in the US and I was really excited about the movie, knowing that there would be two heroines and that Ranbir and Katrina had been signed on. I’m going to go ahead and do it,” says Priyanka. The implication is clear; it’s Katrina who has the problem, not she.

It’s famously said that actresses can’t be friends, but Priyanka figured it out herself on Koffee With Karan in 2006. She guilelessly declared that she was friends with Kareena Kapoor, not knowing that Kareena had declared on national television that she would rather be acquaintances with PC than friends. Asked today if she has any actress friends and she’s forthright. “Actually, no. I’m not here to make friends; I disconnect after work. I got along with Lara (Dutta) and Kareena when we worked together, but that’s a movie-to-movie thing.” What she does invest in is her Twitter time, having more than 340,000 followers and tweeting about five times a day. She maintains a hugely cheerful, I-love-life, woo-hoo attitude on the social networking site, but says that like any Cancerian, she’s subject to mood swings and it shows up in ‘I feel lost today’ tweets.

For now though, she’s punch drunk on life after the National Award and on bagging Khatron Ke Khiladi where she replaces Akshay Kumar as the host. The two were what the film trade called a ‘hit jodi’, but they haven’t worked together since Waqt in 2005 after the Bollywood grapevine insisted they were ‘too close for comfort’.

“I can’t fill Akshay’s shoes in Khatron Ke Khiladi because they’re too big. He’s the original stunt hero. What I can do is take it forward,” she says. So what gives her the heebie-jeebies? She ponders for a moment: “You know, I’ve eaten a roach, tried a maggot, had boas and cobras wrapped around me, picked a rat up by the tail once from my hotel room and thrown it out, gone deep-sea diving, done bungee jumping and white water rafting. I’ll find out what I’m scared of on the show. Probably leeches.” Of being covered with them? She shrugs, “No, you can get them off with salt. No, I meant putting leeches in my mouth.”