he Indian Museum in Kolkata recently broke open some cupboards lying forgotten on its premises. It yielded an exhaustive set of British records for natural dyes and textiles used in 17th century India 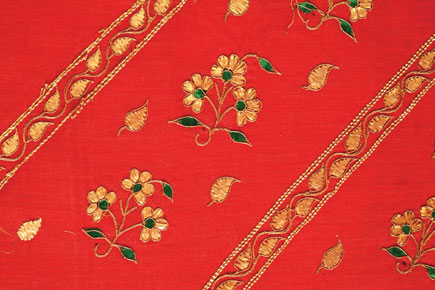 The Indian Museum in Kolkata recently broke open some cupboards lying forgotten on its premises. It yielded an exhaustive set of British records for natural dyes and textiles used in 17th century India


Not skeletons, but a treasure trove of vibrant colours and textures has been tumbling out of long-forgotten, dusty cupboards in the musty corners of the Botanical Survey of India in Kolkata. Vibrant hues of red, blue, indigo, orange, yellow and hundreds of shades in between, mounted on cardboard and pasted on huge leather-bound volumes, this is perhaps the only surviving archive of the natural dyes that were prevalent in this part of the globe about 150 years ago.

Fifteen such volumes, with over 3,000 samples of dye patterns made from extracts of about 64 plants, literally tumbled out of cupboards in the Industrial Section of the Indian Museum a few months ago. The samples had been painstakingly collected and chronicled by an English gentleman, a silk dyer named Thomas Wardle, in the late 18th century.

HS Debnath, joint director of the Botanical Survey of India, which operates under the museum’s Industrial Section, says, “After I took charge, I started making an inventory of the things lying around. I found a number of wooden cupboards with ancient British locks in the heritage section. I sent out a circular, asking if anyone had any personal belongings in these cupboards, and if so, they should stake their claims. After waiting out the stipulated period, I broke open the locks and discovered this treasure trove.”

Apart from Wardle’s chronicle of natural dyes, the museum also came upon two series of John Forbes Watson’s Textile Manufactures and Costumes of the People of India, dating back to 1866. These volumes chronicle the rich heritage of textiles that originated from the handlooms of India. Samples of Dhanekhali, Phuleswari, Tangail, brocade, Benarasi, Kalamkari styles, all dating back to the 17th century, have been painstakingly catalogued, mounted and preserved in huge tomes.

The chronicles of both Wardle and Watson are priceless in terms of the knowledge they contain, given what they can do for the revival of India’s indigenous textiles. The East India Company had sounded the death knell for countless handlooms in India with the advent of their cheap powerloom fabrics. But here was a reporter of the country’s products at the India Office, London, who was inadvertently preserving Indian secrets that the Company hoped would be lost forever.

Watson (1827-1892), who began his career as a physician with the Bombay Medical Service, had an avid interest in the botanical wonders of India, and from 1862 onwards found himself drawn to the India sections of several international exhibitions.

There was so much to showcase globally that Watson dreamt of a ‘portable industrial museum’, which led to the publication of The Collections of the Textile Manufactures of India in 1866, 18 volumes of classified samples of Indian textiles, containing 700 examples in all. The samples were mostly taken from textiles shown at the 1855 Paris International Exhibition, but some came from previous museum acquisitions. Many of the remnants survive as part of the Victoria & Albert Museum’s Asian textile collection.

Thirteen sets of the books were distributed in Britain, mostly to textile manufacturing districts; seven came to India. A second set was published in 1873-77, each set including more than 700 samples, taken from textiles shown at the Paris exhibitions of 1855 and 1867. A companion volume, The Textile Manufactures and the Costumes of the People of India, published in 1866, contains explanatory text and illustrations of how the fabrics were worn as clothing in India. The textile samples were intended to inspire students and textile manufacturers in Britain, and also to alert them to the opportunities of the vast Indian market.

Watson often included notes on cost, who might wear the complete piece, and how. The sample sizes in the first series are usually about 34 x 19 cm, and in the second series 19 x 10 cm, with an additional piece of about 4 sq cm ‘for examination of texture’.

While dyeing as an art was once thought to be a preserve of the West, Debnath says that Indians, Egyptians and the Chinese too had indigenous expertise in this art form. India, in particular, was rich in raw materials capable of producing a great variety of colours, and although chemistry as a modern science was not understood by Indians, the results of happy accidents and elaborate experiments had yielded over 3,000 dyes. The International Exhibition of 1851 showcased the rich variety of Indian dyes and shades, and soon Europeans wanted to acquaint themselves with them.

As Wardle wrote to Her Majesty’s Secretary of State for India in February 1875, ‘India possesses a large number of dye-stuffs, many of which are practically unknown to English dyers, no doubt mainly owing to the absence of any descriptive work on the subject and inaccessibility of information … The number of Indian dye-stuffs with which I am practically acquainted, such as indigo, madder, safflower, catechu, cochineal and a few others, constitute only small portion of those which India produces and which I think might be very advantageously applied on the spot if they were only made known here and their properties practically investigated.’

The British, Debnath explains, would only be interested in exploring anything that held commercial value. And Wardle, having hinted at the possibility of the huge commerce that Indian dyes could generate, instantly got the ear of the Crown. It was as a response to this correspondence that Wardle compiled the 15 volumes of 3,000 samples of dye patterns.

According to records, three copies of these 15 volumes were made and kept for reference. There is no trace of the other two copies, making the one in the Indian Museum all the more valuable.

And yet, many secrets seem destined to remain so. As Wardle wrote, ‘It was not…within the limits of ordinary prudence to publish the means by which I obtained the best results, because to have done so would have laid open the business methods to the public which are private property and on which the successful nature of such a business depends. This could only be done upon adequate compensation for the value of knowledge supplied.’

Debnath says that this was absolutely true, given the intellectual property rights of Indian artisans. According to him, “Our government must think of establishing a central natural dye board along with a natural dye research institute to further our knowledge in this sphere.” Meanwhile, he is making use of Rs 1.5 crore provided by the Union Environment Ministry to digitise and restore the 10,500 botanical paintings, 2,000 samples of textiles and 3,000 samples of dyes unexpectedly found in the cupboards.